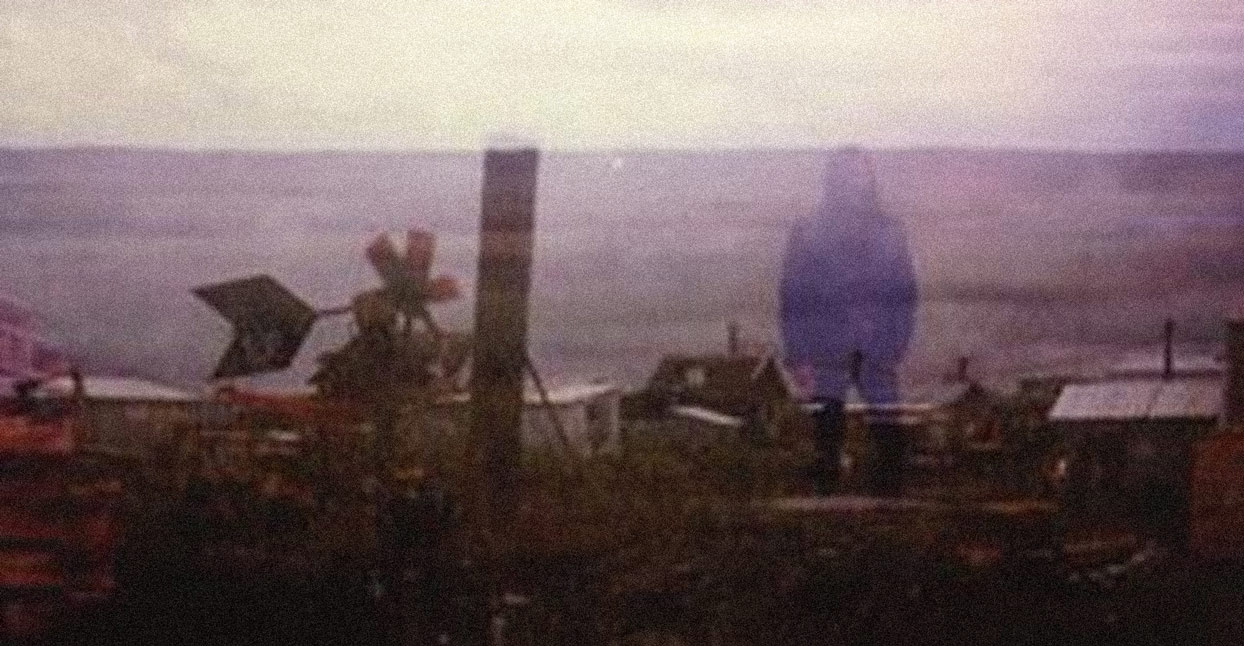 I met Abdul Hakim-Bilal, aka Grey Wulf, in territory familiar to both of us: a crusty, Angela Davis-poster-splattered, anarchist community center in the middle of West Philadelphia. His band was setting up while I was DJ’ing; as they plugged in, the sound of a dirgey guitar ripped through the soundboard. I looked over and a wiry, tall guy with dreads and an army coat was fiddling with knobs, ready to wreck. “This should be good,” I thought, and I wasn’t disappointed. Hakim-Bilal’s band Among the Rocks and Roots proceeded to smash through a set of chaotic, thundering noise, part wooly Viking incantation, part Afro-Indigenous ritual, that left the space even more damaged than it was before they took the stage.

It’s Grey Wulf, Hakim-Bilal’s solo project, though, that seems particularly relevant now, in these politically unprecedented times—as Grey Wulf, he speaks to even darker, weirder edges of music and culture, conjuring fringe dreamscape-cum-apocalyptic death marches. Take the song “Fated Grips Around the Neck of Destiny,” where Hakim-Bilal wraps the listener in a cocoon of impossibly beautiful sounds, only to reveal a more sordid, darker core beneath. Grey Wulf walked those edges of beauty, danger, and reality with us in a conversation about place, carving out space, and finding a light in the dark.

I wanted to start off talking about darkness and existentialism. Is it accurate to classify your sound as “dark”? Is there hope in “darkness” or a questioning of existence?

I tend to float between those questions often. On one hand, i know there is such endless beauty in this world, [in] the non-ordinary, but i also understand that one must come through the dark before one can stand in the light. When it comes to my sound, I tend to write and create in a very improvisational way. The darkness is just a reflection of those thoughts and ideas reaching out from the abyss of the non-ordinary. It’s funny to me though, I spend less time questioning existence and more time questioning myself, stalking my own actions. Music was my way of understanding why I was doing the things I was doing.

With Among the Rocks and Roots, your music seems to be more cathartic, more socio-political and paradigm challenging. With Grey Wulf, it feels very intimate and introspective. Was this an intentional choice, or did things evolve that way naturally? How does the isolation of working as a solo artist factor into lyric content, aesthetic choices for imagery and how you play live?

Grey Wulf was actually the first time I had ever played music. It was meant to be a free form bass project, in the likeness of Keiji Haino and Stephen O’Malley. Since bass was my first attempt at music, I was writing music for Among The Rocks and Roots before I even knew that would be a band. I just happened to bump into [my bandmate in ATRR] Samuel Goff a week after moving to Richmond and two months after learning bass. We met on the shared platform of sobriety and experimental music. I think I made an off-hand Merzbow reference and he was the only person in the crowd that laughed. We decided to jam a week later and ended up writing our first song, ‘He Would Turn From Wickedness and Live.’ After ATRR was born I needed to separate our sound [from my solo work], so i ended up buying a guitar and sampler and Grey Wulf ended up evolving. I think live, my only rule is to let go and channel those emotions to the crowd. I used to leave a binary drone on a loop before beginning a set, put myself into a trance and do a ritual I learned as a child to open sacred circle. My father being Eastern Pequot, I always gravitated toward those beliefs. ATRR became more of a concept after I started implementing these systems of thoughts and beliefs. Minimalism through density, trying to put myself in a trance to reach heightened states of thought. ATRR being a two piece made it difficult for me to contro,l so it was then that Grey Wulf began to evolve and separate. So by the time i wrote “V”, Grey Wulf had made a full separation from ATRR. It became personal, introspective, less about invocation and trance, more about capturing memories and loss.

On the song ‘Drowned in Your River,’ there’s a lot of powerful imagery at play lyrically, while sonically, it has a ghost-like, barely there quality. I’m reminded of the idea of the black/African body in water and all of the implications of that [the oceans over which slaves were shipped, the history of swimming and segregation, and so forth—ed]. Was that part of the lyrical concept?

With ‘Drowned In Your River,’ that song was actually about a past lover. The imagery came directly from a memory of her looking at me and about how I felt when our relationship ended. I wrote this while I was in Alaska, working on a dock. There was basically no one out there, during those periods of isolation, I felt those emotions much more intensely, it felt like I was being drowned by her, her name being River.

That’s wild that you were on a dock in Alaska. It reminds me of the idea of POC existing in spaces that aren’t ‘meant for us,’ so to speak, and not just in music and art but in the world. Do you find there are parallels between navigating the art and music world hierarchies and the real world?

That was such a powerful experience. Massive isolation, surrounded by mostly conservative minded people. The group of engineers [in Alaska] were actually KKK members. The first interaction I had after landing on the beach will always stick out for me. I was in the kitchen with my friend who convinced me to go out there in the first place; the head engineer came up to me and was asking me if the fried chicken was my idea. I quickly realized that my reaction in that moment could come with life or death repercussions. We are in Alaska with 800 miles of tundra in every direction and that i could easily disappear. Navigation for me became learning more about these people, paying attention to others, giving others my experiences, and trying to understand theirs. I never hid my beliefs from anyone if they asked or made a negative remark about anyone’s skin color, beliefs or sexual orientation. I spoke up and gave my opinion or put my body in harm’s way to protect those who couldn’t protect themselves. I didn’t realize it then, but i was claiming a space. I remember looking up one day at the grading table and on my side are POC, femme and trans-identifying people. Like i said, Alaska was powerful, and I learned a lot about myself there despite my environment. I carry those experiences into the music scene here.

As an experimental artist of color do you find it hard to navigate the ‘noise’ music scene? Has the experimental community become more or less favorable to diversity in recent years? How has that impacted you?

Of course, the problem for me was trying to create something brutal and beautiful at the same time and enter it in the arena of harsh noise. The Richmond noise scene three years ago was void of people of color. Even if you had gotten in [as a POC], it felt like you were becoming a token, which happens to be one of my biggest fears. It ended up making me become more and more reclusive over time. I tend to create music more efficiently during periods of isolation. I ended up wanting to not do Grey Wulf live anymore mostly because of the complexities of trying to play multiple instruments live, and also because my crowds always ended up being white people patting me on the back. Since the rise of people of color in the Richmond noise scene, I’ve been known to break my rule of not playing shows.

You mentioned forming bands and starting to play music immediately after learning instruments. How long was this process and what was driving it? It seems astonishing that the level of technicality and creativity you’ve achieved has come after only a few months playing the various instruments.

I can assure you, the process is ongoing. As much as I grow with instruments, my goal was never to be technically proficient—like, I can only play things i write, so far. I see myself as a composer if anything. I learn to a certain point out of necessity. My only goal is to capture the sounds floating within myself and that turmoil drives my exploration with these instruments. It feels like I’m constantly going through or pushing against some barrier within myself. This internal battle has always been such an endless well to pull from. I usually get to a plateau and then it’s time to create, growth happens during these times, internal growth. I clean house and then return back to my friends and family for another batch, with each new experience and interaction i dredge up some more things hiding within my subconscious and then it’s back to square one again.

What’s next for Grey Wulf? Any albums or collaborations we should look out for?

I know that ATRR will have a double LP by the end of the summer and [two-piece doomy noise metal band] Och will also release a 12 inch. Grey Wulf is currently working on three releases. Pretty much all i can say for now.