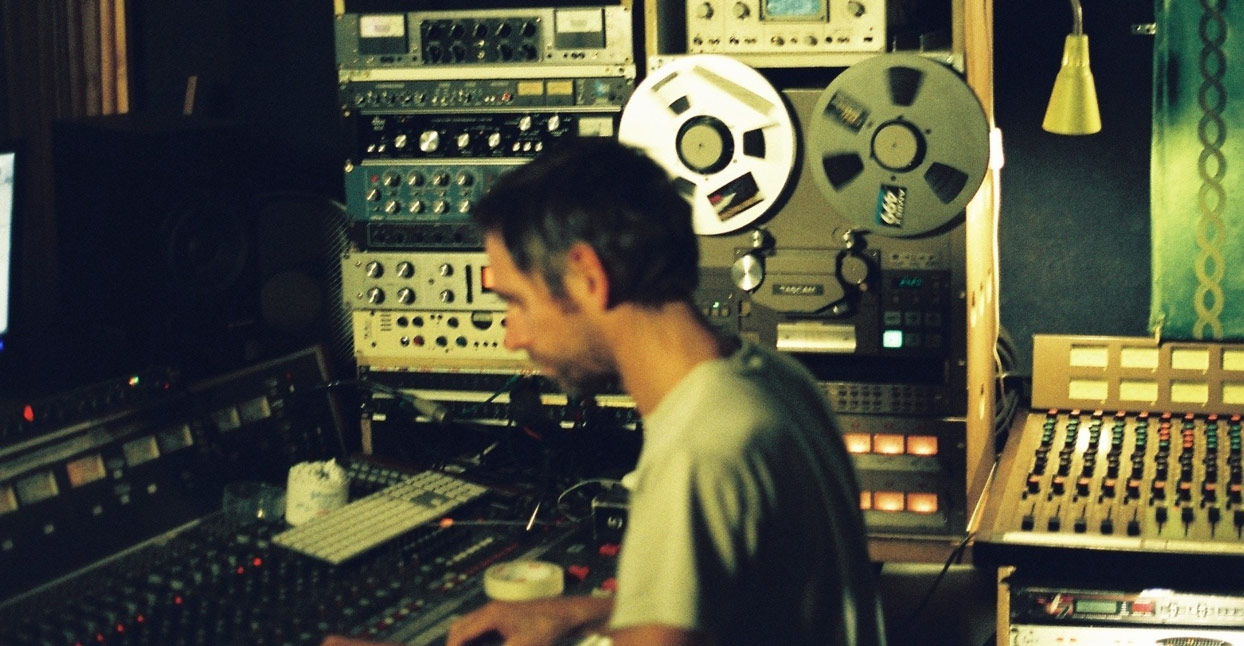 From the legendary FAME in Alabama, birthplace of the Muscle Shoals Sound in the 1960s, to Lee Perry’s Black Ark dub lab in 1970s Kingston, and London’s post punk hub Cold Storage in the early 1980s, studios have played a key part in the history of contemporary music. The most important ones not only produce pivotal records with a distinct sound, they become incubators for the local music scene.

Back in 2006, that kind of studio emerged in Glasgow, outfitted with secondhand analog gear from eBay and a small grant from the Scottish Government. Despite its humble beginnings, the tiny Green Door Studio became a hotbed for the city’s eclectic DIY music. “I think the studio has been crucial to the Glasgow scene over the last 10 years, and it’s had a huge impact in lots of ways,” says Keith McIvor—aka JD Twitch—one-half of local music heroes Optimo.

Green Door arrived as Glasgow entered its most exciting creative period since the city’s Postcard Records emerged in the early 1980s. Over the last 10 years, the analog studio has become a free-thinking creative hub for many of the bands involved in the city’s diverse but connected scene—from the EBM disco of Golden Teacher and experimental pop of Happy Meals, to the industrial noise of Total Leatherette and the amphetamine-fueled rock of Amazing Snakeheads.

The story begins 11 years ago, when studio engineer Emily MacLaren returned home from two years at South Factory Studio recording for the famous ZE Records in France, where she released her own LP In The Red with her band Michael Dracula. “I’d had lots of experience before in different studios that I wasn’t happy with,” she says. “But when I was at ZE, it was a totally different experience. I worked with another first-time engineer and neither of us knew what we were doing. It ended up being a really good approach; we just trusted our ears and instincts. And that showed me there was another way of recording.”

Following her time at ZE, she started conceptualizing a plan for her own studio. “I wanted to set up a studio that was run by musicians for musicians, where people could come in and learn about recording and the language of music production. The idea was to demystify the whole process so they felt comfortable articulating what they wanted their recordings to sound like,” she says. “I also wanted to return to the older analog recording format, not just for the sound but to get musicians playing together live in a room rather than separating them and editing it all on a computer.”

With partner Stuart Evans—previously of alt-rock band Geneva—musician and sound engineer Jamie Grier, and Sam Smith—producer at Glasgow’s Chemikal Underground label and member of Casual Sex—MacLaren began to look for a suitable space.

She found it down a quaint little street called The Hidden Lane in Finnieston in the city’s West End. Trawling eBay for secondhand gear, the four began to collect enough equipment for the beginnings of an analog studio. “We got an old Allen & Heath mixing desk, an eight-track machine along with other bits and bobs that we already had—like a compressor, a spring reverb and space echo,” MacLaren recalls.

While Green Door would become known for its cutting edge indie and eclectic electronic music, its first significant release was a folk LP, recorded for Drag City Records. “Alasdair Roberts’s ‎Spoils LP really got the ball rolling for us because it got in the Wire [magazine]’s Top 50 of the year,” Smith says. “Doors started to open, we got more funding and then we started the courses where so many of the bands to come through the studio.”

After a couple of promo compilations—taking in everything from neo folk to doo wop—the group’s next important release was Sons & Daughters 2011 LP, Mirror Mirror. It was the first album produced at the studio by JD Twitch before he started using the studio as a way to source talent for his Optimo Music label. “They really know my musical tastes, and when they send me stuff they think I might like, they are usually spot on. So they are really a bit part of my A&R division,” Twitch says. “Anything that’s kind of weird jamming that you can’t categorize, we know that [Twitch] will like it and might put out,” MacLaren says. “So it’s a good match between us, and what comes out of the studio is usually good for the label.”

Amongst the groups to reach Twitch in this way was Whilst, a collective including Stuart Evans, that grew from a jam-based project at the studio. Their Everything There Was Was There EP from 2014 was typical of the free-thinking experimentation at the studio—with everything from free jazz to dubby post punk and krautrock thrown into the pot. “I think that’s a really important part of our ethos—to facilitate people who don’t want to toe the line and want to try different things,” Smith says. “And that’s what we’ve always supported—just helping musicians make great records.”

One of those musicians is Claudia Nova, who makes dark, atmospheric synth pop under the name Hausfrau. Her debut LP, Night Trades, was recorded and engineered at Green Door by MacLaren and Evans. “They are incredibly open to experimentation—their approach is like an Oblique Strategies deck (Brian Eno’s cards designed to help artists think laterally to break creative blocks). If something feels stuck, why not reverse it?” Nova says. “Play on the offbeat, try an unfamiliar instrument, or strip everything away.”

Also liberated by the anything-goes-attitude were Scottish Australian duo Murray Collier and Hannan Bouchemla Jones (aka Pussy Mothers). The collision of disco junk funk and early hip-hop heard on the The Number 1 EP was recorded at Green Door and released on Optimo Music in August last year. “I don’t think we would have come together as a group if it wasn’t for the studio and I think that’s the same for a lot of musicians in Glasgow,” Collier says. “Being at Green Door really opened up the whole recording process and made it more accessible. It really changed my view of what was possible.”

Like many of the artists to record at Green Door, Murray was introduced to the studio through their government-funded courses for NEETS (Not in Education Employment or Training), designed to demystify the recording process. “We wanted to give musicians a creative space where they could explore and find their own way without being pressured by time or money constraints,” Smith explains. “Quite often, there was no grand plan to form a band or make a record, things were just allowed to grow organically. Which is quite magical, because when you try and make these things happen, they quite often don’t.”

One of the early groups to emerge from the Green Door youth projects was Golden Teacher. “I actually did the very first NEET course that Green Door ran,” drummer Laurie Pitt says. “From then, I just kept on working with the studio doing session work and used to invite other musicians down when a new course started. It became a real word of mouth thing in Glasgow.”

Their 2013 EP, Bells From The Deep End, a collision of new beat, acid, no wave and disco, was a direct result of the liberating environment of Green Door. “Every song we did was coming out of improvisation and usually the finished recording was us making something up from scratch out of a really freeform jam,” Pitt says.

Also graduating from the studio’s youth initiatives was Lewis Cook and Suzanne Rodden who formed Happy Meals at a jam session out of one of the NEET courses. “It opened up a whole new world to me. Going into the Green Door if you came with an idea like let’s run the tape backwards, they’d be like, ‘Yeah, cool let’s try that’,” Cook says. “When I did the NEET course I didn’t know anything about recording music and as well as learning recording techniques,” adds Rodden. “The thing that was so great about Green Door was the encouragement and enthusiasm that comes from them.”

The youth projects are central to the success of the studio as an incubator for talent, unravelling the studio process and encouraging innovation. “I’d been to studios before and I felt like there was always this divide between the engineers and musicians,” Collier says. “But at Green Door it was the opposite. They were really open to what you felt like you could do and showed us that it wasn’t this big mystery.”

Given the diversity of bands that record at Green Door—from death metal groups to Ghanaian hip-hop artists—Nova (aka Hausfrau) makes a convincing claim that there’s something distinct about the studio’s sound. “When you listen to something recorded at Green Door, you don’t visualize it in a mundane studio setting,” she suggests. “They are very good at constructing an atmosphere unique to each piece of music.” This helps create what MacLaren calls simply a “chaotic, warm and dirty sound” on their many disparate recordings. “Even though all the artists on my label to have recorded there are quite different, there is something that ties them together because of the sound of the studio,” adds McIvor. “I guess the key things are that it is quite loose, free and also dubby—there is a lot of space to the music.”

The “Green Door sound” owes a lot to all the great analog equipment they have amassed over the years. “The techniques and the way you use the equipment are so important to the sound,” Cook says. “Actually being there on this big mixing desk or playing with a space echo or spring reverb—it’s like a real eureka moment. You start to hear why the records you have always loved sound the way they do. There is nothing like working in this very organic and fluid way. There is an element of magic there where you allow things to flow. There is also a philosophy there that extends beyond the sonic aesthetic. And I think that’s what unites so many people—musicians and listeners alike.”