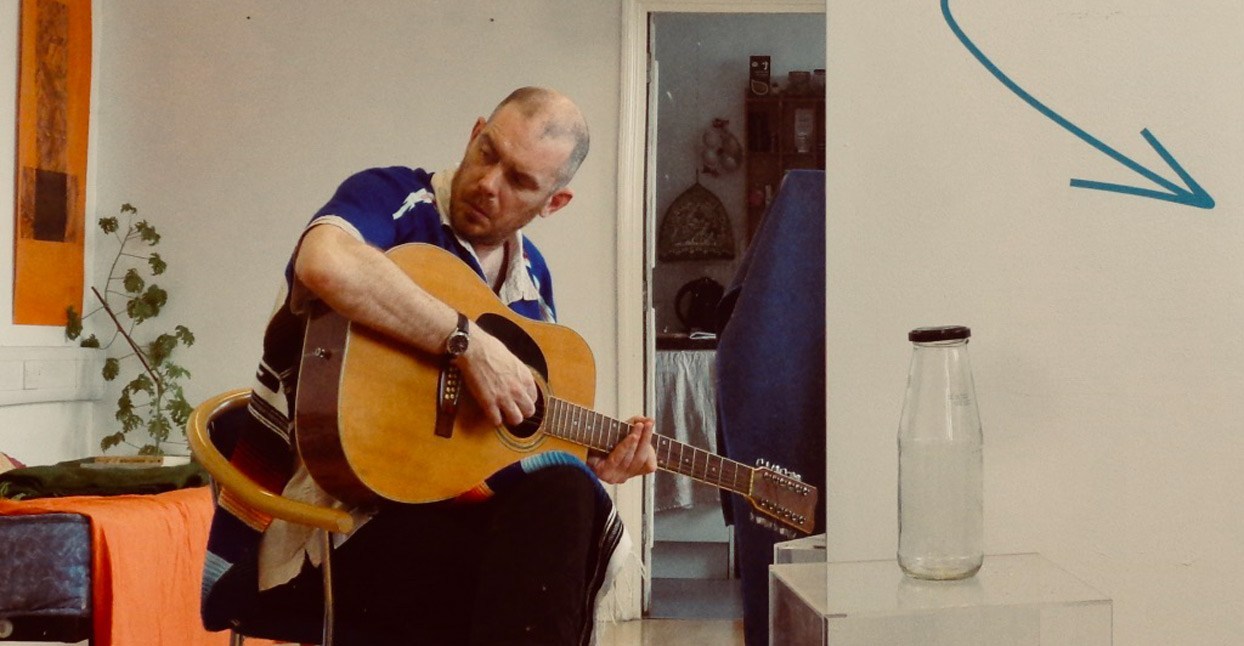 In Graham Lambkin’s world, the sound of water is like a melody that everybody knows by heart. “It’s such a relatable sound,” he says during our email conversation, when asked why so much of his deeply experimental tape collage work over the last two decades has so prominently featured the sound of water running, splashing, and dripping. “It’s variable, textural, dynamic, atmospheric, and it can hold otherwise disparate sounds together and give them a sense of cohesion,” he says. “However abstract the work is, water provides a familiar grounding to anchor the listener’s attention.” When you consider Lambkin’s penchant for stitching together cryptic, unrecognizable, even frightening sonic environments out of completely ordinary noises (crunching pinecones, swaying wind chimes, a person snoring), it makes sense why the soothing tone of water would strike a welcoming chord.

It’s surprising that Lambkin feels the need to placate his listeners at all. From his time as a member of beloved ‘90s U.K. underground trio The Shadow Ring up through his groundbreaking solo work in the ‘00s, Lambkin’s confrontational music has consistently put forward an intriguing challenge for his audience, tackling the concepts of electroacoustic composition from a willfully primitive, homegrown perspective. While The Shadow Ring’s output revolved around atonal instrumentation accompanied by surreal, deadpan monologues, the albums Lambkin has released under his own name take their deconstruction even further, presenting disorienting, insular compositions pieced together from scant traces of everyday field recordings. “It dawned on me from quite a young age that making artwork was an essential survival mechanism for dealing with the drudgery and boredom of everyday life,” he says. “A lot of the early Shadow Ring things were about finding corridors of escapism—ways to turn the mundanity of life in a small coastal town into something more surreal, otherworldly, and bearable.”

Much of Lambkin’s recorded output deals in, as he puts it, “banal domestic situations that involve some kind of musical element, usually with an autobiographical consideration at the core.” Yet his way of editing together field recordings, prerecorded music, and his own constructed sounds unlocks textures and emotions hidden deep beneath the surface. 2011’s Amateur Doubles, for instance, was created from recordings Lambkin made while driving through the countryside with his children in a Honda Civic. “I liked the idea of having one set of predetermined musical values going up against the unpredictable passenger dramas and the changeable sounds of the landscape we were passing through, and then seeing how these three worlds spoke to each other,” he says of his conceptual approach to recording the album. Listening to Amateur Doubles, as the sounds of French New Age CDs commingle with the hum of Lambkin’s engine and the muffled exchanges between the children in the background, it feels like discovering a rift where the ordinary and the transcendent seem to meet on the same unsettled plane.

Though Lambkin’s process of crafting mesmerizing tonal portraits out of the mundane may seem fairly innocent, his work has generated much debate over his free incorporation of other artists’ music. Salmon Run, his critically acclaimed 2007 album, draws much of its thematic material from old Russian classical recordings, some of which are left fully intact as Lambkin surrounds them with the beeps, creaks, and sighs of his house. “I completely acknowledge that I hold no claim over the authorship of other artists’ work, and I would like to think that how the pieces are used is not exploitative, but rather done in an effort to preserve the original artistry, and also to extend it in new, unforeseen directions,” he says. Certainly one of the more fascinating qualities of Lambkin’s work is the way that it not only creates music out of simple, minute sounds, but music out of listening itself. “I liken it to the way music is encountered in everyday life, where snatches of songs are heard in passing vehicles, or are faintly audible in a noisy bar, and to treat them the same way—as just one ingredient in a much more active, complex sonic picture.”

Previously, Lambkin had issued his albums under his own Kye label, or through co-conspirators like Erstwhile Records (who have also released his collaborations with fellow experimentalists such as Michael Pisaro, Jason Lescalleet, and Keith Rowe). But in 2017, he made the decision to bring Kye to an end due to the increasingly difficult process of manufacturing physical media in the age of vinyl overproduction. Earlier this year however, Lambkin made all of his releases available on Bandcamp for the first time, providing a new avenue for listeners to discover his unnerving portals into our rich world of sound.

Although the experience of listening to Lambkin can be highly uncanny, he claims that it’s never been his intention to make overtly dark music. “Perhaps because my work is usually quite unvarnished and raw, it comes over as being too ‘close’ or ‘real,’” he says. That’s what’s ultimately so striking about his art: it tugs at the curtain of the supernatural, bringing common timbres to the forefront only to scatter them about before us, leaving us suspended in a void of the strangely familiar. “Offering very personalized commonplace sounds in close proximity, but denying the listener a visual counterpart… it’s akin to hearing sounds in the dark.”