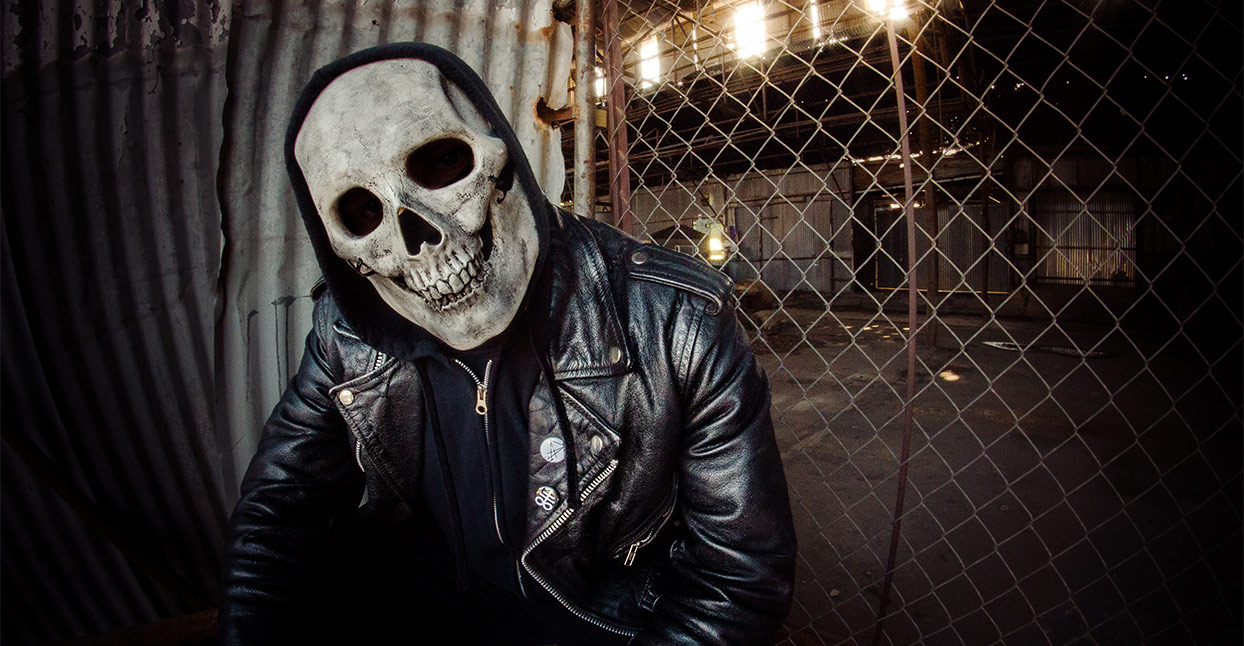 Like many other synthwave artists, GosT’s songs are cut from the same blood-soaked cloth as horror greats like John Carpenter. His songs don’t just set the mood for movies, though—they’re the feature presentation, equal parts chaos and pure theatre.

A lot of that stems from GosT’s KISS obsession as a kid. “They had a huge impact on me performance-wise,” he recalls. “They were so over-the-top on stage and in myth.”

The same goes for GosT itself, a project shrouded in mystery, helmed by a producer wreathed in smoke and donning a skeleton mask. The whole thing seems larger-than-life—especially in a scene that is typically laid-back and reserved.

“Only a few of us have taken synthwave towards the Justice end of the spectrum,” the producer says when we point out the similarities between his new album, Non Paradisi, and dance music. “It’s been natural, but we’re a small group of outcasts.”

Chalk that intensity up to GosT’s past as a member of several metal/hardcore bands—the identities of which he’d rather keep secret. But it’s not that simple—songs like “Aggrandizement” are both dynamic and deep. Our conversation, unsurprisingly, is the same.

What’s the earliest memory you have of music?

Seeing the cover of Van Halen’s 1984. I was super young, and the artwork was shocking to me at the time. Seeing and hearing that album at such a young age had a huge impact on where my future musical tastes would lie.

How did you end up making music yourself?

My father was really close with some fairly popular country artists when I was younger, so I was frequently backstage at shows. Seeing that part of the business—meeting the artists and watching backstage collaborations—was integral in forming me into an artist. I didn’t realize how much it meant to me at the time, but following my father’s death, these memories came rushing back to remind me of the influence this period had on me.

Without giving too much away, what were you doing before GosT? You played in some metal bands right?

Yes, I played in metal or hardcore bands prior to being in GosT. My main focus was usually in the doom end of the spectrum. Sometimes I miss playing instruments in a band, but I do not miss the drama that comes along with that…

What was the first electronic record or artist you obsessed over, and why?

The song “Pump Up the Volume,” from the movie of the same name. I had a babysitter one summer who was obsessed with it, and anytime we were in her car, she played that cassette. She eventually gave the cassette to me, which was a single that only played the song on repeat, over and over.

Did you start making your own electronic music soon after that?

I started trying to make electronic music around 1998 or so, but I was absolutely terrible. Electronic music has always been off and on for me until GosT.

How did your earliest tracks sound compared to what GosT is now?

My earlier tracks were still dark and horror movie-influenced, but as time has gone by, things have gotten heavier and darker slowly. It’s all felt like a very natural progression/regression back to my metal roots.

Your record Behemoth was extremely successful—the vinyl pressings sold out almost immediately. Why do you think that is? What is it about synthwave records like yours that’s resonating with a serious underground audience these days?

I actually cannot say why things have been going so well, other than I am doing things a bit differently than other electronic acts today. I push my production hard, and it is loud and heavy, which is something that seems to be lacking in electronic music lately. Blood Music has definitely been integral in GosT’s success by making physical formats available and opening me up to a wider audience.

What are a few major musical influences on GosT that would surprise people?

I am hopeless for ’80s pop music. Everything from super pop, like early Madonna and Michael Jackson, to stuff like The Cure, Depeche Mode, The Smiths, Yazoo etc.

What about non-musical influences, like films or books, that reach outside the horror realm?

The Goonies is my favorite movie of all-time, hands down. I have like five Goonies tattoos. I will watch Goonies to this day; it just doesn’t get old for me. Ender’s Game by Orson Scott Card was a huge influence on me, and was the first actual novel that made me realize that reading is something I like to do.

What’s the first horror film that kept you up at night?

Definitely A Nightmare On Elm Street. I was really young when that movie came out, and it was the first horror film I had ever seen. My brother had a huge birthday party where he and his friends stayed up late to watch the movie. I was supposed to be in bed, but I snuck into our den and watched the whole movie. Gave me nightmares for weeks, but I never regretted watching it.

Can you remember the first time a horror film’s music and imagery melded together perfectly for you?

The first time I saw Halloween, that’s the first movie I can remember where this clicked for me. Every track and its placement in that film work perfectly together. Nice job John [Carpenter]; thank you for that!

Everyone loves John Carpenter. Tell us about another film composer you love and why.

Lucio Fulci is the man. The synth scores in his films are so heavy, dark, and minimal—a perfect example of how a simple score can have a really big impact.

If you could re-score any horror film from the past 30 years, what would it be and why?

Good question…. Really hard to say, because every horror film I love has an equally amazing score. I guess if I was forced to re-score a favorite horror film it would be Friday the 13th Part III. One of my favorite horror films, but the score definitely leaves something to be desired. In a way though, the score being so bleak makes the movie even creepier to me.

Is the Satanic imagery you use in GosT meant to be tongue-in-cheek or, like many horror movies, is it a subversive commentary on the overtly religious society we’ve all been brought up in?

I personally am not religious in the slightest, but GosT definitely believes in God and the devil, heaven and hell. As a character, I am able to immerse myself in that belief, which can be very intoxicating to me creatively. It’s a strange paradox for me, because I enjoy letting myself employ those beliefs, but can and do instantly leave the character behind when I take the mask off.

Were you brought up in a religious family?

I am from a place people call ‘the buckle of the Bible belt.’ So, yeah, I’m from a religious town. My family wasn’t too religious, but when I was young, my mom took me and my younger sister to church.

Did you find yourself rejecting it immediately? Why?

I tried, when I was younger, to believe in God, but it always felt forced and fake. People’s commitment to the invisible always irked me horribly, and still does. Very much so.

Can you pick a couple key tracks from Non Paradisi to discuss in detail?

The opening track, “Commencement,” is very brass-heavy. Like, actual horns, not synthesized brass. It is a call to arms from Satan to the other rebel angels to rise up against the unjust and conceited god. It is the beginning of the fall from grace for Lucifer.

One of the vocal tracks, “Aggrandizement,” has a bit of a strange time signature, and every vocalist I pitched the song to rejected it because of that. I asked my wife to sing on the track, and she killed it. She is going by Bitchcraft, a nod to Type O Negative and Peter Steele. This was her first song to sing or write lyrics for, but she did a great job. Working on this track pushed us to start working on Bitchcraft as a separate project. Be on the lookout for Bitchcraft’s first single, coming later this year.

One of the main influences on your new album is Paradise Lost. Can you remember the first time you read it and how it made you feel?

I actually started reading the poem as I was writing the new record. The timing was just perfect, and I can’t even remember what made me start reading the poem in the first place. The story is perfect for GosT to tell from a musical standpoint.

Why center an entire album around that story?

Because GosT is Baalberith, a prince of hell who experienced the fall firsthand. He has been there since the revolt in heaven and the rise from hell.

What’s one of your favorite passages from Paradise Lost?

“The mind is its own place, and in itself / Can make a Heav’n of Hell, a Hell of Heav’n.” I like this quote because it is true to actual life, and to the way we are as human beings. We tend to focus on the negative in almost every situation, making life much more difficult on ourselves than we have to.

Did you find yourself appreciating Paradise Lost on a deeper level as you read it closely while working on this record?

Yes. The poem speaks to me as the world is today: tyrannical powers control the underdogs and the poor worldwide, and we are always on the edge of revolt against our masters.

What can we expect from you after this? Are you doing a special live set that reflects the album and its story in a special way?

You can expect many more live performances that will, yes, reflect the new album. I do not want to give too much away, but I am working on a lot of new things that will be revealed in the near future.