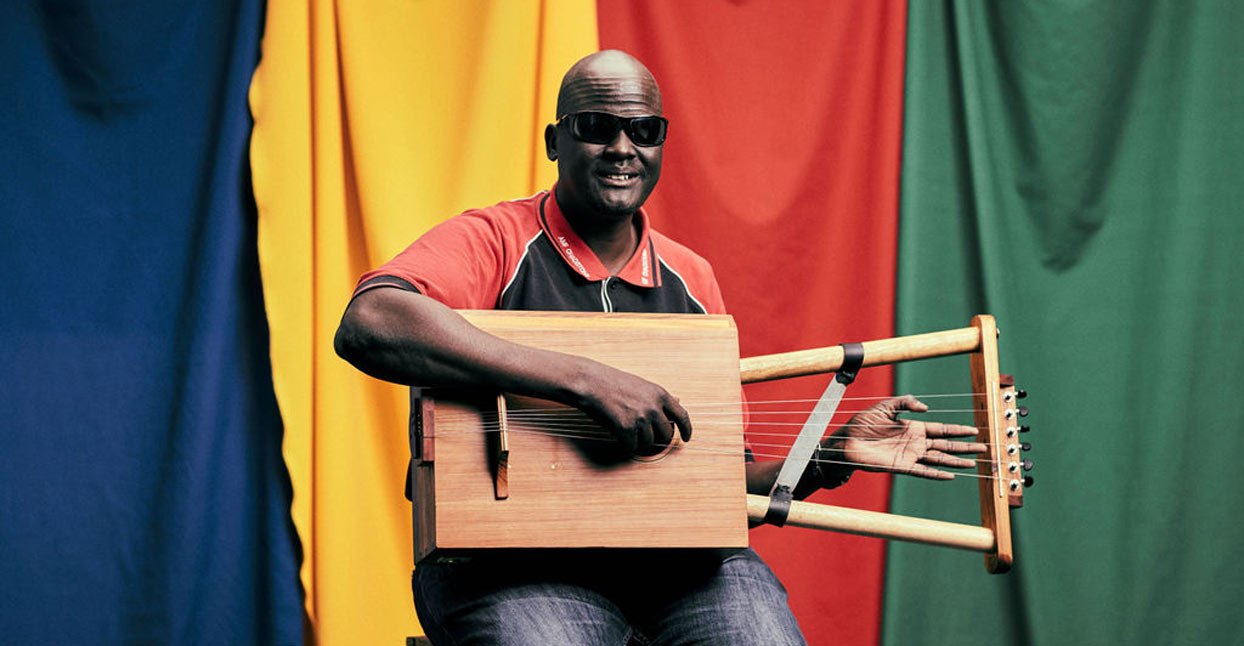 In person, Gordon Koang cuts a striking figure. He’s over six-feet tall, and his forehead bears six rows of scars marking the transition from childhood to adulthood that are traditional for men of the Neur tribe of South Sudan. Blind since birth, his eyes are hidden behind chunky, wraparound sunglasses. His smile is luminous, and he’s rarely without it.

Since 2014, Koang has lived in Australia as an asylum seeker, but his music is intimately tied to the people and culture of his home country. He plays the thom—a six-stringed, East African instrument that you can strum like a guitar and finger like a harp. He started playing the thom in 1988 when he was nine years old, learning traditional songs for his church. It was another decade before he began composing his own. He took his music to the streets, and from there, to local radio and TV.

Across Africa, Koang became known as the “king of music.” His songs were played at weddings and in the streets to jubilant crowds. He was a TV star. Official and unofficial videos of his songs have amassed millions of views on YouTube. He’s toured the U.S. and most of Canada. He was routinely greeted at airports by adoring fans. By 2010, Koang had released 10 albums.

Flanking Koang through the tours and the stardom—and still by his side today—is cousin Paul Biel. Biel plays the drum in Koang’s Australian band alongside Stefan Blair and Liam Parsons of Good Morning, James Mannix of Peak Twins, and Paul Ceraso of Lizard Queen. Biel and Koang have similar stories of exodus from South Sudan. Their relationship mirrors the music they play—in the same way that the drum always accompanies the thom, Koang and Biel have an unbreakable kinship.

But civil war and violence continue to plague their homeland, where conflict between two ethnic groups, the Nuer and the Dinka, have left the world’s youngest country more often in war than peace since its independence in 2011. Many of Koang’s songs detail this genocide and criticize the war, while others like “HIV/AIDS” present as pointed social commentary. Yet Koang maintains he’s not political.

“I just tell people to love each other,” he says. “If you are a community, you can love another community. One hand cannot clap, but two hands can clap together. You have to get people to love themselves,” he says.

Though perpetually buoyant, it’s hard to imagine Koang hasn’t felt hopeless at times. His wife and six children remain in a Ugandan refugee camp, where they’ve been since 2014 while Koang pursues permanent residency in Australia.

“It’s very hard when I am alone. I play my thom when I’m sad. But when I’m with other people and I hear their voices, it makes me happy,” he says.

Indeed, optimism is the lifeblood of Koang’s music. Though the world around him has been violent, his desire for universal love and hope has never faltered. The lyrics of “Stand Up (Clap Your Hands)” reflect this: “Stand up and clap your hands, don’t keep quiet, move your body, come up here / On the stage with your partner you can dance now! / Show us your style, give us your attention / Listen while we’re gonna say, we love you audience!” In this song, bringing people together with music is joyous and pure—an open offering of kindness. “Asylum Seeker” draws on Koang’s personal experience as a way to comfort other asylum seekers awaiting processing. Calm instructions sit neatly between the track’s steadfast beat: “My dear asylum seeker / I know you’re waiting for your permanent protection visa / We know you’ve been waiting for a long time / Sometimes it has been hard / Our advice is / It won’t be long before you have it / You need to be patient.” And despite the fact that the Australian government has received international condemnation for their treatment of asylum seekers, Koang’s songs are never bitter or angry.

In mid ‘18, Koang met Joe Alexander, who runs Bedroom Suck Records, a Brisbane-based label whose roster includes Blank Realm, Boomgates, and Scott & Charlene’s Wedding. At the time, Alexander had been wondering: “How could I use my time, energy, and resources for something community and socially-oriented? How can we use music in a broader sense?”

He was given a list of phone numbers by a friend who worked at Multicultural Arts Victoria, one of Australia’s most important bodies for discovering and promoting cultural diversity in the arts. “Gordon’s name was at the top of that list,” says Alexander. The meeting between Alexander and Koang was the start of Music in Exile, Alexander’s new label dedicated to supporting culturally and linguistically diverse artists in Australia. But like Koang, Alexander shies away from being tagged as political.

“I haven’t wrapped my head around this, whether the label is a political thing,” he says. “It’s definitely a social thing. The idea is that if there are culturally diverse artists out there that don’t have access to resources, Music in Exile can support them.”

And the roster is growing fast, with artists representing China, Eritrea, Rwanda, Senegal, Gambia, Mali, and Cuba—the latter countries are a result of the label’s most recent signing, Ausecuma Beats. Alexander has also secured remixes of Koang’s tracks by three Melbourne electronic artists, set for release from November.

“I love the idea and taking Gordon’s music to a nightclub or festival, of exposing him to new crowds and putting it in new contexts,” says Alexander. “That’s one of the ideas behind Music in Exile. How does someone like Gordon, who’s making music with traditional instrumentation and singing in different languages—how do you make that relevant to contemporary audiences?”

And Koang’s music is succeeding at reaching new audiences. He’s playing shows and festivals across the country, and recently showcased at Australia’s premier music conference Bigsound, where he won the Levi’s Music Prize worth $30,000 AUD. Unable to be separated from Koang’s music is his optimism, pervading and delighting new and bigger audiences wherever his music goes. And in August, Koang’s permanent residency visa was granted. His wife and children (as well as Biel’s) will soon leave Uganda to join him in his new home.

Koang’s next album is due for release in early 2020. Like his singles, the album features songs in a combination of English, Arabic, and Neur. Fittingly, he’s naming it Unity, and the 12-tracks are idiosyncratically joyous—true Koang style.