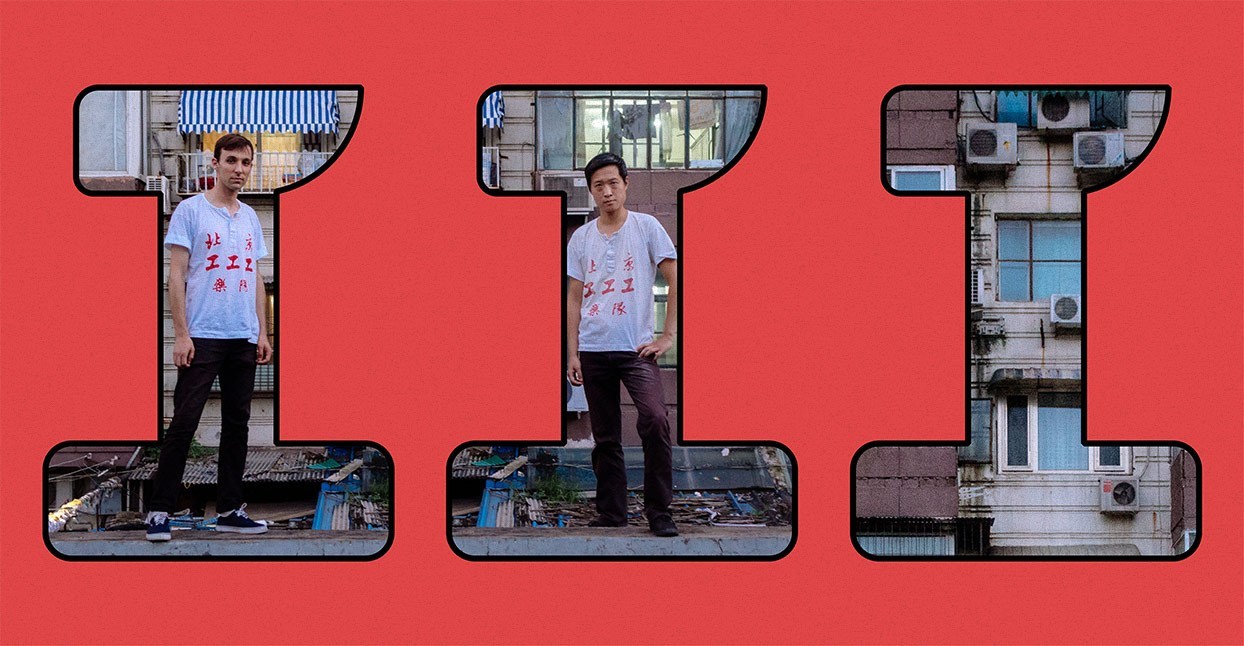 Gong Gong Gong’s first show came at the end of an era for experimental rock in Beijing, and forecast the first stirrings of a new one. Though neither bassist Joshua Frank nor guitarist/vocalist Tom Ng hail from the Chinese capital, it’s where they met, and where the duo’s peripatetic, placeless sound first took root.

Frank, the child of Canadian foreign service workers, spent formative years in Beijing in the ‘90s, moving back in 2006, and making discordant, minimalistic psych-boogie with his brother Simon under the name Hot & Cold. Ng moved to Beijing from his native Hong Kong in 2009 with his band The Offset: Spectacles, a stripped-down, drummer-less, since-disbanded Canto-psych trio that fit in more with the no wave experimentation of the Zoomin’ Night series at Beijing venue D-22 than anything to be found at home. The two bands became close, co-founding the short-lived but seminal Rose Mansion Analog cassette label to meticulously document a particularly potent moment in underground Beijing rock.

Gong Gong Gong took shape after the Spectacles disbanded and Hot & Cold went into hibernation, playing their first show in summer 2015 on the closing night of XP, D-22’s successor. Without a home base, the loose cohort of artists that had orbited around Zoomin’ Night gravitated to smaller, more underground niches within the city, and Gong Gong Gong took advantage of this blank slate to craft a singular, site-specific sound.

“It was a time when most of the venues in Beijing had shut down and not much was going on,” Ng recalls of the band’s early gigs. Their second show took place at a public underpass; their third, at a small record shop. They ultimately found a home at Fruityspace, a small DIY venue opened by scene stalwart Zhai Ruixin in early 2016. Fruityspace “really helped us to release our creative energy,” says Ng. “[They] let us play loud, sell our merch, even organize shows at unusual times. That contributed to Gong Gong Gong’s tendency of wanting to play and react to the performance space more than a usual band would.” What has evolved into the band’s signature Bo Diddley-meets-Tinariwen-meets-Rhys Chatham sound was attuned to the spare, intimate spaces they gravitated to early on, with special attention paid to how their minimal instrumentation could fill a room.

Gong Gong Gong’s debut, Phantom Rhythm, is a scrupulous effort to transpose this small-room dynamic onto a rich, full-sounding LP. As the title suggests, percussion on Phantom Rhythm comes as the “illusion of sounds that aren’t actually there,” says Frank. “[By] arranging the bass and guitar to make sure that there is a full sonic spectrum being played, it can sound like there’s percussion filling the gaps between our parts,” he says.

Rhythmic and melodic depth achieved through lockstep austerity—a connection the band calls “almost telepathic”—belies the complex challenge of matching guitar and bass melodies to Ng’s incantatory vocal delivery in Cantonese, a language with nine tones. Ng’s lyrics are thus carefully chosen for their tonal as well as textual qualities, adding an edge of dissonance that’s far removed from the careful synchronization of the instrumentation. Some of the album’s standouts—the chunky, downbeat “Ride Your Horse,” the roiling closer “Sound of Love”—are embellished with lyrics that Ng says are drawn from the same well as ‘80s Cantopop icon Richard Lam: “usually absurd, with a hidden vulgar story.”

Though these lyrics fly over the heads of most audiences (Mandarin is the primary language in mainland China), the band has built a steadfast following, on their home turf as well as abroad. Touring out from their home base at Fruityspace, they recently sold out the much larger Shanghai venue Yuyintang, as well as their first headlining gig in New York. Paradoxically, this “Beijing band” of outsiders may be ideal ambassadors of Chinese underground culture in an increasingly fractured and frictional global landscape.

“I think that this is a moment in pop culture where there’s a much greater interest in cross-cultural work, and things from Asia in particular,” says Frank, who has lived in Delhi, Montreal, and New York in his adult life but has spent at least a few months out of every year in Beijing since he was a teenager. “It was always my hope that music being made in China could reach people in the rest of the world, and that there could be parallel scenes interacting with each other, rather than a U.S. or European label releasing music from China as a novelty or oddity.”

Given how China is generally perceived as a cultural monolith by the West, Gong Gong Gong’s burgeoning career and global reach isn’t just a success story, but a statement, a show of solidarity. “It’s really validating to draw connections between Beijing and the rest of the world,” Frank muses about the band’s greater mission. “The fact that Gong Gong Gong seems to connect people from Brooklyn to L.A., Copenhagen to Beijing, Tokyo and Taipei is one of the most rewarding things about what we’re doing.”