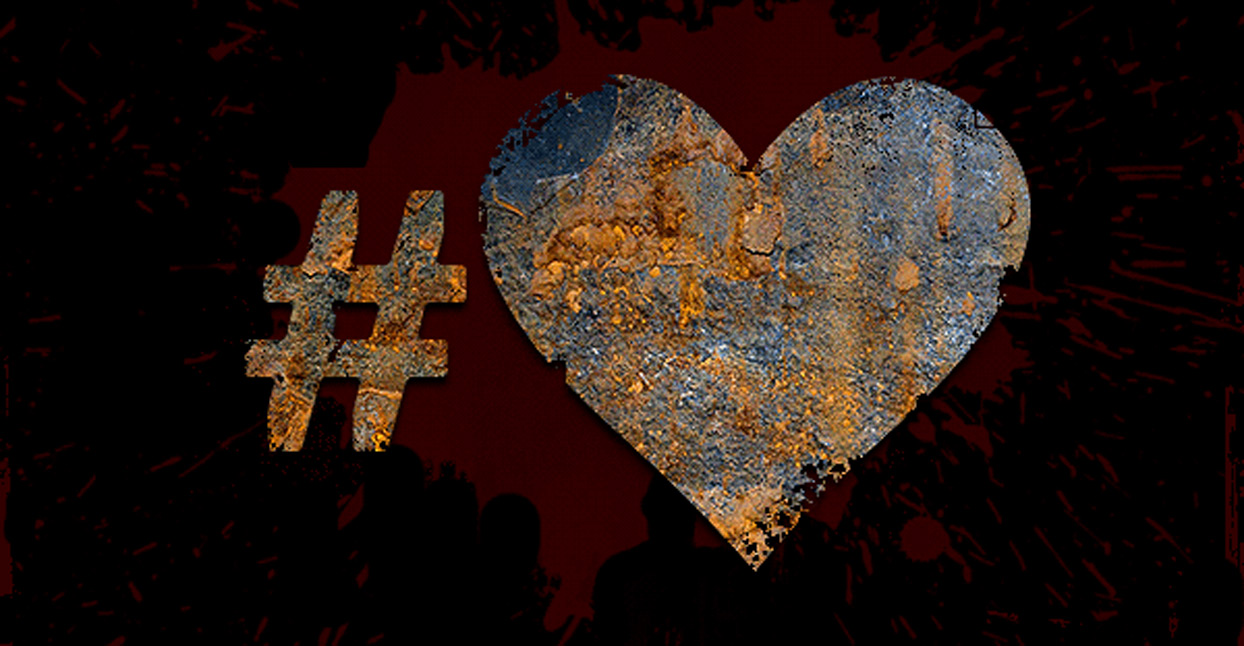 “Every time you open Twitter, there’s tragedy, there’s heartbreak, there’s horror. This is the polar opposite.” —Seth Werkheiser

Last week, we saw something unusual and special happen in the world of Bandcamp: a group of fans started the Twitter hashtag #MetalBandcampGiftClub as a way to gift someone a record from their Bandcamp Wishlist. Unlike so many internet memes, this one didn’t die on the vine. It kept growing, attracting more and more enthusiastic followers excited by the idea of sharing records they love with other fans on Bandcamp. Just one week later, there’s a website for the group and enthusiasm for the project continues undimmed. We spoke with the three people behind #MetalBandcampGiftClub—Jeremiah Nelson, Zachary Goldsmith, and Seth Werkheiser—to find out how the hashtag started, and why they think it’s been such a success.

BC: To start, I’d love to know a little bit about each of you, and how you got into music.

Seth: I grew up in a musical family. My mom played bass in a band, my dad played guitar in a country rock band, and my uncle pressed a record in 1980 with his band. I, of course, then got into music. I started playing in bands in high school, but as the years went on, it was like, “I’m not gonna be a rock star, maybe I’ll just write about it.” I was writing about bands I kind of knew—small, under-the-radar bands. That’s how it started—I just wanted to see these bands, musicians, and friends sell albums. And that’s carried through until today.

Zach: One of my brothers was just a total loser. [laughs] When I was younger, he got into Vampires the Masquerade, and had a Sisters of Mercy poster on his wall. And I was obsessed—I wanted a cool poster. So I went to the village fair in my little dairy-farm town, and somewhere between the tractor pull and the racist “South Will Rise Again” booth, I played one of those gun games where you shoot out the target. I won a Metallica Ride the Lightning poster. My older brothers then gave me a copy of the album. And then I got a Helmet mixtape in sixth grade, and that was it.

Jeremiah: I got my start pretty young, too. My parents are from a small town in Western New York, and I grew up listening to hair metal—Bon Jovi, Quiet Riot, Def Leppard. That’s what my dad was into, and that was always what was on the radio. When I was a teenager I got really into punk. At some point along the way, I discovered Living Sacrifice’s Reborn, and that was my first foot away from Crass and Squad Five-O. I just latched on to that record.

BC: And how did you meet one another?

Seth: We all came together through Skulltoaster, my metal trivia site. I started Skulltoaster because I didn’t want to write any more hot-button, “Dave Mustaine Said What?!?” pieces. I was tired of that. So I did Skulltoaster, and instead of tweeting “You Won’t Believe What Dave Mustaine Said!” it’s “Here’s a Trivia Question.” That attracted this really chill group of people. It didn’t become this cesspool of comments like, “You’re stupid, that band is dumb.” I didn’t know Jeremiah before I did that; he just randomly started following me on Twitter. We talked a whole bunch and, before you know it, we were pals. Zach is another guy I just met from doing metal trivia on Twitter.

Zach: Skulltoaster is the coolest thing in the world. It’s metal trivia, and if you follow it long enough, Seth will just send you a postcard in the mail. It’s so cool to make that connection.

BC: So how, exactly, did #MetalBandcampGiftClub get started?

Jeremiah: I guess it was a week ago now. I’m going through some stuff in my personal life right now—some real heavy life stuff—and I was having a rough night. I just found myself surfing around on the internet and ended up on Bandcamp, looking for something to listen to. I kind of had a thought, “I’m having a down night, but I bet I can make some other people smile.” It was really a little bit of a selfish thing. I knew that it would make me feel better if I could make somebody else feel good. So I started looking around, gifted eight or nine albums to people, and sent one to Zach—The Touch of Ithuriel’s Spear by Beast of the Apocalypse. I went to bed at that point and that was that. Zach woke up the next morning, saw that I had sent him a gift and noticed there were a couple people on Twitter saying, “Thanks for the album that you sent….”

Zach: Jeremiah sent the album the day after my wedding anniversary, so I thought for a second that I’d drunkenly told him a lot about my life, and he was just being a super-nice guy. So I took a little screenshot and put it on Twitter. The whole idea of Twitter—when you look at your timeline, it’s just miserable. Everyone just hates everything. Any band announces something cool, no matter how small they are, people just shit all over it. So I decided that in 2016, I was gonna be a lot more positive. So I put it up there, but kept being a sarcastic asshole by using a super-long hashtag: MetalBandcampGiftClub. I think in the beginning I even put an umlaut over the u. I put my Bandcamp profile up and said, “Follow me [on Bandcamp], and if you follow me, I’ll follow you, and I’ll retweet that. Then other people will follow you, and we’ll start gifting albums.” And then it was just an avalanche for 48–72 hours. Just insanity.

Seth: A couple of days later I was talking to a friend and I said, “Why don’t we buy the domain name and make it a website?”

BC: What was the most exciting part for you as the hashtag started taking off?

Jeremiah: Seeing other people tweet about being excited to get an album from a relative stranger. There was already a small metal community on Twitter, and I kept seeing everybody pull together around this idea of making somebody else smile. It was just seeing everybody feel good about doing something cool. There’s the stigma with metal that everything needs to be dark and brooding and angry all the time, but even before this happened, we’d built a community of good people who try to help each other. So to see that cement around doing something cool for each other has just been huge. For me personally, it’s been a light in the darkness—a candle that was lit when things were pretty dark.

Zach: It selfishly helped me pursue my resolution of being a nicer person. I haven’t seen that many people responding to negativity on Twitter, because the positive aspect has overtaken it. Whatever Dave Mustaine is eating for breakfast is no longer trending. Some of our friends who are in music—struggling bands who can’t compete with the huge labels—to see their albums pop up to the top-seller list is so cool. My favorite entire story is that 48 hours in, Handshake Inc., a really small label, tweeted out about one of their bands: “Did anything happen to a member of Couch Slut in the last 48 hours?” They legitimately thought that, because of the spike in sales, a member of the band had died. That’s so reflective of the state of music: that somebody has to die for something good to happen. There’s a band called Slaves BC; they tweeted out that thanks to #MetalBandcampGiftClub, they were able to order new T-shirt designs for their upcoming support tour. It’s really cool to see it move beyond “Hey I’m gonna do a nice thing” to “We’ve moved 250–300 albums in five days.” It’s making an impact on these bands and the art that they want to create, and giving them an opportunity that they didn’t have.

Seth: This band from the UK said, “We were able to have practice this week, because we sold a couple more albums.” And it’s a couple more—it’s not thousands—but that’s gas or tolls or guitar strings. For a lot of these bands, that’s huge. When I was playing shows, gas was $1.20 a gallon, and that was considered expensive. I don’t know how bands do it now. When all of those prices keep going up, but the value of music is, “Buy a track for 99 cents” or, “Hey, you don’t even need to pay for it, you can stream it for free.” What is that? Being on the musician’s side, understanding the struggle—I get it. The dinner table isn’t that big, and everyone’s trying to get a place to sit. But in this super-niche Bandcamp wishlist group, to see these albums selling is amazing. The bands see it, the labels see it, the person who designed the album cover might see it—it just keeps swirling.

BC: Why do you think it resonated so deeply with people?

Seth: Every time you open Twitter, there’s tragedy, there’s heartbreak, there’s horror. And in the metal community, if you’re not talking about that, you’re talking about how this band is stupid or that label should go up in flames. It’s so toxic. This is the polar opposite. This is tangible. A lot of the people who are participating are just nice people, and they’ve come together to be like, “Hey, I like you on Twitter. You’re cool, we have nice conversations, here’s an album that I found that you’ll like.”

Jeremiah: I think generally people are good, and they want to do good things for other people. With so much crazy shit going on in the world—terrorist attacks happening, rock gods dying, cancer hitting close to home—if there’s a spark, people are drawn to that. The bass player from Couch Slut’s birthday was yesterday, so we piled on his wishlist and bought him a bunch of records. He tweeted something like, “I haven’t felt special in a really long time, but I do right now.” And it breaks my heart. People are struggling. And I can’t pay your bills, I can’t fix your personal issues, I can’t heal your body if you’re sick. But I can put a smile on your face and make you feel special for an evening. And I think people rally around that, because it’s something good in a world that can be really crappy.