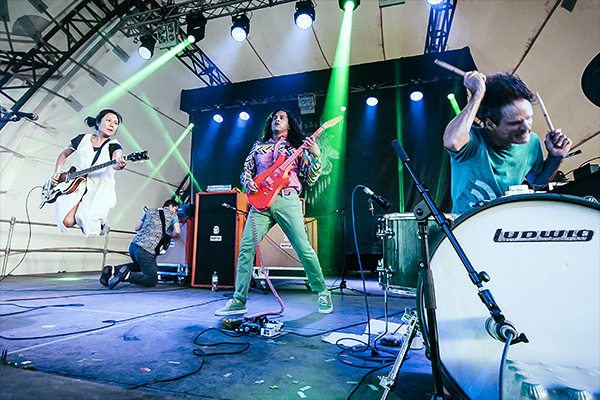 “Songs start changing when you play them every night. Like we become a Deerhoof cover band.” — Greg Saunier

Over the course of two decades, Deerhoof has churned out a dozen frenetic, restless records, each one full of playful exploration and a tendency to explode without warning. Greg Saunier’s manic drums crash into the rest of his band like a Mack truck on a kamikaze mission; Ed Rodriguez’ and John Dieterich’s shrieking guitars, often working in distorted and warped tandem, throttle your ear in alternating shades of menace and whimsy; and Satomi Matsuzaki’s nonsensical pixie-girl vocals provide the perfect foil for the rest of her bandmates’ violent thrashing. Listening to any Deerhoof album alone in your bedroom is likely to accelerate your pulse more than many a sweaty mosh pit, and it would be reasonable to wonder how a live album could ever up the ante. Yet Fever 121614 captures something that no studio album ever could: the inherent risk in nailing these complex songs live, and the unspoken communication that ties these four virtuosic musicians together, even as the songs threaten to fall apart around them. The album also includes a bonus video download of the entire live recording.

As the band tells it, a perfect storm of good fortune made their show at the tiny Tokyo club Fever ripe for something special. They had already been touring Japan for two weeks and had found their groove on stage. “You start to get ESP,” says drummer Greg Saunier. “Not always a good thing,” he deadpans. “You can predict what everyone‘s going to order for dinner.” For Matsuzaki, who is originally from Tokyo, it was a chance to play for so many old friends—an “ultimate fun party,” she says. Noriko Oishi, who directed the full-concert video that accompanies Fever, has collaborated with the group before, and her rapid-fire editing style perfectly complements Deerhoof’s loose and unpredictable performance style.

Over Fever’s dozen tracks, Deerhoof consistently break down what they have built in the studio, toy with it, modify it, and occasionally destroy it. “Songs start changing when you play them every night,” Saunier explains. “Like we become a Deerhoof cover band.” Saunier’s furious drumming is both the glue that holds the band together, and the element most likely to bring about its ruin. On stage, he often abandons the grooves and fills he laid down on Deerhoof’s studio albums; if you didn’t know better, you might think he was trying to sabotage his bandmates with the off-kilter rhythms he wrenches out of his minimalist kit. On “Dummy Discards a Heart” and “Twin Killers” in particular, he teeters on the edge of derailing the whole rollercoaster; instead of building up to an explosive chorus, as expected, he totally drops out and, for a moment, your breath catches in your throat.

Saunier isn’t the only one who throws caution to the wind on stage. Guitarists John Dieterich and Ed Rodriguez take liberties with their twisted tones, adding unexpected textures to their intertwining riffs and solos. On “Fresh Born,” from 2008’s Offend Maggie, they mangle the song’s tranquil intro into a delightfully warped and off-pitch mess of notes before Saunier leaps into the fray and delivers a satisfying, walloping payoff of crashing cymbals and snare. Many of these songs end in eruptions of guitar feedback and an echo-y racket; how they find each other in the chaos and launch into the next song without counting off merits an investigation by the Mythbusters team.

As the video reveals, these guys put their whole bodies into their playing. Dieterich, in particular, attacks his guitar with angular movements that perfectly mirror his jagged riffs. (On one occasion, I’ve seen him get so into a song that he fell off the back of a stage). And while his movements are frenzied, Satomi’s are playful. On “Come See the Duck,” from 2005’s Green Cosmos EP, Satomi gets up-close with the fans and has them shouting along; “We Do Parties” finds her dancing like a giddy cheerleader, soaking up the crowd’s energy. “Audience reactions excite me and motivate me to do different things like laughing, dancing and screaming,” she says. “I think generally audiences don’t realize they are watched. They think they are watching us…they are our fuel!”

Deerhoof has always been a band of thrill-seekers, and their new live album is no exception. Following in the footsteps of concert recordings like Talking Heads’ Stop Making Sense and Wilco’s Kicking Television, Fever 121614 captures a band that doesn’t need to stick to the script they’ve written for themselves. Daring, delightful and ever-unpredictable, Deerhoof has shown how far off their own leash they can run. “We’re making a new record now,” Saunier says, “and we keep saying, ‘Play it more like you played on Fever 121614!’”