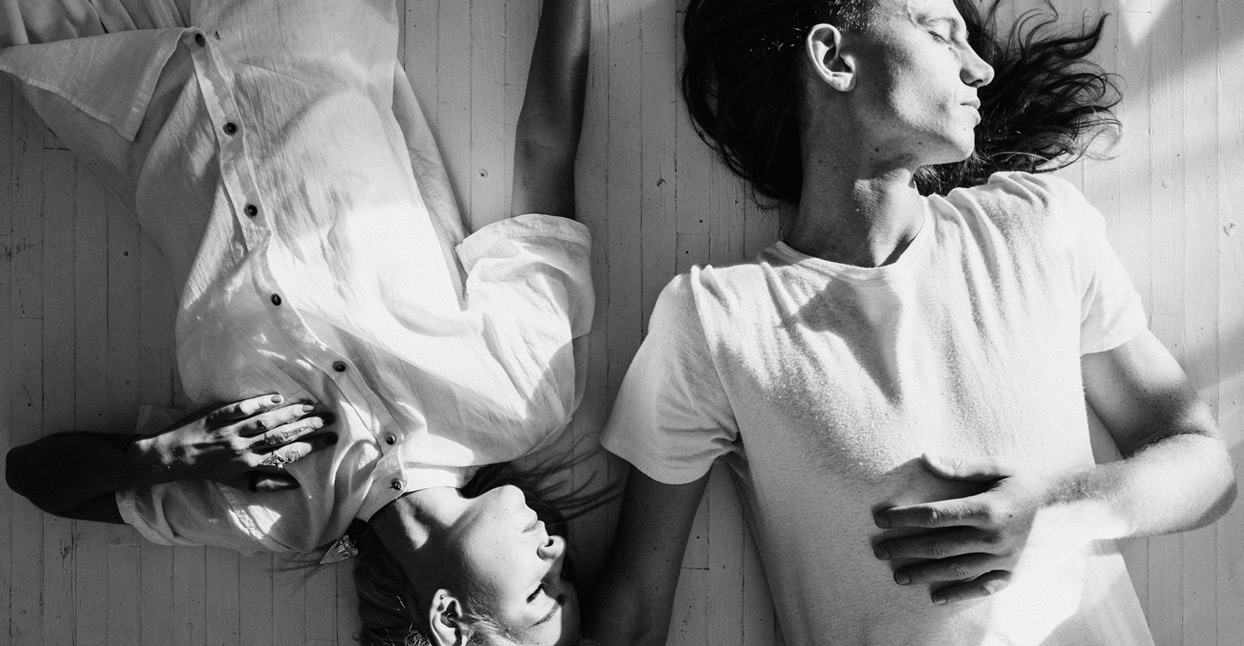 Every 28.5 days there’s a new full moon. That’s a fact that Cliff Usher and Lindsay Pitts of GEMS can offer up without consulting Google, having committed to releasing a new single with each lunar event. That tight production and release schedule has provided some unique challenges for the duo. (Usher cringes as he recalls mixing recent offering “Blow Out the Light” while lying sick on the floor thanks to a dodgy Korean sandwich.) But thematically, it was a perfect fit: their twilight pop is an appropriate soundtrack for moon’s waning and waxing. But perhaps even more importantly, the experiment satisfied the musicians on a very practical level.

“The project will probably come together as a collection of songs in some way,” Pitts says, seated at an outdoor café in downtown Los Angeles. “But for now we wanted to get back to the flow and momentum of putting a song out, interacting with people, and then putting another song out.”

But even with their eyes pointed toward the heavens, music has helped both Usher and Pitts overcome some very earthly concerns. As both explain, music has been one of the only things to provide a sense of stability while navigating both romantic snarls and defining their sense of belonging in an unstable world.

How did you decide to release music with each full moon?

Lindsay Pitts: It just came to us when we were brainstorming. We’re both into astrology—I’m really into astrology. I’m a Gemini with a Gemini moon and Pisces rising. Cliff is Pisces sun and Aquarius rising and Gemini moon. Your moon is your emotional sign. Your moon sign has to do with how you handle emotions and how you communicate emotionally. So it makes sense that we’re both the same.

I can see how music, being such an emotional process, can be linked to the moon.

Cliff Usher: I’d say the one thing that I think has the most likelihood to be real is the stuff having to do with the moon. Pretty much over the course of the last 10 years, I’ve paid attention to where the moon is in the sky, and what phase it’s in. I think that really affects things. We did a tour, and afterwards I wrote down the most memorable nights of the tour. And then I looked up the moon calendar. Every single most memorable night, the moon fell exactly on a night that was either a quarter moon, new moon, or full moon.

Pitts: There’s this energy thing. Often times, something will culminate on a full moon—a project that you put into motion. It would make sense that getting in the rhythm of this project we would finish a song as we’re getting up to the full moon, since usually that’s when things come together.

Usher: Before modern society, you would have to have been more in tune with where the moon and sun was in the sky. Now, we’re so cut off from that. Obviously, there’s a lot of danger of confirmation bias, but I feel like there’s really something to the moon. Just linking. I’ve been trying to get more into having a sense of that stuff.

Did writing about your breakup in “Blow Out the Light” help you reconnect on a musical level?

Pitts: Yeah, we went through a weird period after our album came out where things were falling apart. We were having a lot of difficulty working together. Eventually we decided to end things romantically. Then we had a few months of trying to adjust to that. We both traveled. I went to Brazil. It was a few months of us trying to reset and figure out how we’re going to come back together. Our relationship started musically. We were making music together before we were dating. So music has been our thing the whole time. I’ve been making music with a friend of mine once a week. But one thing I love about working with Cliff is that I trust that whatever he does production-wise, I’m going to like. I can’t say that about other people. When I say something vague, he’ll do exactly the thing I have in my head somehow. It’s like telepathy.

Usher: I read a paper that said that in the general population, people do a little bit better than chance on psychic tests than what you’d expect. The paper was talking about these studies at Juilliard and people did much better than chance—especially musicians. I thought that was really interesting, because it made me think, ‘We definitely have a musical connection.’ I think there’s something to the fact that music is non-verbal communication. You’re communicating and listening and reading another person, and you’re working in a field that’s invisible. You’re working with invisible vibrations. So you’re tuning into another person and trying to get on the same wavelength. Maybe there’s something to that.

Tell me about “Free Fall.” It sounds a bit different than things you’ve done in the past.

Pitts: I’m really excited about it, actually. I feel like it’s probably one of my favorite songs we’ve written in a while. My mom loves it. I played it for her! One of the reasons I’m so into music is because growing up, she loved new music, and she still loved finding new bands, and going to shows—mostly metal and hard rock. My music is kinda pussy.

Usher: She loves Baroness and Ghost. Bands like that.

How do your parents feel, Cliff?

Usher: My parents are more supportive. They’re not harsh critics. ‘You made a song! That’s great!’

The song raises an interesting question about the idea of fate. Do you personally believe in it?

Usher: There’s a little bit of stoic wisdom that has been helpful to me recently: the idea that you should accept your past and present as fate. Take a fatalistic attitude on everything that’s happened to you and where you are right now. You can use the present moment to control your future. Whether or not fate is real, I think for sure it’s useful to take a fatalistic attitude, because no matter what, there’s nothing you can do to change it. It’s so easy to get caught in that thing of, ‘I should have done this.’ Basically, you should never compare your present situation to other imagined, preferable circumstances.

Pitts: The thing I’ve been thinking mostly about is change being the only thing you can rely on. Everything changes all the time. I think I tend to cling to things. ‘If I secure this apartment, then I’ll feel good!’ ‘If I have this boyfriend everything will be okay!’ But it’s all an illusion. It’s not the same word, but I’ve been trying to live more in the ‘faith’ that whatever I’m doing is what I need to be doing. And as long as I have goals and I’m moving forward, stuff is supposed to happen the way it is. Just to not live so much in fear of trying to control the future.

When those negative voices in your head chime in, how do you silence them?

Usher: You’re talking to two super intuitive people. We’re both super intuitive types. We use our intuitions to make decisions and navigate the world. I’m at a stage in my life where I’m questioning a lot of things. It’s interesting. On one hand, I don’t feel like I made a ‘choice’ to pursue music. I think that the way it felt to me was very much like something I had to do. As soon as I considered that pathway, unquestionably—it was something I had to do. It was a matter of life and death. My experience of the world from my own feeling is very much one of ‘This is what I’m meant to do.’ I have to have faith and trust and follow my heart, and I have to live my life that way very much. It is interesting because there is the question of, ‘Is that real? Or is it just a feeling?’ It could just be an imaginary feeling.

Pitts: Cliff opened the door for me to do that. It had been this fantasy of mine for a long time, to be in a band and do music. But I didn’t have the balls to do it. So when we met at the end of college, we took off on this journey together. I had the feeling of ‘We have to do this, we’re going to change the world. If we make the music that is in our hearts, people will listen.’ I was definitely riding that wave.