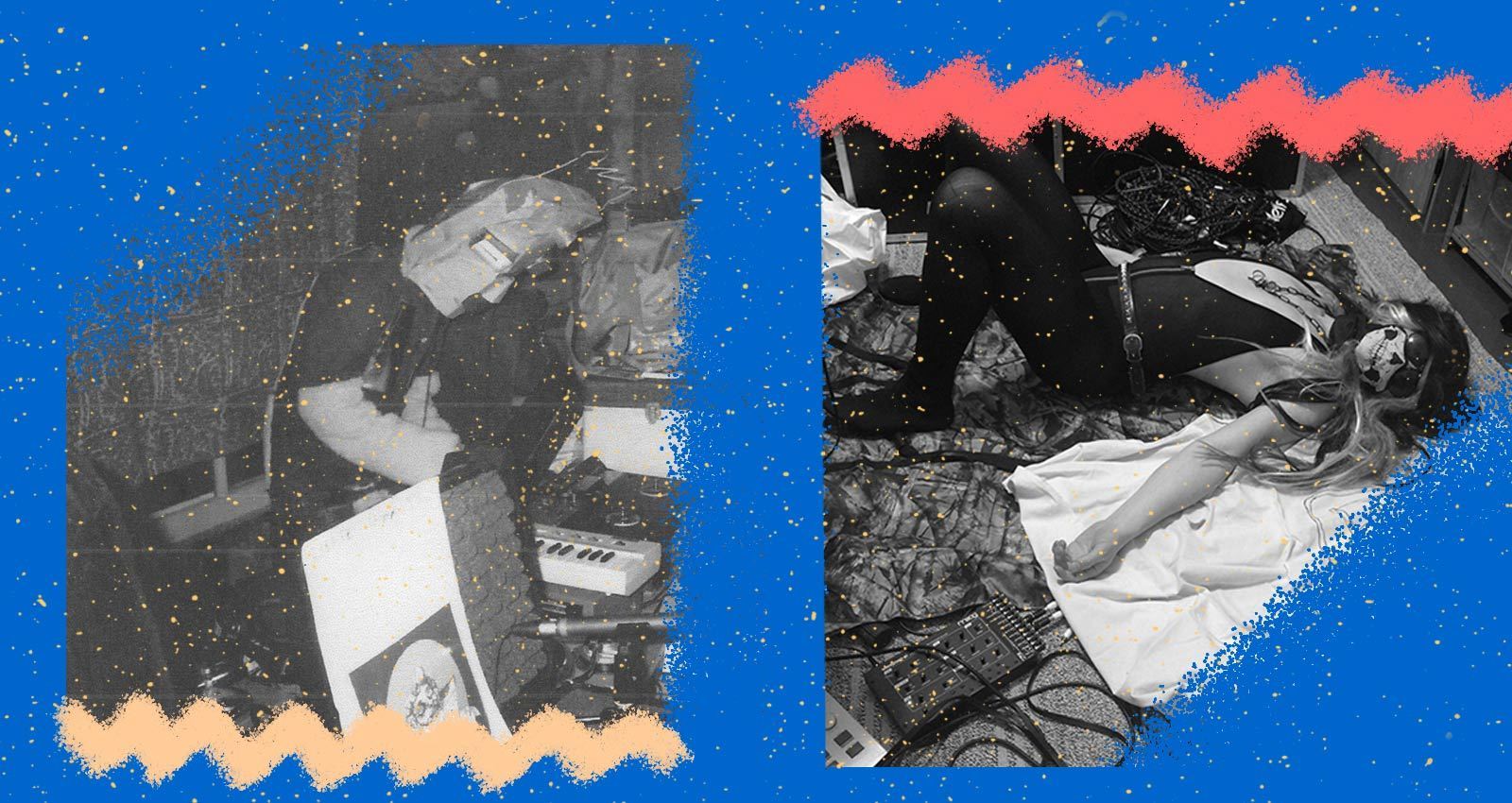 The interwoven political implications and personal significance of space show up again and again in the work of Gavilán Rayna Russom. The DJ, keyboardist, and producer officially launched her own label, Voluminous Arts, this year, and has put out three releases of her own in 2020—all of which play with these ideas in some way. Under her club music alias, Black Meteoric Star, there’s Disco, an album of dark-edged, simmering bangers made with a sturdily DIY approach; under her own name, the more cerebral, experimental Secret Passage; and Road Trip Tape Summer 2020, two longform pieces of sound art that interrogate our movement through geographies haunted by violence.

Interviews with Russom tend to focus on two big points of interest—the NYC-based DJ, keyboardist, and producer’s identity as a trans woman, and her well-known work with LCD Soundsystem. As she recently told The Quietus, “One of the things that has been problematic about most of my engagements with the press and the internet, and the world, is that somebody else has told the story, in ways that have been very specifically negating to what the story actually is.” This is why, when we sat down to talk earlier this Spring, I much rather wanted to hear about the aspects of her life and work that others have negated.

We began our conversation talking about the abandoned tunnels of Providence, where Russom hung out as a teen in the ‘80s, and which nominally inspired Secret Passage. The Providence of Russom’s childhood was at that point buckling under a complete collapse of the city’s economic infrastructure. What was once an industrial boom town in the late 1890’s and early 1900’s had given way to unemployment, housing insecurity, and profound disenfranchisement. Like many other cities in the U.S. at this time., the national highway system and redlining had deeply stratified Providence— it remains today one of the most economically unequal cities in the country. “You have this amazing thing here in New York where you can have these isolated communities that have their own integrity,” Russom explains. “Providence is too small for that to really take hold, so there [were] all these complex interactions between all these cultural forces, which is something really profound. Also, where I grew up led to a lot of violence, especially because there were these massive economic divides that were also more or less drawn along racial lines,” she says.

That decaying city infrastructure of the ‘80s left a lot of room to roam for an outsider kid hungry for connection. “There was this sort of remarkable ability to just walk out of my parents house—just skateboard or bike out of my parents house—and kind of drift through the landscape of the city,” she says. “I would encounter people that I knew, people that I didn’t know. I would encounter abandoned train tracks and factory buildings all over the place. There’d be home-built impromptu skateboard ramps that would sit for a while in the parking lot of some unused industrial building that I might discover that would become the place of social gatherings for a while. I might run into a friend of mine whose car broke down and hang out with them while they try to get their car fixed… And music was really the central thread of all these experiences. I didn’t grow up experiencing music as a commodity separate from social structures, I grew up experiencing music as an inscribed body-oriented language that existed within these social frameworks that were being created through drift and innovation and necessity.”

This “drifting” lifestyle eventually brought her to the defunct East Side Railway Tunnel, where like-minded youth would hang out, talk politics, and listen to music. In the pitch-black of the subterranean artery, Russom experienced everything from punk and hip-hop, to techno and metal. “[The] architectural space of the tunnel was really, I think, particularly important because it had all these acoustic properties and also these visual properties,” she says. “As soon as I would walk in, there starts to be this long echo and strange distortion of sound. When you would get to the middle of it—because it’s a mile long with a bend in it—you’d turn off the flashlight or the candle and you were in total, total, total darkness, the kind of darkness where eyes never adjust to it, and you start to hallucinate. I definitely had some real trippy experiences in there.”

Secret Passage subtly captures this sort of intensely psychedelic disorientation. On the opening track, bird calls and distant bells move through the mix, with the focus landing briefly on hissing, crackling synth buzz and droning synth bass. “Ghosts Wail In Us,” which opens side B, is haunting, with high-pitched, almost shrieking, sounds, and what sounds like crunching footsteps emerging from cavernous sound design. It’s pure horror film ambience, but with a naturalistic, human-scale sense of dread. “[“Ghosts Wail In Us”] is about when my cousin Mike and I were in there doing some music and some recording and began to hear a lot of sounds we were not making that seemed to be very ghostly. And we kept thinking that some prankster would come down the tunnel, and we would maybe encounter someone who was dangerous or maybe make a friend, but then no one ever came. It was just the sort of experience of seeing and hearing what really seemed like spectral entities, just being down there for so long that the whole apparatus of perception changed.”

Reckonings with ghosts crop up again and again in our conversation, particularly in discussing the connection between Secret Passage and Disco. When she began the Black Meteoric Star project back in 2006, Russom was living in Berlin and in a particularly bad way—without mental health treatment and without hormones. “I spent a lot of my life in severe depression, psychosis, not really able to ask for the help I needed,” she says. “That wasn’t a totally unfamiliar place to me and it wasn’t odd that I was also still able to still create then, because for me the impetus to create, and especially to create music, really came from a need to heal myself. Now, when I reflect on it it seems like a bizarre contradiction. But it wasn’t at all contradictory at the time that i could not take care of myself, and yet I could make a record without a computer, and with some broken pieces of gear, in my club promoter—who would later become my agent’s—apartment where he was letting me crash.”

”So when I began Black Meteoric Star it was really like that, I was right at the edge,” she continues. ”I was seeing demons and hearing voices in my head and wishing I would die in my sleep every night. It’s some real shit. I was also having the experience of a lot of things that had been important to me that I had kind of lost track of just hoisting themselves upon me as creative imperatives. So there really was this aspect of a kind of encounter with a shadow self.”

That personal experience making the early Black Meteoric Star material animated Disco, as does the idea of the club as a kind of underworld one enters late at night (“There was this parallel for me of the Persephone journey and the experience of going to the club, especially in a club in Berlin where when you walk out it’s fucking noon,” she says). She’s quick to shoot down any belief in the club as a ritual space of healing, though: “For the later 20th and early 21st centuries we inhabited these spaces to go listen to electronic music, and both the spaces and the music are really animated by many, many dead spirits, beginning with the dead Indigenous spirits of the land that you’re on,” she says. “So many of us are partying in spaces of exploitative labor, contested spaces of labor, places where there had been union organizing, where there had been strikes, where people have died on the job…And also in the music itself there are all these lineages that have been violently appropriated through sampling, so there’s this pile of dead people energy, none of which has been reckoned with at all.”

When it comes to specifically queer clubbing, too, there’s an extra layer of lost souls to contend with. “The murdered trans women, the people who died from AIDS, the whole fucking thing is, we’re sitting in a fucking broth of the dead, of which the living is a tiny little condensation,” she says. The Black Meteoric Star persona, the shadow self she mentioned, is “not limited by the notions of appropriateness that I have. That character is unhinged and does not care about anything, and is very angry about everything. Because that character is connected to this fucking broth of dead people—cannot understand why people refuse to reckon with it, is absolutely driven insane by the fact that people are blind to this and refuse to fucking deal with it. And really believes that it’s actually the only relevant thing for anybody to be dealing with, ever.”

On Disco, when Russom’s own voice appears, it itself is furiously disorienting, whether its pushed to the front and blown out on “Muscle Machine,” or howling in a parody of good-time rave culture on “Freaks Only.” Her shadow self is fully present. Yet she doesn’t view living in the “broth of the dead” as a negative thing, and though Black Meteoric Star was born from painful and difficult experiences, it’s allowed her greater creative range. Black Meteoric Star is a “sketchbook,” she says. “it tends to be pretty consistent now that I’ll explore something with Black Meteoric Star and then the larger solo work will catch up with it.” With Voluminous Arts, she’s trying to move away from the idea of herself as a professional musician to the idea of herself as an artist. “I think there [was] a while where I, just without realizing it, had internalized this ridiculous thing about doing something better than just the thing that I do, and I think the founding of Voluminous Arts, The Envoy, Secret Passage, really represent me like, really claiming my space, really reclaiming my space.”