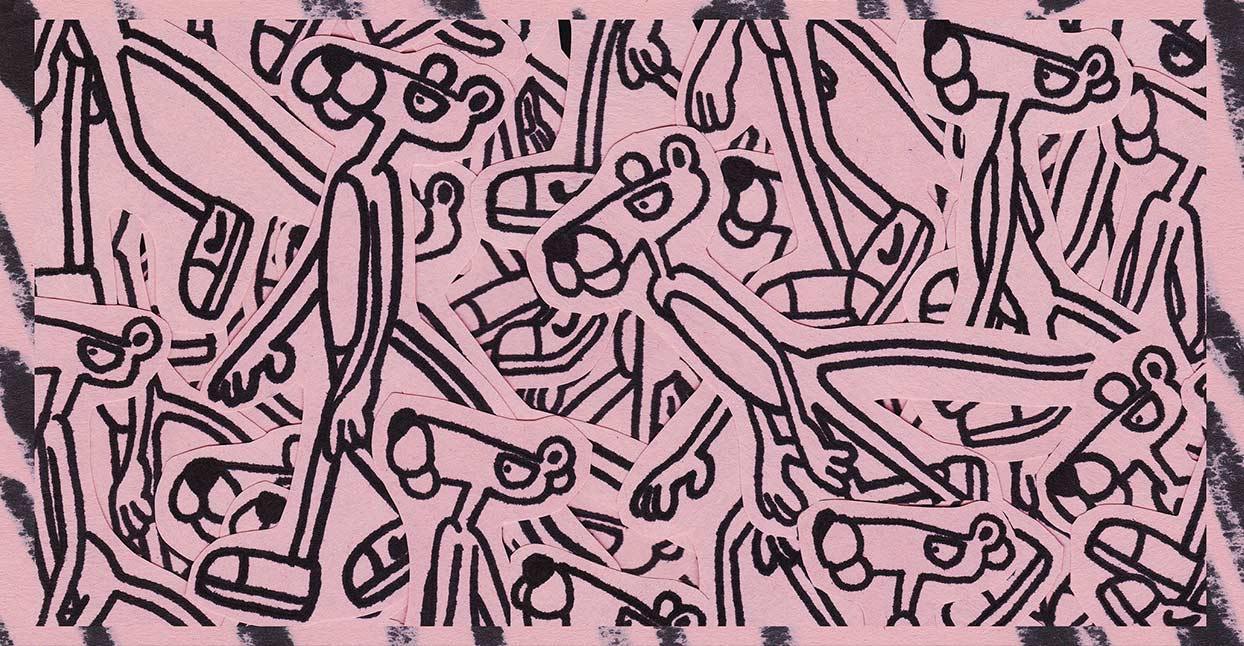 Marlon Sassy’s claim to internet fame arrived out of boredom.

In 2005, Sassy took an office manager job at a TV production company to pay off a $27,000 student loan from film school in Vancouver. Five years later, during his lunch break, he drew Snoop Dogg as pictured on 1996’s Tha Doggfather using supplies he had ordered: Sharpies, highlighters, a yellow Post-It note as his canvas. That first Gangster Doodles portrait became the first of hundreds Sassy posted online. In 2013, with 10,000 followers on Instagram and 30,000 on Tumblr, Sassy quit the TV production company to pursue art full-time. But after a year or so of focusing solely on completing one three-by-three inch portrait each day, the novelty of his own virality began to wear off.

“There has got to be more than just me posting every day and making art on Post-Its,” Sassy thought. “What can I do to push myself and make myself evolve as a creative?”

In 2017, Sassy self-published a Gangster Doodles book with a foreword by Stones Throw art director Jeff Jank and an introduction by Shia LaBeouf. (The actor has several of Sassy’s sketches tattooed on his thighs: Notorious B.I.G., Tupac, Prince, and Missy Elliott.) But another, more far-fetched idea Sassy had, on how to build his career with intention, arrives this month. Gangster Music Vol. 1 is Sassy’s first music compilation, featuring the likes of Kaytranada, Blu, Onra, and Father. Quelle Chris is on lead single “Brain of the Ape.”

The 27-track Vol. 1 isn’t overly curated. It opens with Eets‘s relaxed remix of “X” by 21 Savage and Future; later, a minimal and spacious instrumental by Jonwayne immediately follows three minutes of menacing Korean trap by “It G Ma” progenitor JayAllDay. Most of the album’s featured acts have thrived on the hip-hop fringes. Listening to them on Vol. 1 lets listeners into Sassy’s own independently minded sensibilities. “A lot of my friends in film school were listening to avant-garde music,” he says. “So I was introduced to Animal Collective and then lots of underground hip-hop: MF Doom, Madlib, a lot of Stones Throw stuff.”

To bring Vol. 1 to life, Sassy approached All City Records, the first label to commission his artwork back in 2013, from when he was still working full-time at the TV production company. (Sassy designed the recording package and merchandise for Knxwledge‘s WrapTaypes.) His initial goal was 10 tracks, but once he started reaching out and receiving songs like Maze Mountain’s scuzzy ballad “The Powers of Your Mind,” Sassy upped his goal to 20. That scavenger hunt took two years of soliciting and waiting and testing his own patience. “I’ve never done this before. Will it turn out to be a horrible piece of shit?” Sassy recalls asking himself, before he remembered that he waited nine years to quit his office manager job. “I’ve come this far.”

If Sassy had given up, he might not have been able to collaborate with Harlem legend Max B, the former Dipset affiliate and ghostwriter behind Jim Jones’s Top 10 hit “We Fly High,” who also offered his seal of approval to Kanye West on The Life of Pablo. In 2009, Max was sentenced to 75 years in prison for a fatal armed robbery, which got shortened in 2016 after he entered a plea deal to drop the original charges on his 12-count indictment for one sole charge of aggravated manslaughter. Sassy was drawing one day when 2007 fan favorite “Flash Dance” played at random on YouTube, and he thought to reach out against the odds. He found a man on Twitter claiming to be Max’s manager, who asked for $750. “If we’re going to do this, I’ll keep 20 percent and the rest will go to Max B in jail,” he told Sassy. But once the higher-quality version of “Flash Dance” arrived, Sassy never heard from Max B’s purported manager again.

In the final months of compiling Vol. 1, Sassy “threw a Hail Mary pass” and reached out to famed loop digger Madlib’s camp. Madlib didn’t have any completed tracks handy, but they offered to hand off an instrumental to his younger producer-rapper sibling Oh No. Sassy could sense the apologetic tone, though he didn’t see the camp’s suggestion as some compromise. “That would be the perfect way to go,” he said. A few short weeks later, the suspenseful “Big Whips” arrived in his inbox. “That was actually the easiest track to get, and the quickest,” Sassy says.

Sassy speaks of Vol. 1 as if he cannot believe his dumb luck: “I’d get this crazy adrenaline rush with each new track that came in, oh my god. I’d get 10 new ideas for 10 new pictures.” But Sassy has also spent years considering how he could live an artist’s life on his own terms, without student loan debt weighing him down. Like many folks, Sassy used Post-Its to map out his future, to capture even his biggest and most far-fetched ideas. He just happened to articulate that by drawing and sketching instead of writing on them, and in doing so, built his own world.