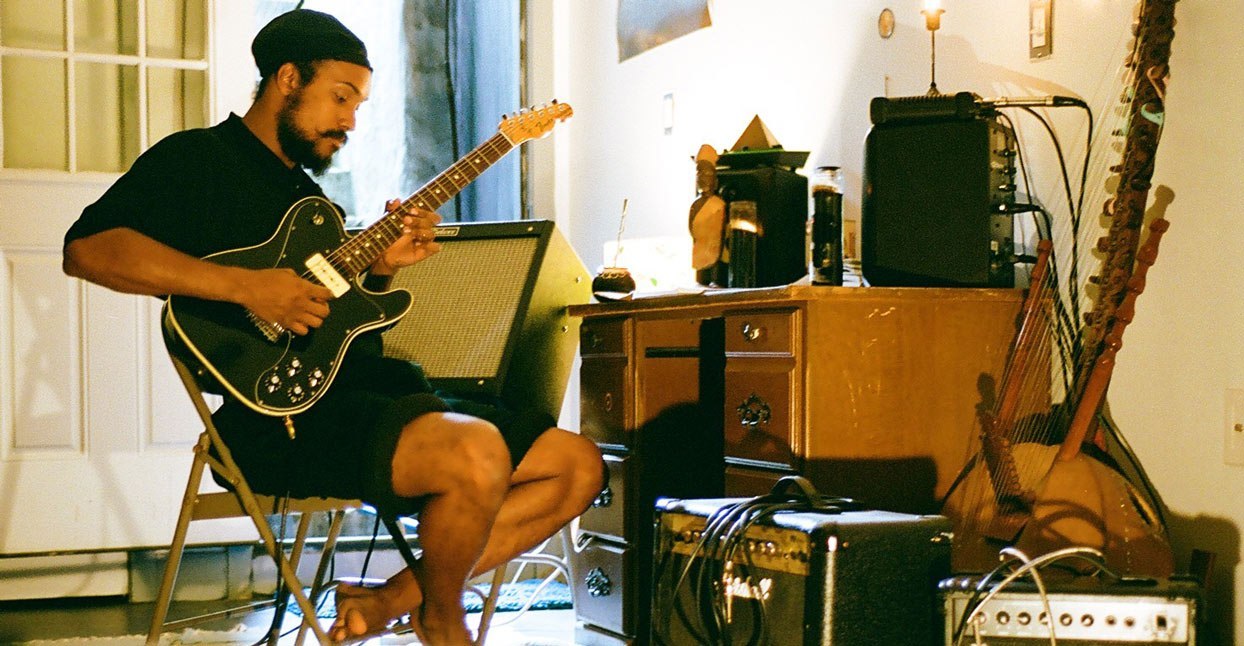 “There’s an old West African tradition of the griot,” says Gabe ‘Nandez, flashing a couple of gold teeth and nursing a coffee at the indoor Essex Market in Manhattan. “It’s like the version of the medieval bard who’d transmit history and culture through music. I wanted to nod to my half-Malian ancestry, and nod to where I feel hip-hop is traced to: It’s this very ancient form of journalistic storytelling reporting through music, which is hip-hop, you know what I’m sayin’?”

The 25-year-old MC and producer is talking about the inspiration behind the cover artwork and title track to his new album, Diplomacy. Also counting Argentinian heritage courtesy of his father, who works in peacekeeping at the United Nations, ‘Nandez spent his upbringing being ferried around UN outposts, splitting his formative years between New York, where he was born, and Tanzania, Haiti, and Jerusalem.

The album’s introductory song “Diplomacy” channels this globe-trotting backstory: Over a stripped-down acoustic backdrop that opens with flashes of kora, a harp-like instrument that ‘Nandez rescued from his basement, he weaves a fable that begins with its protagonist compared to a lion in the savanna and ends with the MC philosophizing about finding his place in the world. It’s an evocative entryway into a bewitching album whose emotional pull comes from ‘Nandez baring his soul about how his upbringing has shaped his character.

Home has been a constantly shifting concept for ‘Nandez. Being in a state of flux left him feeling “a big time sense of isolation.” Imaginary friends were easier to make than real ones: “I’ve got to be honest, I didn’t like moving and I wasn’t emotionally prepared for the adjustment and constant culture shock.” He picked up the tag “diplomat brat”—which he cops to in the song “Great Ones”—and says that simply being the son of a diplomat and living in an ex-pat community “puts you in a certain strata of society.” Addressing a line on “Great Ones” where he raps “I was all good with my third world standing,” he says, “because of the reality of my status, I was fine / By virtue of being a middle class person from the west, you export that to a developing country and you’re fuckin’ ballin’.”

Having learned to play the guitar at age 11 when he was in New York, ‘Nandez also earned a reputation as “the guy that plays music.” When he was a 13-year-old living in Dar es Salaam, Tanzania, he bonded with a few other kids over “the bad shit we were into, like drugs and graffiti.” (‘Nandez used to write Vader and Spat.) ‘Nandez was mainly listening to hardcore and metal music, but began freestyling once his father brought him back a CD copy of MF Doom and Madlib’s Madvillainy album from the now-shuttered Virgin Megastore in Manhattan’s Union Square.

Around this time, ‘Nandez’s brother, who’d already pledged allegiance to becoming an MC, passed away. The family journeyed to France for the funeral. After scattering his brother’s ashes, ‘Nandez remembers “his homies played this a cappella of him going super hard. It was intense, surreal, clearly a sign.” ‘Nandez realized hip-hop was his calling and vowed to pick up the MC baton from his brother. (To this day, ‘Nandez has a recording of his brother’s verse on his phone.)

Unfortunately, ‘Nandez’s hip-hop career threatened to become derailed by drug and alcohol addiction, the seeds of which were sewed when he was a 13-year-old. “By the end I was a garbage head,” he recalls. When ‘Nandez found himself checking into the same hospital twice in the same week for overdoses, he realized he needed to get sober.

After successfully completing rehab, ‘Nandez emerged clean—and with a new approach to his bars. “I was like, what are you trying to do here, flex and show how many words you know?” he says. “I feel like I had to learn to rewrite and be simpler and less esoteric. I want to have an emotional effect.”

This clarity and smart economy of language gives Diplomacy its emotive impact. ‘Nandez’s lyrics are anchored by deep, buoyant basslines; flashes of instruments he’s picked up around the world add heat and texture to the songs, like the use of a balaphone on “I.D.” (The instruments are employed to honor ‘Nandez’s parents’ roots.) “My songs are super personal, super raw and honest, they’re dark and also bright,” he says. “No matter what I’ve been through and the places I’ve been to, people can relate to the emotions.” Conveying the core of Diplomacy, ‘Nandez adds, “My music isn’t rooted in material things—it’s rooted in individual observations that are shared. Music should be personal but universal at the same time.”