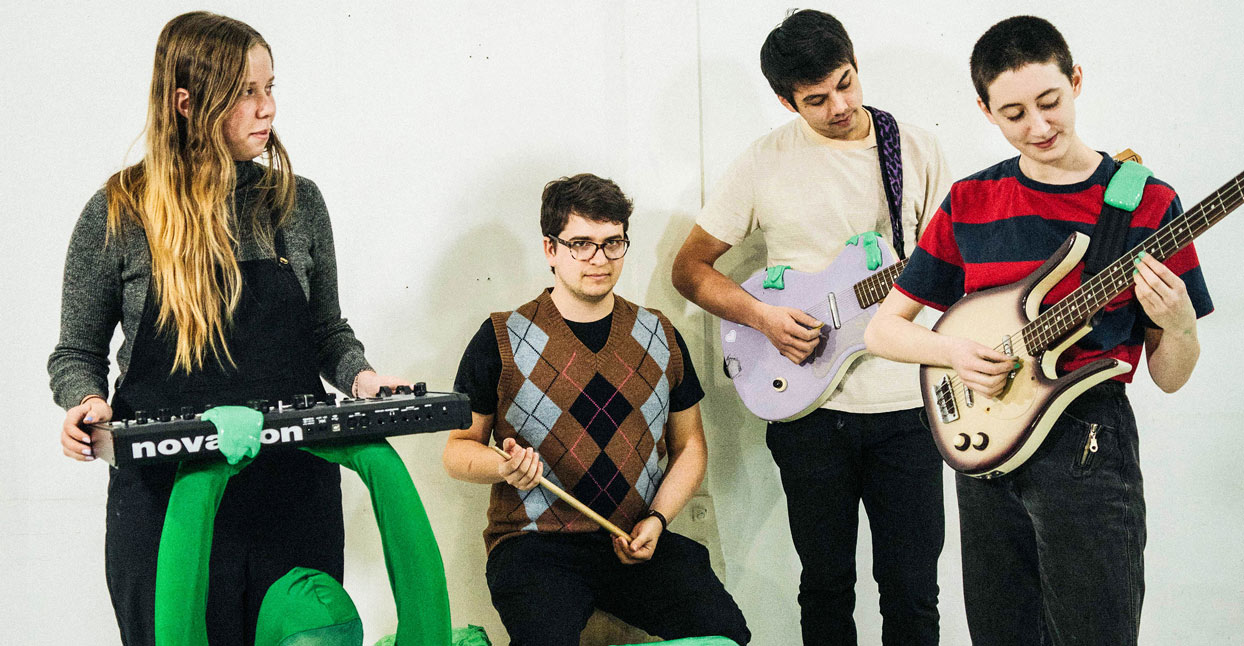 For the last five years, Greta Kline has used her Frankie Cosmos project as a way to explore her emotions. So it’s fitting that the album on which she shares her most intimate, painful memories has a title that hints at the idea of music as a vehicle for exploration: Vessel. At first glance, the album scans as a collection of breakup songs, a painful tour of a deteriorating relationship. But it’s more than that; Vessel is a story of empowerment, documenting Kline’s journey to self-love by closing the door on a difficult past. On  “Apathy,” she sings, “Looking around at 22 / And so tired of myself around you / Maybe I don’t fit your ideals anymore / Or maybe I just grew into a bore.”

Kline began writing Vessel just a few months after 2016’s Next Thing, while she was still processing her emotions. “I feel like just sometimes, for me, especially with Vessel, a lot of the songs have this weird tension, because I was writing breakup songs while I was in this relationship, and I felt like I couldn’t end it,” Kline says. “I was writing these really painful songs about how bad it was, but not being able to say it. A lot of the songs are trying to figure out how to fix it, and how to live with it. What do I do? It’s interesting to listen to them now that I’m out of that relationship, and think, ‘Wow, it was so much worse than I even knew.'”

For Kline, the process of creating Vessel went beyond unpacking her own suppressed emotions. It also gave new meaning to older songs, like “Duet,” self-released on Bandcamp during the project’s earliest days and reworked for the album. “Duet” references her previous relationship; in it, Kline sings, “I couldn’t stop if I tried, I will love you till I die.”

“[‘Duet’] has come to be this story about two people who are both me, or one of whom I’m just projecting onto, and [thinking about] what you want the other person to say, and what I want myself to say. It has this whole other narrative for me, as opposed the narrative it had when I wrote it,” says Kline.

In addition to Frankie Cosmos, Kline also plays in Lexie, a collaboration with her current Frankie Cosmos bandmate Alex Bailey, which allows her to access a different side of herself. Kline still channels her own anxieties in Lexie, but the dynamic is different. For one thing, in Lexie, Kline and Bailey share writing responsibilities.

“It’s totally still my lyrics, or the lyrics that I wrote are very purely me, the way that Frankie Cosmos is. But there’s a lot more collaboration,” says Kline. “There was a song that [Bailey] brought in, that was basically finished—the song ‘Tonight,’ but he had only written his part, which is about wanting to murder someone. And then I said, ‘What if it’s a song about a lover’s spat, and I do a duet part that’s countering yours, where I’m going to bed and we’ll talk about our fight tomorrow, and you’re going to murder me?’ I wrote this whole other part of the song that completely changed the meaning of the song, but it’s the kind of song that I’d never just come up with [on my own].”

Even in the moments that feel strikingly different from Frankie Cosmos, Lexie retains Kline’s innate sensitivity, and her ability to invite listeners into her story.

Vessel is also Kline’s first record for Sub Pop, which means her music could find its largest audience to date. The days when Kline would upload songs immediately after recording them in her bedroom are long gone, but her songs retain the sense of intimacy that attracted fans to them in the first place. Instead of shying away from the responsibility that comes with being a relatable figure for young fans, Kline has embraced this role, and opened up the conversation. “If you’re really listening [to my music], you know I can’t give good advice!” she jokes. “The last year has been really fun, because a lot of young people will come up to me and say, ‘I have a crush on someone and they’re not nice to me,’ and I get to say, ‘Don’t go near them, they suck.’ All of a sudden, I just get to say that to everyone. I wish somebody said that to me when I was 17. So, it’s kind of fun to just go and say that to a bunch of teenagers across America.”

Kline, who has just finished reading the Harry Potter books, says, “I have this joke now, where I’m Luna Lovegood, and anyone who likes Frankie Cosmos is Harry and Hermione and Ron, where I just think they’re my best friends, and they don’t realize it. I just have drawings of them in my room, and I’m just like, ‘Friends! Friends!’”

Her fans have also helped Kline decipher her own lyrics, even though they were often written before Kline had processed what she was experiencing. While touring for Next Thing, fans would come up to her and call it a breakup album, and tell her that it resonated with them. Kline would initially try to dissuade them. “I’d be like, ‘Oh, no. It’s not that,’” she says, “just me with my blank stare trying to convince them. I’d be like, ‘Oh, no. It’s not that.'” Ultimately, playing the songs and seeing the audience reaction helped her find a therapeutic way to express the emotions she was feeling while touring in support of Next Thing. It also helped her connect with fans who were experiencing similar struggles.

She remembers a fan telling her that the songs on Next Thing reminded her of a toxic relationship they were in. “I was like, ‘I hope you guys broke up.’ And she was like, ‘Yes, we did,’ and I was like, ‘Yes! That’s awesome, me too,’” says Kline. “It was such a great moment, just somebody who connected with it. And I was like, ‘Yes, good, we both got out of this horrible thing.’”