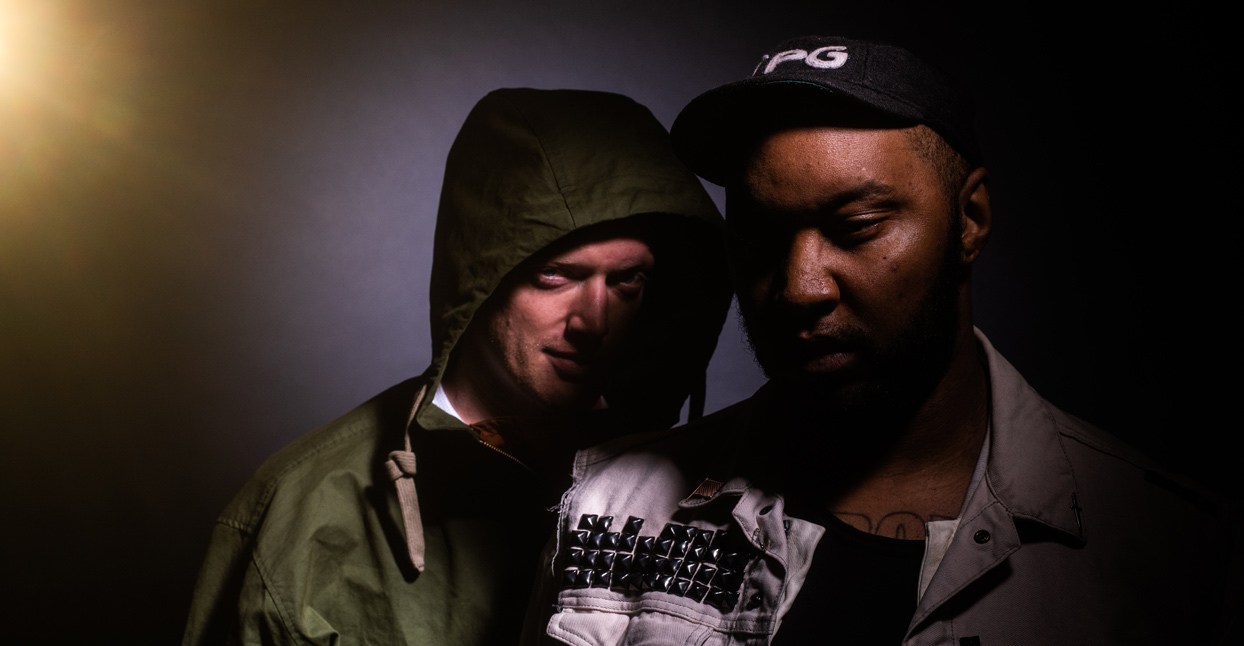 In 2004, P.O.S was the poetic firebrand at the front of Minneapolis hip-hop collective Doomtree. Astronautalis was a charming motormouth smirking his way out of a Texas college town. That year, they ended up on the same stage at Warped Tour, and after seeing each other’s sets, they made a pact to do a record together.

They named their collaboration Four Fists, but that’s about all they did with it. From that point, the two continued their separate lives. P.O.S got signed to Rhymesayers and rereleased his demo. Astronautalis started doing extended tours in Europe. P.O.S had a second child. Astronautalis got distracted by his obsession with Harley Davidson motorcycles. Their album cycles synced, but it took over a decade for the gaps in their schedules to align.

Fourteen years after their Warped Tour pact, 6666, the debut album from Four Fists, has finally arrived. The album is jaded, frenetic, and not at all what would’ve emerged if the two had gotten in the studio together back in 2004.

6666 is Four Fists’ second attempt at a full-length album. Between 2007 and 2008, P.O.S and Astronautalis met up in the Twin Cities and ended up recording four songs. They released two of those songs on their next solo records (“Story of My Life” off Astronautalis’s Pomegranate and “Handmade/Handgun” off P.O.S’s Never Better), but the other two cuts languished. Then, in 2012 when P.O.S’s kidney failed, he had to pause making music entirely. Four Fists released the latter two songs, “Mmmmmhmmmmm” and “Please Go,” as a 7-inch in 2013, the same year Astronautalis moved to Minneapolis permanently. That was the last time either mentioned the project until earlier this year.

When they finally came back together, they were totally different people. Both had undergone their own artistic transformations, going from lo-fi punk rappers to fully-fledged adult artists. Both had headlined the Minneapolis avenue First Avenue and collaborated with Justin Vernon. P.O.S had a fresh kidney and a new sense of purpose. Astronautalis got married and had started to feel rooted, for once. It’d been nearly a decade and a half of parallel maturation, but this was exactly what 6666 needed to be the album it is.

“We’ve both been weird life coaches to each other,” Astronautalis says. “We go through a lot of the same shit, but we never go through it at the exact same time.”

“[6666] is a culmination,” P.O.S adds. “These songs are really important songs to me. I don’t know that any songs we could’ve made before would’ve been as important.”

6666 comes in two parts. The first five songs act as a protracted howl, with the two retired punks dismayed at how the revolutions of Sid Vicious and Joe Strummer have collapsed into apathy. “Nobody’s Biz” calls for a sustained riot. “Bobby Hill” tells off the false revolutionaries the pair see parading on Facebook. It’s not until the album’s sixth track, “Joe Strmmr,” where they pivot on that idea and accept that being angry is not the solution it might’ve been in their early 20s.

“The first half of this record is very much like barfing these toxic fumes out,” Astronautalis says. “But I had this realization that there’s this new frontier in waking up on the weekend and hanging out with my wife. It’s a wild and exciting, scientific development in my life. Going to the dentist and getting my teeth fixed and being a normal human being is, in itself, its own incredible revolution.”

P.O.S admits that 6666 was a difficult record for him to write. His early work came to him in autogenic bouts of anger and apology. He doesn’t demo, and he doesn’t rehearse. So looking over and seeing his friend of 14 years writing sentimental yarns about finding lasting happiness forced him to go deeper.

“I’m coming more from a point where… I’m able to let go and actually look at what a future would look like,” P.O.S says. “My life story kinda fits the arc of the record. The beginning of the record is turmoil and stress, and then towards the end of the record, I was feeling surrounded by people who are real married and sturdy, and I wanted to bring that into my life.”

So much of 6666 feels like destiny. Like planets on opposite sides of a star finally crossing orbits. When Astronautalis wants to mess around and talk shit about Twitter (like on punchline-driven single “Dork Court”), P.O.S is right there challenging him to go even more absurd. When P.O.S needs to burn down the systems of oppression (“Annihilation”), Astronautalis is first to the fire. There are references that clearly trace back to the progress each made on P.O.S’s We Don’t Even Live Here and Astronautalis’s Cut the Body Loose, but Four Fists needed to be more than the sum of its parts.

To make sure of that, P.O.S and Astronautalis gave all their final tracks to Dutch producer Subp Yao. Yao had impressed Astronautalis with his gritty deconstruction of his 2016 single “Sike!,” so the pair endowed him with total creative license. “It was like [P.O.S] and I made a bunch of demos, then put them in a cardboard box, mailed them off to an address, and they came back an album,” Astronautalis says. “We made some great songs; Subp Yao made it a great record.”

Yao’s mixes combined with P.O.S’s clarity and Astronautalis’s actualization make for an album that’s startling even for longtime fans of the kindred musicians. Each raps here with fullness, with renewed energy and direction, steering confidently around one another. 6666 might’ve arrived a near-generation after fans would like, but it’s better for the waiting.