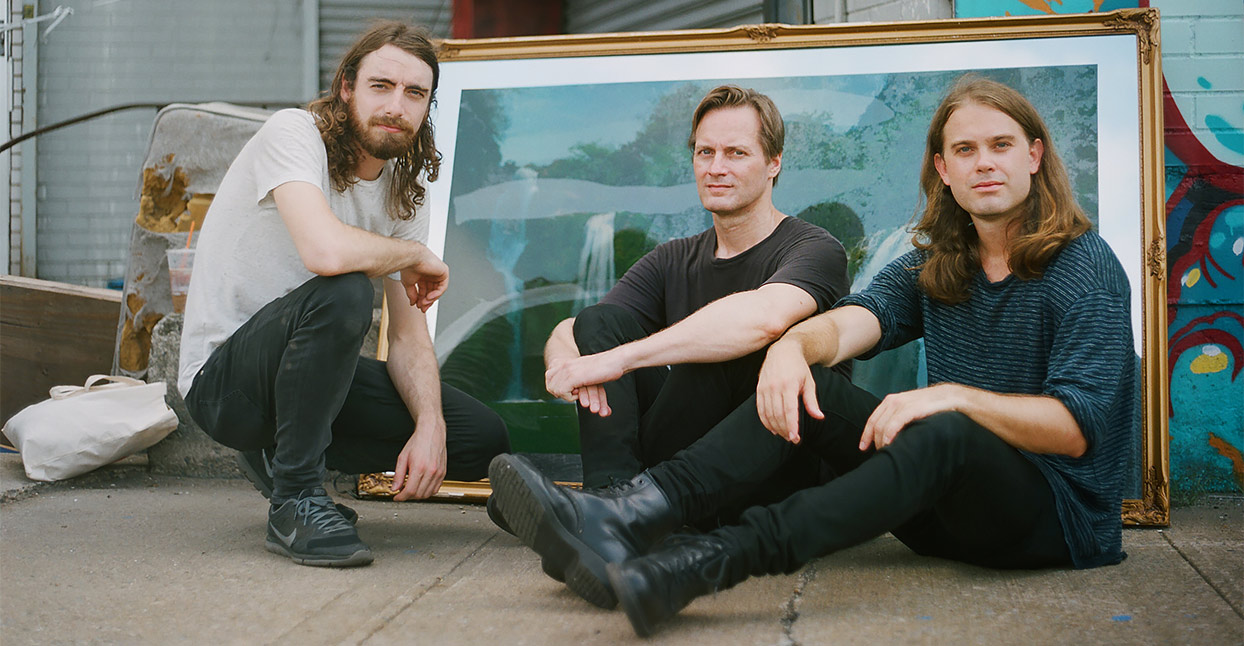 Chance has always been important to New York electronic trio Forma. Mark Dwinell, George Bennett, and John Also Bennett (no relation) improvise all their music, rarely predetermining anything beyond a few synth patches or drum machine patterns. “The way that Forma works, ideally, is setting conditions, setting an environment,” says Dwinell. “And then capturing all of it.”

In the case of Physicalist, their third full-length and first for Kranky, Forma captured six hours of sound over two days of studio jamming, then edited the results into an 11-track, 68-minute double album. This extemporaneous approach seems at odds with the album’s title, which refers to the idea that everything is determined—that the entire universe is a causal chain of events with no room for chance or free will. But the paradoxical notion that improvisation could exist inside a scripted machine is exactly what drew Forma to the name.

“It’s interesting that a physicalist might say that our music could be predicted theoretically, based on the material state of the universe,” posits John. “Like, I decided to do a wanky solo at this point based on the state of the atoms in my brain.” George offers a clarification, saying, “This isn’t necessarily us endorsing this philosophy. It’s more like a proposition to get us to thinking about the dynamics of how we make music.” Dwinell agrees. “It’s about removing mystery,” he says. “And dealing more directly with exactly the materials at hand.”

Though their previous albums were created solely with electronic tools, for Physicalist, Forma added acoustic instruments such as flute, piano, and percussion. ”All of us have a history of being trained on acoustic instruments, so it felt like a return,” says Dwinell. “It felt very natural, and opened things up.”

The change is especially noticeable on tracks with a classical bent, such as the dramatic “As If Pianos Grew on Trees” (whose title quotes John Cage’s reaction to people calling electronic instruments unnatural) and the emotive “Improvisation for Flute and Piano.” But even on songs where acoustic elements are less obvious, there’s a greater sense of interplay among the trio than on previous efforts.

“There are more dramatic dynamic changes, because so much of it was done by hand,” says John. “You have a lot more instant feedback, and the give and take is more enhanced.” “For me, it was less about whether I was playing an acoustic drum or an electric drum pad, and more about getting off the rhythmic grid,” adds George. “Doing things in odd meter, or doing things that have more rhythmic nuance, and more expressive potential.”

That expressiveness comes through in another new aspect to Forma’s music: the song titles. On their first two albums, 2011’s Forma and 2012’s OFF/ON (both on Spectrum Spools), most songs were labeled simply with a number (e.g. “Forma 237A”), as if they were computer-generated files. “When Forma started, each track was literally the next thing we did, from constant improvisation,” says Dwinnell.

This time, Forma decided to add verbal meaning to their instrumental songs. It wasn’t easy. “We have a very strange relationship to language in our band,” admits George. Adds Dwinell, “We were wary, especially in early Forma, of attaching a word to things. It felt meaningless and irrelevant. But we realized there’s a beauty to it, too.”

“We went as far as we could in the opposite direction—it was almost like a hyper signification,” recalls George. The band ended up filling a long Google doc with potential song titles that were drawn from many sources, including the I Ching. “We found a million different rabbit holes, and it’s all referential. We wanted to open up the floodgates and let all our influences hang out there.”

An influence that is less prominent on Physicalist than on previous Forma records is dance music. Two years ago, the group dove deep into that scene, performing in clubs and making their most body-moving record to date, the Cool Haptics 12-inch on influential NYC label The Bunker. “We experienced the ecstasies of playing a crazy techno set and getting the crowd going while improvising,” remembers George. “It’s extraordinarily challenging to keep people moving when you don’t know what your next move is,” adds Mark. “To figure out how that works was a pretty profound learning experience for us.”

Forma put their dance leanings aside when making Physicalist, returning to open-ended improvisation with no specific genre or audience in mind. But they insist the album wouldn’t be the same without their time in the club scene. “[Playing in dance clubs] forced us to be aware as a group in a different way, and it improved our chops,” John says. “To take those chops and apply them to something with a different set of rules was exciting. And I still think there are some tracks on Physicalist that you can dance to.”

Preparing to perform again, Forma has retraced their steps on Physicalist to memorize songs they created on the spot. “We won’t be duplicating them exactly how they are on the record,” says John. “The songs will grow and extend themselves and have new life beyond how they exist on the record.” George concurs. “It forces you to decide what’s foundational to a piece and what’s not,” he says. “What needs to be part of the spine and where things can deviate. It’s a matter of figuring out where to draw those lines.”

Having to learn songs you created yourself seems oddly circular—but then all of  Physicalist has a circular quality. Even the philosophy behind the title—the idea that we’re all just cogs in a pre-set system—has made its way into Forma’s improvisations. “There’s a limitation to the degree of control you can exert in the instruments we use,” says George. “These machines do kind of have minds of their own, and we’re just there to occasionally give it a push off in one direction.”

“It can feel like you’re guiding a spaceship,” says John. “You can definitely steer it, but if you pull it too hard it’s going to crash. What the music ends up being is a result of our years of practice and working together.”

Music as a result of a causal chain? That sounds rather… physicalist. “It doesn’t mean that there’s no beauty,” John interjects. “Whether or not the universe is a result of purely material actions doesn’t effect how I experience beauty or transcendence. If a transcendent moment was the result of some molecules hitting each other, that doesn’t change how transcendent it is.”