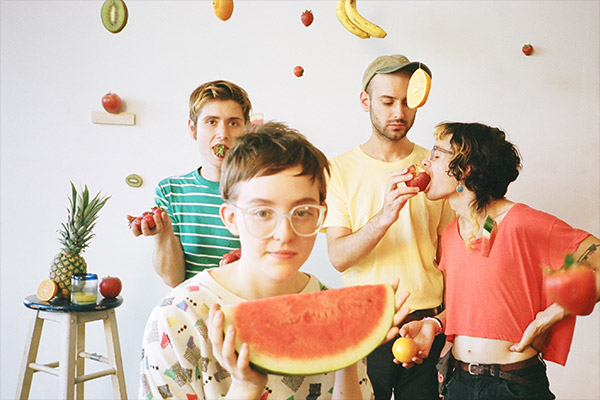 “I think making the record made me realize the importance of not being afraid to have help and have support.”—Emily Sprague

On the day that Emily Sprague almost died, she had been living in her new Brooklyn apartment for just over a week. She and her friends had moved from an apartment in Bed-Stuy, where they were living after their residency at the Bushwick co-operative art space Silent Barn had ended. She’d scored a gig as a dog walker, a way to pay the bills while working on music as Florist. She was bicycling up Broadway on New York’s Upper West Side, and was making a left turn when a semi suddenly appeared, trying to beat her to the turn. “The way it works when a truck with a long bed makes a turn is that it doesn’t actually turn, it just kind of sweeps,” she explains. She’s sitting in the Grey Dog Café in SoHo, telling the story with a kind of amused detachment, as if she’s relaying something that happened in a slapstick comedy. The reality of the situation, though, was grave. “There’s a concrete median on Broadway, so I got stuck,” she says. Trying to get free while the truck was still in motion only made the situation worse. “I ended up falling off of my bike and rolling underneath. I remember looking up at the bottom of the truck and thinking, ‘OK, well, this is it. I’m literally going to die right now.’”

When she got free of the truck, Sprague shot bolt upright and tried to mentally assess the damage. “I had no idea what had happened. I was just in total shock. A cab had been right behind me the whole time and pulled up next to me and was like, ‘Holy shit!’” The cab driver gave Sprague a ride to St. Luke’s Hospital, which was only two blocks away, where the doctors told Sprague she’d broken both her neck and—just as frightening for a guitar player—her arm. After keeping her in the hospital for a week, they released her to her still-new apartment in Sunset Park for the long work of recovery.

The accident, and the months that followed, comprise the backbone of The Birds Outside Sang, Florist’s deeply moving new record in which Sprague wrestles not only with injury, but mortality, documenting her condition with both striking narrative precision and fits of grim humor. Both are on display from the outset: the album opens with Sprague, over a nervously-palpitating keyboard, singing, “I can’t feel my right-side ear/ but I’ll probably still not listen to jazz/ and I can’t feel my left-side hand/ God, I hope it comes back to me again.”

From there, songs unfold quietly and tenderly, Sprague’s gently-creaking voice nestled safely in the center of plinking, thrift-store keyboards and, in the album’s last half, tense, taut-cable guitars. There are nods toward the hushed, nighttime balladry of The Softies, but where their albums conjure a kind of cottony fantasia, Birds is stunningly clear-eyed. In the elegiac “Only A Prayer Nothing More,” Sprague sings, “Thunderstorms—a friendly thing that remind me I could be dead” as guitars vibrate quietly behind her. Like all of the songs in the record’s last half, it was performed with all of the members of Florist: Rick Spataro, Jonnie Baker and Felix Walworth. The record’s first half is just Sprague alone, and the production is a marked difference from the airiness of the last five songs. It’s suffocating and stark with songs like “Rings Grow,” comprised of little more than bare-branch guitars and sorrowful group vocals. “All of those songs are the actual recordings that I did when I was in a neck brace with one arm,” Sprague explains. “I recorded the first song on this tape recorder, because it was the only thing that was plugged in and ready to go. The second half is all of us playing together.” The decision to split the record was intentional. “It has to do with this idea of recovery being something that you do by yourself, but also that there are some things that you just can’t be alone for. You can’t just be alone all the time forever. And so it’s all of us, together. It’s this ‘help me’ kind of sound.”

It’s a natural dynamic for a group whose roots run deep. Sprague met Spataro when they were both in high school (she was in 9th grade, he was a senior), and he took a shine to a demo she’d uploaded to MySpace. “The first song I ever wrote was called ‘Sounds Just Like Ice Cream.’ It was probably a minute long, and I played it on a ukulele. I put it on MySpace, and I got a text message from Rick while I was at my friend’s house, and I was freaking out. We weren’t really friends, but I was a little bit in love with him. He was the only cool guitar guy in in my high school, the only one who played music and had cool taste and was kind of cute. I remember being like ‘Oh my God!’”

The rest of the group came together naturally — Spataro and Baker were living together in Albany, and they met Walworth, who also plays in Told Slant, when they all played a show together in Hudson. To hear Sprague tell it, what grew out of that was a connection that runs deeper than shared songwriting—something more familial than professional. “Rick and Jonnie, they’re the first friends I really ever had in music, and we’ve shared so many moments together, talking for hours. And Felix was somebody who has helped me so much through this whole process. What we do together is more special than anything we each could do alone.”

Birds is a testament to that, to the power of perseverance and friendship, and a gentle reminder of the beauty of life. “I think making the record made me realize the importance of not being afraid to have help and have support,” Sprague explains. “And also to have a little more peace with being alive. You have very little control over the things that can happen to you. There’s still a difference between knowing that I will die one day, and having the thought that I am about to die. It’s kind of just a step toward realizing that you are not invincible. Because while I know that it’s scary, and that someday it will end, I really do believe that it’s just fine. I believe that now. And I don’t know if I did before.”