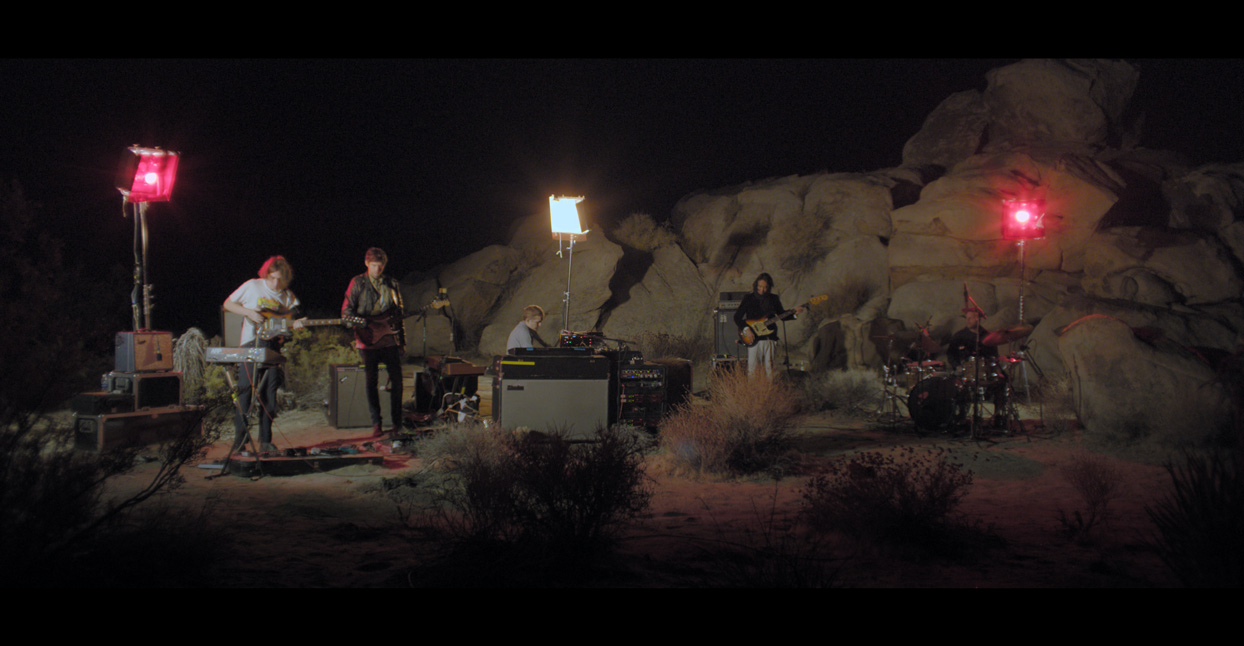 Sam Shepherd didn’t mind sleeping outside in the Mojave Desert while he was recording the new album with his band Floating Points, but there was one thing the British musician and DJ was concerned about.

“Every night before I’d go to sleep, I’d look up statistics about coyote attacks on people, which occur more often than you’d think,” Shepherd, who also has a doctorate in neuroscience, says. Because rock formations and other geological features in Joshua Tree National Park—where he and his bandmates were—masked the noise of the animals, “you couldn’t tell whether they were 20 meters away or 200,” he says.

Those same geological features quite literally shaped the sound of Reflections – Mojave Desert. The project is both Shepherd’s second album as Floating Points as well as a short film by Anna Diaz Ortuño, a filmmaker from Barcelona, Spain, who also designs the visual parts of Floating Points’ stage show. Reflections – Mojave Desert is a collection of five new songs—mesmerizing, atmospheric compositions that Shepherd and his band recorded outdoors, complete with the sound of the wind and echoes from the landscape surrounding them. “The reverb you hear on the record is just the natural reverb of the environment,” Shepherd says. “It almost feels synthetic because it was such an unreal place.”

Making an album wasn’t even part of the plan when Floating Points set out for Joshua Tree late last August. With a gap between gigs in Los Angeles and Phoenix, the band had planned to simply practice and relax. “We were looking for a place in between to stay for a week, somewhere quiet and cheap where we could house all the crew,” says Shepherd.

The desolate beauty of the desert, and its effect on how the music sounded, seemed to call for documentation, though. “I have this memory in which I was hearing the band rehearsing, and I found myself between the mountains, and I was hearing the reflection of the music between the mountains, and it was so beautiful,” says Diaz, who made the film through her production company Hamill Industries.

Floating Points started by setting up a couple of cameras to film rehearsals. “That had a snowball effect, and we ended up hiring in professional lighting and cameras and generators,” Shepherd says. “None of it was pre-planned, it was done once we got there, and it was a function of being really taken aback by the environment we were in.”

Along with shots of the musicians playing together in the desert, and on the porch of the house they rented, the film mixes in stark footage of the arid scenery: dry, scrubby brush clinging to rocks, cacti and yucca-like Joshua trees amid the otherworldly scree, and an endless blue sky stretching away into the distance. “What I wanted to bring with those shots was this feeling of openness,” Diaz says. “The land and sky are part of the same, and everything looks dead, but it’s not dead at all. I wanted to play with the textures the desert was giving.”

One series of shots in the film illustrates the way the landscape influenced the shape of the music. Shepherd is shown picking his way across a rubble of boulders, carrying a hyper-directional microphone that looks like a handheld satellite dish. Next, he’s shown creating a synthesizer loop played back through an amplifier. Diaz records the sound from different distances, using the hyper-directional microphone. The resulting audio, which became the track “Kites” and plays in the background of “Kelso Dunes,” has an eerie phased feel, echoing from far away one moment and sounding close up and dry the next, depending on the distance of the microphone from the amplifier, and the way the sound bounced back off of nearby rocks. “It was like playing a game somehow, but I was only thinking about editing and rhythm and perception,” Diaz says. “I wanted everything to flow—have Sam’s music flow.”

The varied sonic reflections came as a surprise to Shepherd, who had expected more of a dry, flat sound. “You’d get straight reflections, a delay sound, but also complex reverb-like sounds,” he says. “It actually got me thinking about the whole idea of using the environment itself as an instrument in a composition.”

It was a different way of recording for Shepherd, who is more accustomed to creating music in a controlled studio setting. He’s been releasing singles and EPs since 2009, and put out Floating Points’ debut LP, Elaenia, in 2015, to glowing reviews. (Shepherd also co-founded Eglo Records, a London-based house and techno label that has released music by FunkinEven, Fatima, and Steve Spacek.) Improvising a second LP in the California desert in close creative collaboration with the musicians in his band—bassist Susumu Mukai, guitarist Alex Reeves, and drummer Leo Taylor—was the furthest thing from Shepherd’s mind, until it happened.

“Elaenia was definitely a product of me, solitary, making music by myself,” he says. “Up to that point, all the music I’d made was like that. I’d never thought about collaborating with people.” It certainly helped, Shepherd says, that his bandmates are both “exceptionally good musicians” and also close friends. “We have a really strong bond, so it was quite nice to be able to record together like this.”

Now that he’s done it once, Shepherd is keen to try recording again in a different locale. He has in mind a series of recordings that make use of their natural surroundings. “Some of the suggestions have been really interesting, like an old World War II diesel storage in Scotland, this perfectly cylindrical underground thing that has a 30-second reverb time,” Shepherd says. He also mentions potentially exploring the sonic properties of the El Capitan rock formation in Yosemite National Park in north California. “That rock face is incredible,” he says.

Subsequent entries in the Reflections series would also include a visual component, which is exciting for Diaz. “It’s a challenge,” she says. “If you go to a place where you’re not comfortable—because a studio is where you make music or film—you have to open your eyes and your senses and ask, ‘What’s this environment going to give me?’”

For now, Shepherd needs a little space from the album, which is a common reaction to finishing a project for many artists. “I think I’ve proved a concept with this record,” he says. “That’s the big picture for me. I want to do this again, and now that I’ve got time to plan them, we can try to actually think ahead to things we want to do.”

Having time to organize is definitely part of the allure of doing another recording in the same manner, given the technical snafus Floating Points faced. “We were dragging insanely heavy equipment across plains of desert because there was no road access,” Shepherd says, laughing. “Thinking back on it, it was crazy trying to do that, and doing everything by solar power as well. That was quite a challenge because we had a certain amount of time that the batteries would power the amplifiers and cameras and lighting and all that, before the generator kicks in, and the generator makes a lot of noise.”

Then there were the sleeping arrangements. The house they rented was too small to accommodate everyone in the crew of 10, so Shepherd and several others opted to sleep under the stars, within earshot of the coyotes—at least, until daybreak. “As soon as the sun cracks above the boulders and hits you on the head, you’re awake instantly,” Shepherd says. “So I was going to bed at one in the morning and waking up at five and getting right back to work.”