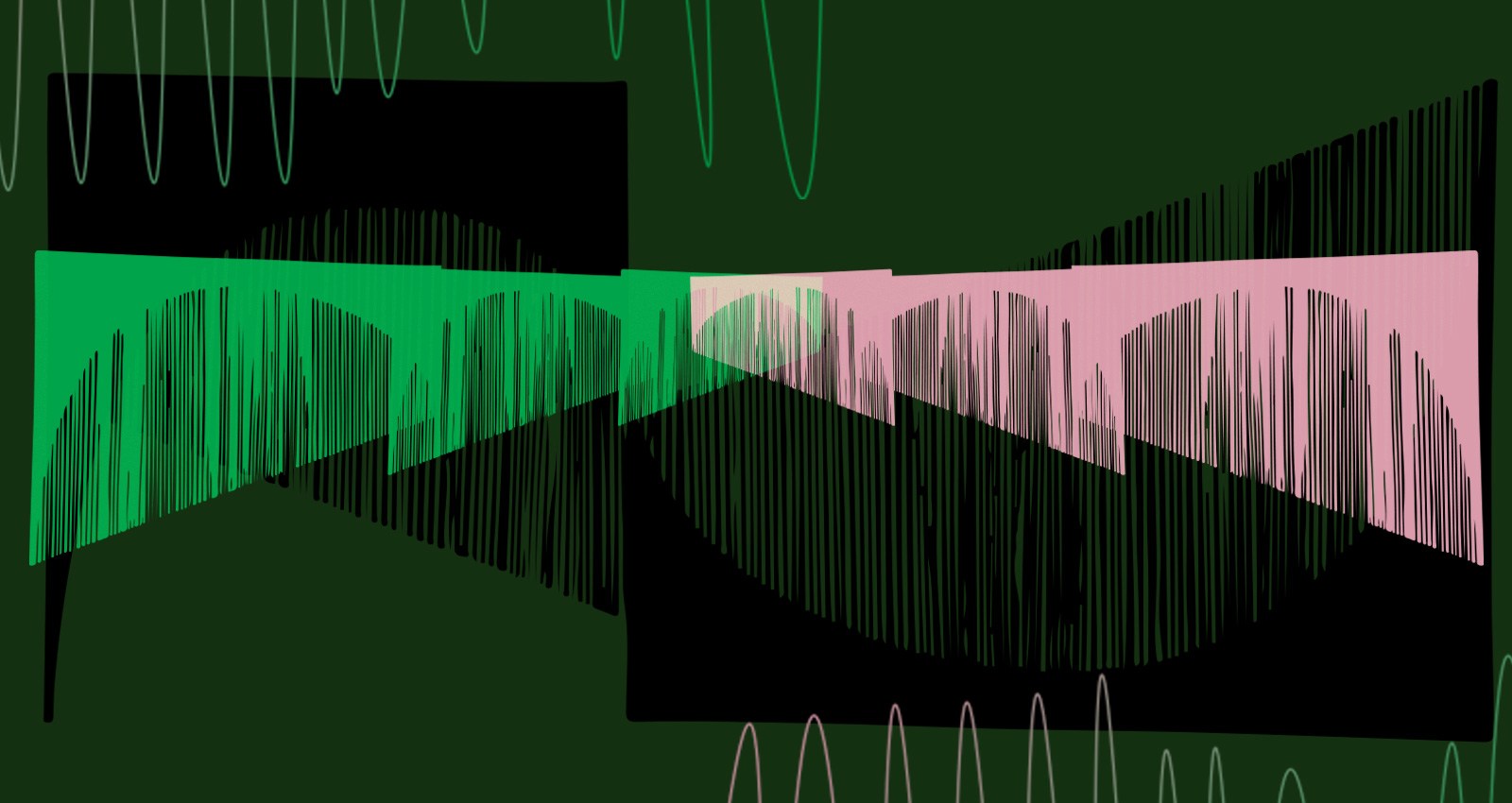 Like the rest of us, the Indianapolis musician Stuart Hyatt, who records as Field Works, has spent the past several weeks in quarantine. As someone who’s spent much of their life carefully listening and documenting the sounds of the world around him, he’s acutely noticing the silence of the outside world. Coincidentally, his new record, recorded long before industrial parts of the world quieted down, Ultrasonic, is similarly—and consciously—consumed by silence.

While recording the source material for Ultrasonic, Hyatt sat alone in fields during the early evening, mostly in absolute quiet, watching a meter pick up sounds he couldn’t hear. He was recording the sounds of the endangered Indiana Bat—more specifically, the echolocation that enables it to perceive the surrounding area. Instead of listening through his own ears, as Hyatt had done for so much of his professional life, he trusted his equipment to do it for him.

The concept for Ultrasonic first came to Hyatt while he was chaperoning his child’s fifth-grade field trip in the Great Smoky Mountains. “We were on a hike with a park ranger one evening, and she gave us this little walkie-talkie-like device,” says Hyatt. “At dusk, we turned them on and pointed them up and started listening to the echolocation of bats. At that exact moment, I knew that it was one of the most mesmerizing things I’ve ever heard. It’s like looking into an alternate reality, a parallel dimension. I knew it was what I wanted to work on next.”

Hyatt compares the act of recording echolocation to taking a photo of an invisible man—looking at the grass to see where the man was stepping, watching the wind for movements. In that analogy, the recording studio was his darkroom; even after applying various effects to make the sounds audible, all he could do was cross his fingers and pray for the result as listenable.

“The strangest part of this, which I have never encountered before, is—even as I’m recording it—I look on my recorder and [see] that I’m picking up a signal on my meter, but I can’t even hear what I’m recording,” he says. “So the next day I go into the studio, transpose all of that using a variety of methods that I had to trial and error and then all of a sudden, you hear it.”

By “it,” Hyatt refers to the otherwise inaudible sounds bats use to hunt for food and survey their surroundings, all staccato blips and piercing squeals. Echolocation boasts a surprisingly diverse dynamic range for a pragmatic evolutionary tool: at some moments, it plays like a synthesizer’s LFO, self-oscillating ad infinitum; or the distinctive fuzz of tape hiss. What we’re left with is a beautiful range of sounds we shouldn’t be able to hear, from an animal humans often associate with darkness, vampirism, and—especially as of late—disease.

To get the project off the ground, Hyatt sought funding from several sources, including National Geographic. What started as a pipe dream, ended up as a partnership where he became an “explorer” for the brand. Among the perks of the sponsorship is expanded access to the company’s headquarters, where Hyatt is free to take classes at no cost with his fellow explorers, many of which are scientists.

“It’s so fun,” Hyatt says. “I love being in the field with experts who have devoted their lives to this incredibly narrow niche. Likewise, they see me out with my gear, geeking out with sounds and thinking, ‘How can we tell this story through music?’ For them, it’s like a whole new way of thinking about their work. I love that interdisciplinary, collaborative spirit.”

After several sessions spent recording the bats, Hyatt began organizing the massive amount of material he had collected. “What I did was break the sounds down into two categories: rhythmic and melodic,” he says. “The rhythmic sounds were these super fluctuating vibrational clicks, and that’s the bat echolocating off different objects. You’ll hear it increase in frequency the closer it gets to [an object]…the melodic sounds, I would liken them to bird song. It just happens to be at pitches way above what we can hear.”

Once he had placed the files into groups, he sent the library to his contributors, a who’s who of modern experimental music that includes Kelly Moran, Felicia Atkinson, Mary Lattimore, Eluvium, Taylor Deupree, Sarah Davachi, and Jefre Cantu-Ledesma, among others. The selection process differs slightly by album, but Hyatt almost always chooses artists who he admires and gives them full rein to compose however they want.

Hyatt’s hands-off approach results in a tapestry of sounds and effects. On “Night vision, it touched my neck,” Felicia Atkinson’s bells and percussion tuck in among the pricks and hisses, blurring the line between her sounds and the ones Hyatt recorded. Taylor Deupree and Jefre Cantu-Ledesma take another approach, using the source material as texture beds, which they lay under other loops and slightly distorted sounds.

“In the whole Field Works series, I’m only doing a small part of the music,” admits Hyatt. “It’s really working with artists and composers I admire and handing them the reins to make their own magic with the sounds I provide…So my only creative task was to sequence the tracks, particularly for vinyl onto these four different sides, so that it was something approaching a cohesive product.”

Recording sounds outside the audible range for humans inspired Hyatt to chart another similar project, this time, recording the subsonic world of seismic activity in Alaska, once again partnered with National Geographic. While the upcoming work is still in development, he still holds close the memory of first hearing the inaudible.

“One would think that having explored the sounds of our planet as deeply as I tried to, I would have thought of echolocation before, and of course I knew what it was and that it was outside the range of human hearing, but I had never taken the time to learn how to listen to bats. That moment really inspired me.”