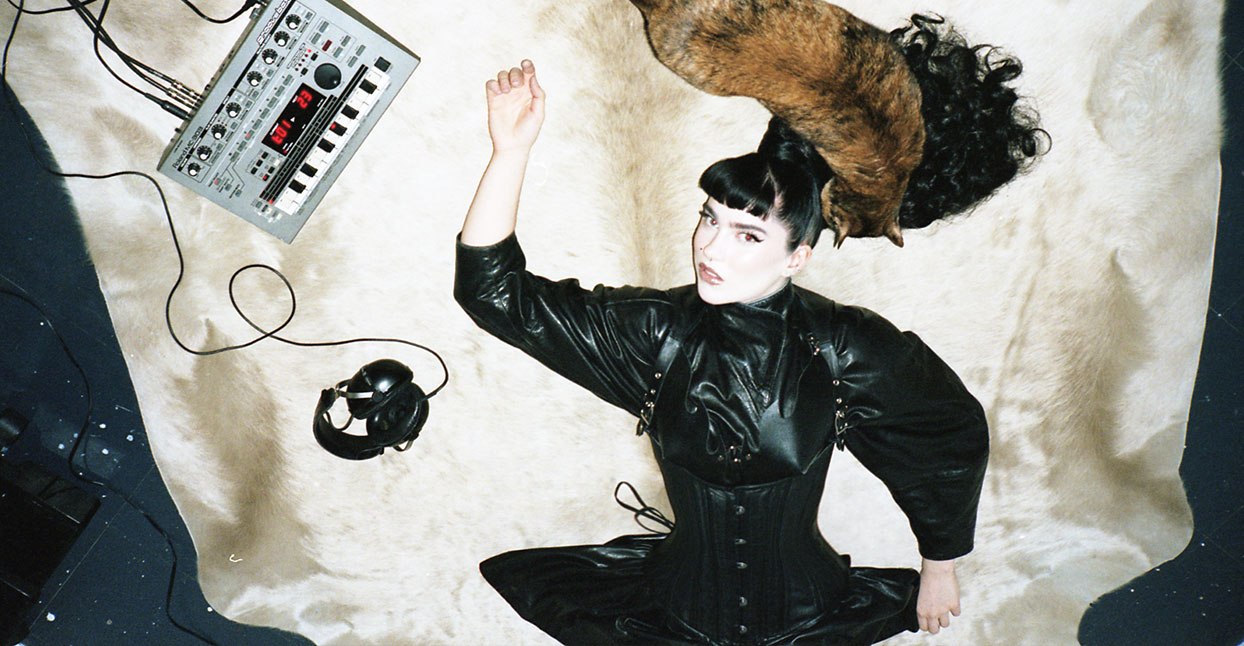 Justina Kairyte is explaining the role of fashion in her dark synth-pop project Fee Lion over coffee at La Catrina Cafe in Chicago, and her love of latex keeps coming up. While the material has long been associated with fetish culture, those implications were not what Kairyte had in mind when she started crafting her look. “When I started introducing glossy vinyl and latex in Fee Lion,” she says, “it was hard to separate the connotation from the material. But I never wanted to hypersexualize Fee Lion. Those materials exist in the fetish world so heavily that it’s hard to separate them from that.” It’s also hard to separate the material from the culture of industrial music—just glance around the room at your next Skinny Puppy concert. And while Fee Lion has never created explicitly “industrial music,” her new EP Blood Sisters fits that descriptor nonetheless. Gone are the guitars that carried early songs like “Circles” or “Ad/Just”—Fee Lion has settled on heavy drum machines, throbbing bass, and synth arpeggios.

Kairyte always wanted to be a performer. “I recently saw a picture from career day at a time when I wanted to be an artist—I was maybe in second grade. I had a white, poofy, frilly shirt, and a painting palette.” It’s a funny image, considering Kairyte’s current work, but there is something prophetic about it nonetheless. Kairyte’s desire to base her life around art (specifically music) was reinforced by her upbringing; growing up in Lithuana, her parents would play Kraftwerk, Tears for Fears, and Depeche Mode records around the house, sparking a life-long love affair with synthpop. (“I loved it,” she says of her parents’ record collection.)

As a child, Kairyte composed songs, danced, and was creative with in her choice of outfits. “I was a very active kid with a big imagination,” she says, “bouncing off the walls, dancing, singing, trying on clothes… Recently we watched some home videos, and I was getting into costumes—it was crazy. I was wearing layers of clothes, taking them off—putting on a dress with overalls on top.” Fashion is as important to Fee Lion as her music, and as the project’s scope and ambition increased, Kairyte’s skill set needed to increase as well. “It’s all about finding a smart, timely way to execute,” she says. These days, her onstage ensemble includes numerous latex outfits, and futuristic dresses with lights woven into the seams. She’s also collaborated with other designers, like Authentic Skid Mark, Alex Ulichny, and Gilles Asquin.

Fee Lion has developed musically as well. Kairyte grew up playing piano, performing in musical theater, and singing; she taught herself guitar in her late teens, before moving on to synthesizers and loop pedals. Guitars, synths, and pedal effects provided project’s foundation, but as Kairyte kept creating, the possibilities of electronic orchestration began opening up new worlds. Case in point: Blood Sisters: “re: (Visit)” is a major update on one of the artist’s earlier numbers, “re:,” a synthpop song which—as with much of the artist’s early catalog—features tight guitars and massive choruses. The new version is cleaner and louder, showcasing Kairyte’s prowess at balancing varied synth parts beneath her dynamic, soulful voice, all while maintaining a huge, catchy hook.

Blood Sisters also features the longest song in Fee Lion’s oeuvre, the electronic behemoth “My Man,” a song that begins with a quiet, tense passage, before bubbling into dark, club-inspired territory replete with Kairyte’s sultry crooning. At one point, the song dips into a quiet, anxious passage, followed by a percussive shout that pushes “My Man” into hypnotic territory. It’s the type of song that shows precisely what Fee Lion is capable of: commanding the dancefloor, and mesmerizing sonically. Considered alongside the artist’s visual aesthetic, it’s hard not to imagine the dance-filled frenzy that will be the Blood Sisters live show. “Everyone’s a freak,” she says simply, “and that’s just how I look at it.”

And while fetish culture fits into her project’s aesthetic, Kairyte adamantly insists that Fee Lion not be pigeonholed as musical kink. “Even though latex is a fetishized material, and my style has become more provocative,” she says, “I’m very aware of how I pair things. I never want to reveal too much. I’m kind of an old soul.” She laughs. “There’s power in sex appeal, but what is most important to me is feeling comfortable. And some days, eight-inch Pleasers and an inflatable latex dress is comfortable to me!”