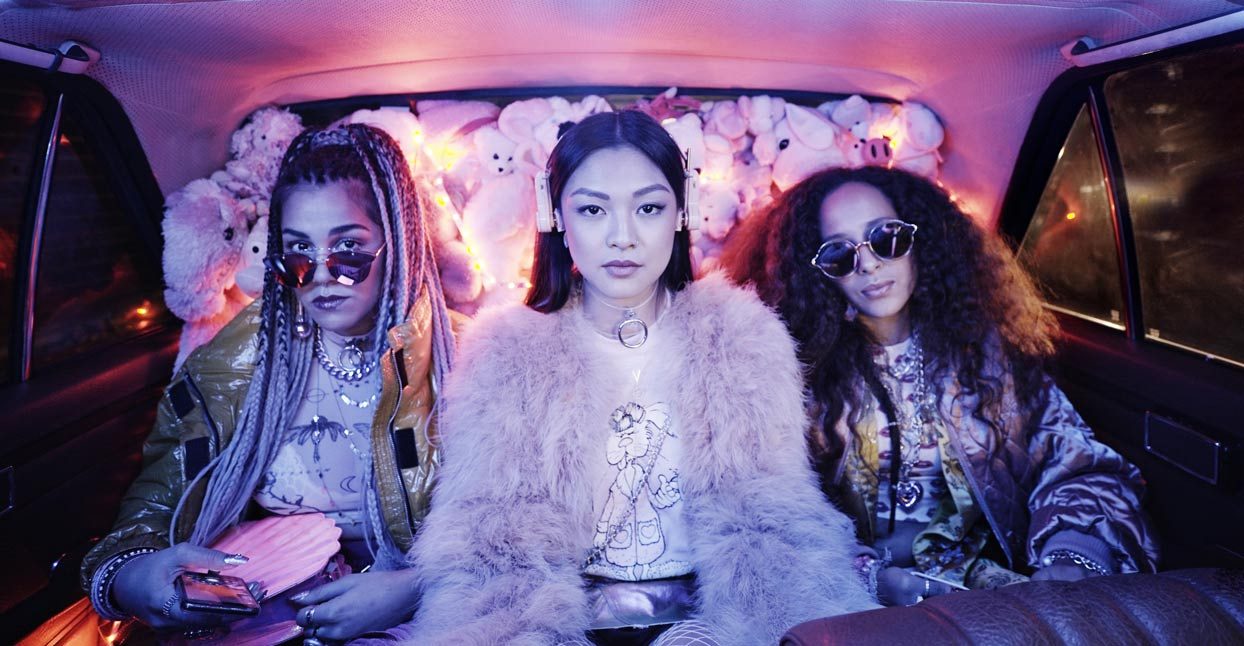 This is what we know about C.O.W. 牛 so far: they’re a group made up of four anonymous members hailing from China and Germany. They create a beguiling, bass-rooted sound that sits somewhere between futuristic beats and classic samplecraft. They’re signed to cult German indie label Compost, and have so far released two EPs since they emerged in 2016. Their live shows are a giddy experience, the entire group playing while wearing pixelated cow masks. They have an obvious penchant for 8-bit games, and their messages are a clever balance of wit, politics, pop culture, and social commentary. We also know that C.O.W. 牛 would like to be seen as a single female entity, and she declines most interviews.

“C.O.W. 牛’s visual and musical images, as well as their social media skills, and also their social critical behavior, are well thought-out,” says Michael Reinboth, DJ, curator, and founder of the 25-year-old Compost label. “Musically, they’re simply fresh and open. They’re not stuck in IDM, trap, downbeat, hip-hop, cold wave, or electro whatever. They’re just great tunes. Visually, they have a strict concept—which is fantastic. Even if they are four guys, they’re dealing with female images because one of their ideals and topics is that women shall and will rule the world for a better one.”

The video for last year’s EP $hanghai Mone¥ is perhaps the most revealing snapshot of C.O.W. 牛’s philosophy and creative identity so far. It’s set a modern-day Western for the iPhone generation, scored by C.O.W. 牛’s combo of sci-fi soul and smoldering low-end beats, and hinting at the idea of consumption disruption and isolation through invasive social technology. While we may not—and may never—know who C.O.W. 牛 is, we are left with little doubt as to what C.O.W. 牛 is all about. Keen to find out more, Bandcamp Daily was granted a rare online interview. The band members wish to remain anonymous, and asked to be represented by the Yin and Yang, the male and female parts of their whole.

Let’s clarify some things; C.O.W. 牛 is comprised of four pixelated parts, but should be seen as one single entity, correct?

Yin: Yes, exactly. C.O.W. 牛 is more one entity than single characters or persons. It is fed through a small bunch of persons with different talents and channels of intuition.

Trying to unravel your identity is missing the point, but is there anything we can know about the sentient beings behind the masks?

Is it right that you began as a Chinese act, but have since found a new spiritual home in Germany? And was this with new members, or have you always had a German connection/roots as well?

Yang: We have roots in China, Germany, America, and the South Pole. The connection happens a lot in Germany these times but spiritually in a lot of places and decades.

Yin: Everything is connected.

You’ve mentioned spiritual connections online before. The cow is a very powerful spiritual symbol for many. Are we right in assuming you’re a spiritual collective? And how does this influence your music?

Yang: Everything and everybody is spiritual, even if they are not aware of the fact that there is no matter without spirit.

Yin: Everything you do is a prayer, even if you do not pray.

Yang: So we cannot say we have a spiritual side in our life, but our life consists of different sides of our spiritual being. Sometimes, the things that appear as the most boring are the portals to a huge inspiration. Like, you wouldn’t expect a cow changing the way the earth looks at herself. Music is a very direct way of experiencing that.

Yin: Letting go of the knowing is what happens when it’s happening.

Another strong influence for C.O.W. 牛  is, obviously, 8-bit games. Tell us about their influence…

Yin: 8-bit games are portals that open up and take us back to when most of our parts were still young and bouncy.

Yang: It’s fascinating what can be formed out of a small amount of very simple shapes. But it is only possible because the observer is as creative as the drawer, or the composer, and the interpretation is such a big part of the communication. Together, they are one creator of reality, and working with simple shapes brings out the essence of what is really worth of sending.

Is this something we’ve perhaps forgotten as technology has accelerated? How much do you think we can learn from older models of technology, and how much of this is nostalgia?

Yang: Like with everything, there’s no separation between this and that, old and new. This is just a concept of the human’s perception to be able to order things and focus. 8-bit is one concept, one idea, or one framework in the continuous flow of development you call technology. When you do art, there’s no separation between the observer and art itself.

Like the Kōan says: ‘If there’s 8-bit art in the internet and nobody is watching, is it nostalgia?’ This just depends who is watching and feeling the art, and who is taking it out of its surrounding and putting it into his concept of perception.

I’m sure composers such as Koji Kondo and Hirokazu Tanaka have had and their influence on the C.O.W. 牛 vocabulary. These talented musicians soundtracked so many of our childhoods, but they’re seldom namechecked by artists.

Yin: In the work of Hirokazu Tanaka you see an almost perfect reduction to melody and harmonics that really stay and work with the listener for decades, even if the medium is the cheapest sound you can imagine. And you are very right to namecheck them, because their work is so imprinted in the collective consciousness of our generation and our music.

Yang: We like to be a door between the world of 8-bits and the high-resolution world of quantum mechanics.

If you could spend the rest of your days inside the reality of one game, which would it be?

Yang: We are all game inventors, everybody is.

You seem to have a strong sense of fun and humor. Electronic music seems like it’s perpetually teetering on the edge of taking itself too seriously. Would you agree?

Yin: Everybody is funny, but not everybody is aware of it. That doesn’t matter, because there might be someone else who’s aware of it, and laughing. That’s what is important. Laughing is very important. Very serious, too. Seriousness is very funny sometimes. 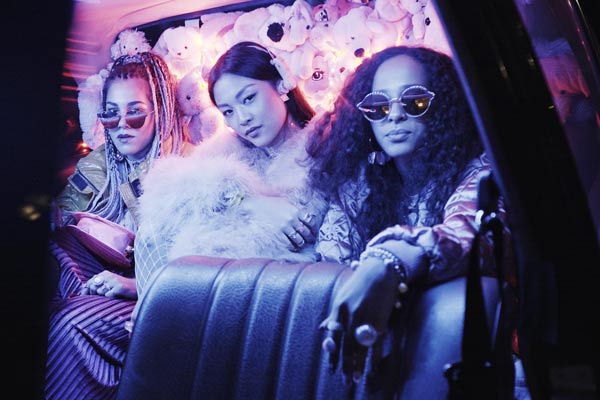 It’s also about contrast, too. There’s a political theme in videos like $hanghai Mone¥. Are you politically motivated, and how important is it for you to make these statements and provoke thought and discussion?

Yin: You are very smart. It’s complicated to answer all these questions at once, so let us try some answers. Without contrast, there is no playground to train your love. Balance is a point of view between all this imbalanced movement. We are motivated by love. Politics is often motivated by fear.

Yin: And destructive energy that wants to be loved. And all the struggle with all the wanting.

We need to discuss your music. There are many ingredients in the melting pot—hip-hop, trap, wave, jazz, bass music, soul, beats. This ‘melting pot’ aspect is important, right? But where does it start? And what are the core or root note elements?

Yin: It is a circling and spiraling kind of thing. We reached a point where musical genres do not exist in a timeline anymore. We lost ours in this project. It’s circling very fast. We are all producers, but we are all instrumentalists, too.

Yang: And no chicken or egg was first. Maybe we can explain with a cooking analogy: A cook is usually not known for his ingredients, but for his arrangements with various ingredients. Nowadays a cook even can mix various styles and traditions of different national cooking and still maintain a way of presenting and treating food that is very unique, because he has a unique combination of skills and taste that grows everyday. But it’s always about the menu that is available in the moment.

Has this changed as you’ve performed more live shows?

Yin: We have four sets of skills that grow simultaneously on every show we play and everything we experience in the parallel universes we travel.

Yang: The menu is a combination of what happens right now and what we like in the moment.

How do the live shows work?

Yin: The kitchen at our last show had two synths, two Abeltons with controllers, and a set of MIDI drum pads. It changes from kitchen to kitchen, but we have a piano cow, a guitar and bass cow, two drum cow and four DJ cow.

So what comes next?

Yin: We know we have lots of energy circling around us but just decide from moment to moment what music, videos and art we manifest and what we just let go for good. But right now, we just feel like doing lots of music.