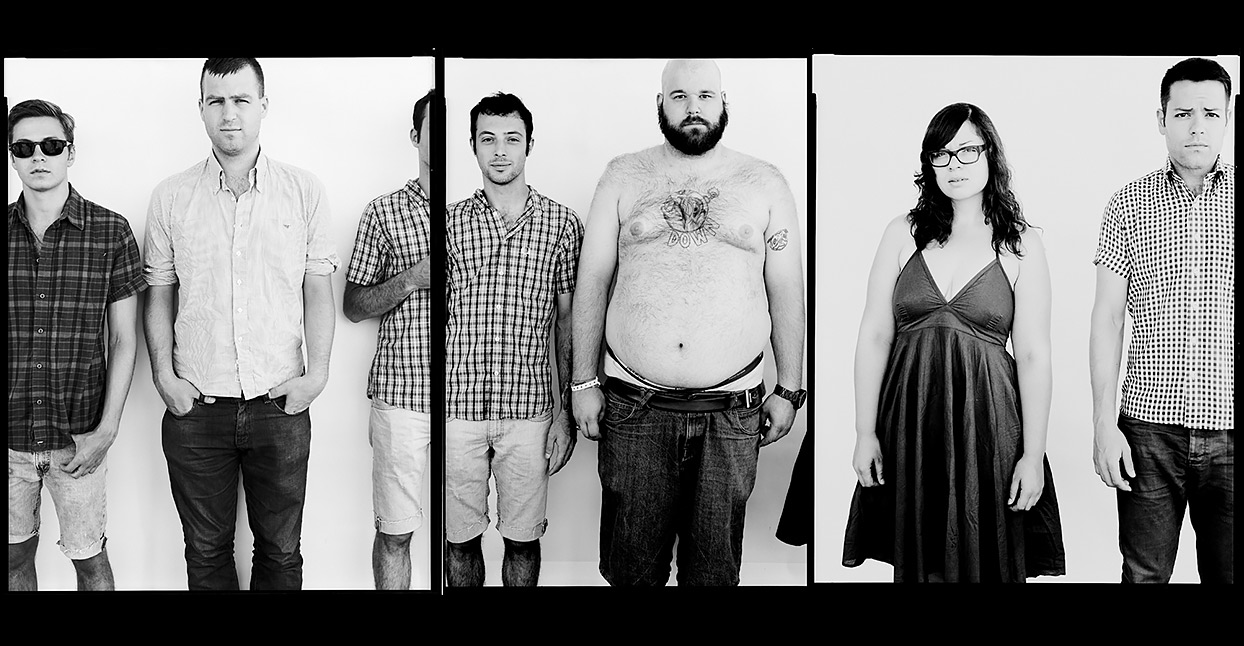 Toronto’s Fucked Up have always seemed volatile—from their controversial band name, to the public discussion of interpersonal conflicts, to their close ties to a punk lineage in which bands break up and become myth. Yet after 15 years of existence, they’ve outlasted everyone’s expectations. The band is beginning to feel like an institution, whether it’s through guitarist Josh Zucker’s guiding hand in their Toronto-based Long Winter concert series, or their members’ personal projects—Jonah Falco’s work with Career Suicide, Ben Cook’s solo persona Young Governor, and Damian “Pink Eyes” Abraham’s Turned Out A Punk podcast & pot advocacy.

If you like their Bandcamp page, you have bassist Sandy Miranda to thank for its design and upkeep. As we’ve become obsessed with the single This Mother Forever/Our Own Blood, guitarist Mike Haliechuk and drummer Jonah Falco—the pair responsible for the bulk of these two songs—answered our queries about the single (and their recent Hidden World anniversary shows, and many other matters) via email.

At the time of writing, Fucked Up is set to have survived four U.S. presidential campaigns. In some ways, it seems the band has mutated greatly over the course of your career, but the core has remained the same. Do you think the longevity of FU has to do with your willingness to collaborate with others regularly? Does it feel like a blood transfusion of sorts?

Mike Haliechuk: I think it’s … more stubbornness. I’m really stubborn, and there have been several times over the years when people want to pack it in, or take a break or whatever and I just pushed it through. Then once you get past like 10 years of being a band, you kind of cross the Rubicon, and breaking up doesn’t really make sense, so you just keep going. It’s like all the arguing and craziness wasn’t worth anything if you are just gonna break up after a decade or whatever. Plus FU has never got to the point where we’re just putting out the same old record over and over; we’re still always sounding different and trying new things.

Jonah Falco: The longevity feels less like Keith Richards’ blood transfusions and more like Lemmy’s lack thereof. Any other influence (beyond learning an evolving style) and either they, we, or both, would die.

How did “This Mother Forever” and “Our Own Blood” become the songs they are? And why did you pair them together?

Haliechuk: Those were recorded kind of on a break during another session, I think Year of the Snake. So those happened just because there was this piece of gear we’d never used leftover from someone else’s session—a MiniBrute, which is good for making these small repeating tones and arpeggios—so we would just fuck around with it and make a cool sounding thing, and then from there we just wrote the music of those two songs just out of nowhere. I was going through some shit at the time and needed a bit of a release, which is what “[Our Own] Blood” is—just me doing a 30-minute long take in a closed room, freaking out, same with Jonah separately on his percussion track. But yeah, we’re at the point now where we’ve done a few solid guitar records, so we’re trying new gear.

When you write lyrics, do you hear them in the voice of the song’s vocalist? Do you write them as “Mike” or do you attempt to embody the person who will be singing? Does the first line of “This Mother Forever” (“I am the song/ and you are the singer”) basically sum up your take on it?

Haliechuk: I rarely write lyrics that are about me, or an issue I’m going through, so there really isn’t a ‘voice.’ [The lyrics] are about plants or patterns … or aphorisms. Plus we don’t write lyrics for melodies, so they always come last in the process. The ‘Mother’ lines aren’t really about anything to do with writing; they are just a tribute to ‘mother’ energy or like, moms.

What are the themes present in those songs?

Haliechuk: I think it’s pretty obvious—“Mother” is about celebrating where you come from, where everything comes from. “Blood” has no lyrics, but it’s about release.

These tracks bring to mind your “Year Of The…” series—they’re atmospheric, have a rise and fall to them and almost feels like they breathe. Especially “Our Own Blood,” thanks to Tanya Tagaq’s vocals. How familiar were you with her before asking her on the song? Did you direct her at all or let her do what she wanted on the track?

Haliechuk: I had seen her a few times, and knew she was into hard music. We had a formula for doing takes on that song, so we just told her that—‘Do it in one take, try to release some bad energy into the take, and then don’t listen to the song again after you are finished with it.’ She is a [natural] improviser, so anything she came up with was gonna work.

How do you select collaborators?

Falco: There isn’t really a firm method as far as I know. Just a bit of quick thinking or fit for purpose style decision making.

How big of a part was improvisation in the composing of these songs and when did the band become comfortable improvising? When did you develop a shared musical language? Do you have one?

Haliechuk: “Blood” is all improvised, but “This Mother Forever” was kind of just written factory style. We happened upon a cool tone, the one that starts the song, and then we just riffed over that until we had a song, built in pieces all in the studio. FU doesn’t improvise and lately we don’t really ‘write’ music—the last few things have just been me and Jonah fucking around in the studio with the record button on, and then we arrange pieces into songs on Pro Tools.

How did it feel playing through the Hidden World album all the way through in London?

Haliechuk: The London show was OK, but we’ve done the set like 10-ish times now. It feels weird and it’s very long.

Falco: Performing [Hidden World] live had been great—conquering exhaustion and shedding the mundane ritual of “covering the bases” that we normally do in a set. It’s also been rigid though, to follow the specific guidelines of the album.

What are the next steps for the band?

Haliechuk: Working on a new album, gonna do more Hidden World shows through the winter, we’ve got Year of the Snake coming out in the spring. More singles.

Mike, I just watched an interview where you said that after a band has existed for 10 years, you can see it existing for 50 more. Any guesses what you might be playing in 30 years?

Haliechuk: Probably the same clubs we play in now.