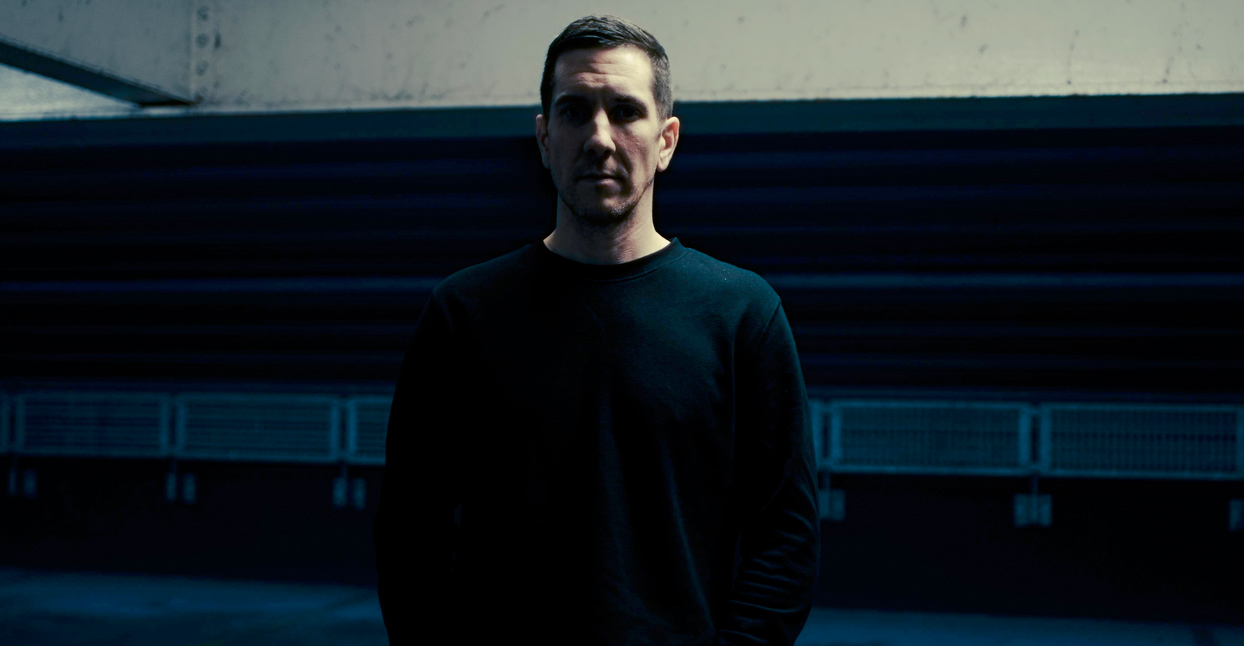 If you’ve poked around the experimental fringes of drum & bass over the last 20 years, you’ve likely been exposed to the music of Damon Kirkham.

Maybe it was as far back as 1999, when Kirkham and Alex Boddika launched their Instra:Mental project. The dup catapulted into the genre with a series of strong and caustic tracks. Their earliest releases were penned with Source:Direct, one of the roughest jewels on Goldie’s label, Metalheadz. After a brief hiatus, during which they infamously partied away their royalties, Instra:Mental returned in the mid ’00s. This time, they pushed a deeper sound, and an aesthetic that challenged some of drum & bass’s strongest cliches. A far cry from the “louder-faster-heavier-badder” attitude held by many artists at the time, Instra:Mental’s relaxed, nuanced approach caused them to be regarded as one the most progressive and influential underground drum & bass acts of the era.

Or perhaps you first heard Kirkham several years later, when he was part of the Autonomic movement of the late 2000s/early 2010s. Spearheaded by Damon and Exit bossman dBridge, that spacious sci-fi soul is cited as one of the genre’s most influential movements, breaking down previously rigid barriers and encouraging experiments from non-genre artists like James Blake and Actress.

There are plenty of other ways you may have become acquainted with Kirkham: The grainy, physical techno of his Jon Convex project; the woozy soul of his work as Mikarma; the rolling drum & bass of Kid Drama; or the many collaborations and groups he’s part of, including Heartdrive, Module Eight, and Binary Collective. This year, Kirkham’s opted for a bit more anonymity, penning beats for Danish autonomic newcomer, Alia Fresco.

It’s important to acknowledge that Kirkham’s various aliases and projects are rarely one-offs. Most of them have a specific style, story, and set of imagery. And these are just the projects we know about; according to legend (and Kirkham himself) there are many more anonymous projects still waiting to be discovered.

And what of the real Damon Kirkham? For a man who’s revealed so many sides to his soul through his uncompromised, consistently forward-thinking music, he gives away little of himself without request. An internet citizen who prefers subtlety, Kirkham refuses to employ viral tactics to get attention. He won’t Tweet every move he makes, or every meal he eats. But sit him down IRL and you’ll find he’s frank, honest, and brutally real about electronic music, and the darker side of the industry underbelly.

How are you and where are you?

Where I always am: In front of my computer, in my own little world, dangerously getting lost in my own thoughts. But things are okay. Anxiety and depression have been a challenge, but there’s a lot of positivity. I’m learning not to be so precious about my music. I’ve been like an overprotective parent in the past, but I’m learning to let the birds fly free. Don’t worry about where it’s going to go or how it’s going to be marketed, or any of that bollocks. Just focus on the music I want to make and either release it myself, or send it to labels I love. Basically, I’m trying to play the game, but to do so without all the outrageous online bullshit other people seem to do.

That seems to be consistent, no matter what alias or project you’re working under. You love making music, but hate doing business. Is that right?

I’m such a shit businessman! Especially now that we’ve gone beyond the standard things you’ve always had to do, like bookkeeping and a little bit of self-promotion. Now, people are going to such extremes to put their music in your face, it’s cringeworthy.

You’re not going to name names, are you?

I would love to blow the roof off this! The shit you see as an artist behind the scenes is ridiculous. But no, of course I’m not, because I value my occupation. It’s attitudes, man. People jumping on ideas and copying sounds. You have to be so careful. I love talking about music and ideas with other musicians. I could do it all day. But tell the wrong guy an idea one minute, and the next minute they’ve done it—they’ve put up a video or a comment about it, and everyone’s going mad for them.

Those are the type of tactics you’d expect in the corporate or political sectors.

It is like the corporate world. I guess it’s the same model of behavior in any sector where there’s competition. For everyone who’s making this music full time, it’s cutthroat, because everyone is after the same thing. I’ve learnt to keep my head down, deal with only people I trust, not get in any online bullshit, and just make music.

You’re right about the guys who don’t do it full time—there’s less pressure to convert creativity into an income. It remains a labor of love.

They’re the most grounded people in the scene. They understand the preciousness of time, having to balance a job, maybe a family, and write music and DJ. So they use the time they have, and they don’t get so lost in their own heads or arses.

You’ve been in this since you were 17. Have you ever had a ‘proper job’?

Loads! Laboring, gardening, call centers. I sold bathrooms for years. I worked in a video shop for years, too. My mother ran it. Me and Alex Boddika would watch every single video that came in. You can hear it all in the music—all the wonkiness and graininess. We soaked it all in without realizing. When we finally did do creative stuff, it came pouring out. All these influences. Even down to playing on the arcade machines we had in the shop. All the 8-bit sounds, all those chewed-up tapes and blips in the films.

Akira was huge at that time. In fact, Japan seems to turn up a lot throughout a lot of your aliases and projects. Is that where that thread takes root?

Yeah, I’ve been obsessed with Japanese culture since Akira. Every time I saw footage of Japan, it would enthrall me. Tokyo is such a sci-fi city. Images from Blade Runner are hard to shift. This was all pre-internet, when we had to wait to find things out. We’d have to find books and look out for documentaries and really dig for things. By the time the internet came into our lives, I’d long since aspired to know everything about Japan—anime, especially. It paints a dystopian cyberpunk ideology that I relate to. I’d also studied Japanese in night college. For a while, I was considering living there.

Home was in Sydney for a long time, I was married to an Australian who I was on the brink of giving up music for, but things changed, and it didn’t work out. I went through a long depression and wrote the Mikarma album through a haze of sedatives and eventually moved back to my mother’s house. It was a fucked-up time.

I’d written the Jon Convex album, and instead of touring with it, I ping-ponged between countries for a long time, and didn’t give the music my full attention. Love was destructive to my career, but I wouldn’t change it, life experiences and chapters are all part of who and where I am today.

It makes you who you are.

In ways you’ll never know. I know people who coast through life and have never suffered any loss. They’ve never hit the bottom of the barrel and crawled back out of it. I think you need these jolts to help you respect your art and appreciate life. It’s that mortality check. I’ve had a lot of people close to me die. I know death—he scares me. Death doesn’t give a shit about how much money or status or how many followers you have on Twitter. Knowing this keeps your perspective in check.

You lost very close people at a young age, didn’t you?

Yeah. My dad died when I was 13, and my best friend died when I was 17. These events happened at potent times in my life, and they changed me forever. But also love, too—losing love is like death. Having a passion that you’re ready to put everything on the line for, it blinds you! Everything in life leads you to a certain point.

So each alias reflects your mindstate at that time. Where were you, mentally, during the peak of Instra:Mental?

Not the best place. There was a lot of drink and drugs, and we experienced a lot of hype. We’d broken boundaries between many insular genres. It was a rare moment in time, and was very exciting. But eventually we found we were becoming surrounded by yes men. And we realized a lot of people had jumped on our sound. It got to the point where we felt we were over-saturating ourselves.

Is over-saturation the reason you started a new alias?

Yeah. Basically, I get bored and want to try new things and develop. For instance: recently, I dug out an old EMU sampler and gave it a new hard drive and fan and started making all these old Virus-esque basslines. Just so I could understand the techniques that blew my mind back in the day. It was the same feeling I got when I listened to Autechre, Boards Of Canada and Aphex Twin. I had no idea how these sounds were being made.

Are there any things that blow your mind now, or are all of the illusions shattered?

Most are shattered. I know what’s a sample, I can hear things and know what type of synth is used. I’m mentally breaking down the process.

Does that ruin your life as a music lover?

For music to blow me away, it has to be music that I can’t make. Atlanta trap is one, actually. Kids like Lil Uzi Vert and Lil Yachty. Their songs are catchy, warped, and slurred. It’s a fusion of hip-hop, trap, weird autotuned stuff. It’s refreshing they’re not going on about killing people or having gold. They’ve come from shitty places, but they’re not rapping about it or glamorizing it. I respect that.

I guess musically you can hear influences. Those trappy hats and elements in the Alia Fresco music didn’t come from nowhere, I guess.

Alia’s EP was a great way to start the year. Are we going to hear more behind-the-scenes production from you in future?

Maybe. I love working on something with someone and creating something that wouldn’t exist otherwise. Alia was a joy. Her ideas and input shaped the song and took me in different directions. I no longer listen to it as something I’ve made–it’s bigger than that. So productions like that are definitely on the cards.

Are these projects you’re not yet ready to reveal?

It’s stuff I may never reveal. Not everything needs to be revealed! That’s why I never give tracklists for sets, because people judge a record differently the second they know they’re listening to a particular person. The same record will get a different approach if you said it was by DJ Percy from Brighton or by dBridge. So not giving the tracklist away means people have to make up their own minds. Not an easy thing for some people to do these days…

Is killing off an alias an easy thing to do?

Oh yeah, that’s very easy. They’re chapters, like everything. And some chapters are best left closed. Every alias is a different time and mindset. Instra:Mental—I was a different person back then, and in a different place. Alex was, too. So, I wouldn’t go back to that. That’s not to say Alex and I won’t make music again. It just won’t be as Instra:Mental. The same with Jon Convex—it’s a chapter that’s done and dusted. I’m on a new path. Don’t taint what you’ve achieved in a particular moment. Create a new moment instead.