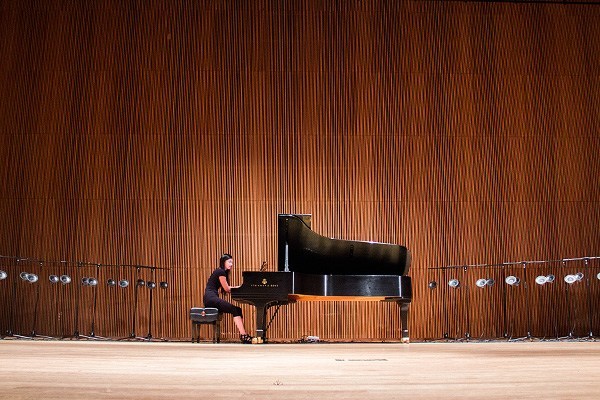 “We lose ourselves in the groove, letting the bright sounds wash over our ears. But not all minimalism is idyllic.”

Listening to pianist Vicky Chow blaze through Tristan Perich’s Surface Image, one is tempted to cry “Minimalism!” After all, we’re dealing with a sonic landscape not all that distinct from the music of Philip Glass, Steve Reich, La Monte Young, and Terry Riley. With its overlapping patterns, static harmonies, and relentless repetition—not to mention its unbroken, hour-plus length—Surface Image might easily be seen as a 21st-century companion to the minimalist classics of the 1960s.

Perich’s work investigates the sonic attributes of 1-bit music, whose low-fi quality trumps even the already low-fi, old-school video game sounds of chiptune (see: Anamanaguchi). In Surface Image, Chow’s unyielding piano is backed by forty hand-built speakers that intermittently blast bursts of 1-bit accompaniment. But even here, there are resonances with minimalism: the reedy timbre of the electronics weirdly resembles the looping saxophones of early Terry Riley or La Monte Young.

These days, every year seems like a landmark for minimalism. If it isn’t a celebration of a major milestone—in November, the 50th anniversary of Riley’s In C; next year, Riley’s and Young’s 80th birthdays—then it’s a Carnegie Hall premiere of a big, new Reich or Glass work. And with every concert or record, the music industry reminds us that Reich listens to Radiohead, Glass worked with Brian Eno, Young’s drones influenced the Velvet Underground, and Riley inspired The Who. The hyperbole surrounding minimalism is that it’s the rare experimental moment in American music that has close ties to the rock world.

That pop culture focus, however, often obscures the expanse of sounds that minimalism has encompassed. A number of recent releases available on Bandcamp—including Perich and Chow’s new album, out this week on New Amsterdam—opens up one’s ears to minimalisms that extend beyond the oft-cited quartet of Young, Riley, Glass, and Reich.

In case you’re not familiar with those pioneering composers, an excellent new recording of Reich’s New York Counterpoint by clarinetist James Falzone is a great way to dive into the sound of classic minimalism. Listen to how the musical lines fall gradually in and out of sync, producing waves of resonant harmony—a development on Reich’s phasing technique.

It’s easy to bliss out to New York Counterpoint, and that’s the case with much minimalist music; we lose ourselves in the groove, letting the bright sounds wash over our ears. But not all minimalism is idyllic. In the 1960s, shaped by the minimalist visual aesthetic of Robert Morris and Donald Judd, Reich and Glass focused on process-oriented work—setting up chains of musical events and letting them unfold over several hours. But both composers eventually abandoned those forms of experimentation for more tightly crafted musical narratives.

Composer Tom Johnson, best known for his seminal Village Voice music criticism, has maintained a commitment to the experimental edge of early minimalism, forsaking sweet sounds in favor of harsh patterns. A new album on Parlour Tapes+ by flutist Tim Munro includes Johnson’s Counting Duets, in which voices shout numbers in tightly woven patterns. Munro’s plainspoken but aggressive counting reflects a more abrasive kind of process, minimalism as maddening rather than blissful. (One is reminded of the famous story of an audience member, during a Carnegie Hall performance of Reich’s severe Four Organs, yelling “All right, I’ll confess!”)

Several years ago, Johnson—based in Paris since the 1980s—visited Kansas City for a conference sponsored by the Society for Minimalist Music. In a keynote lecture, the composer was surprisingly dismissive of the direction that American minimalism had taken in recent decades (he shrugged off Adams’s Nixon in China, one of the masterworks of minimalist-inflected composition). Instead, Johnson offered up an alternative strain of minimalism: that of the Wandelweiser collective. This loose international grouping of composers takes after John Cage and Christian Wolff’s midcentury explorations of silence. For Wandelweiser, minimalism represents a minimal use of sound rather than a minimal use of materials (rare is the silent moment in the music of Reich and Glass). Pianist R. Andrew Lee, who attended Johnson’s Kansas City lecture, has since become an advocate for Wandelweiser on the label Irritable Hedgehog. (I should note that I write liner notes for Lee’s albums.) On his most recent recording of piano works by composer Jürg Frey, we hear stillness interrupted, repetition thwarted: minimalism as minor acts of sonic violence against a listener lulled by its expansiveness.

Lee has committed to eroding conventional definitions of minimalism by performing works by composers like Frey and his colleague Eva-Maria Houben. He also recently commissioned a new work from composer Randy Gibson, who heads the Avant Media series in New York and is one of the few disciples of the famously reclusive La Monte Young. Young’s groundbreaking, drone-based works of the early ’60s set the stage for Riley and the rest. A 2011 recording of Gibson’s quicksilver Aqua Madora, played on just intonation piano and sine waves, captures his work with Young, with music rooted in Rāga and drones.

A similar austerity reigns in Fly By Night, a recent album from Adrian Knight. One can hear the ties between minimalism and ambient music—formalized by Brian Eno in his 1978 Music for Airports—played out as moody, ethereal clouds of sound.

And there are, of course, many composers today who harness just a smidgen of the rigor of minimalism and redirect it toward other goals. In Judah Adashi’s my heart comes undone, a reimagining of a Björk song inflected by the Estonian minimalism of Arvo Pärt, Lavena Johanson’s cello is looped to create an impassioned soliloquy.

Eve Beglarian’s Until It Blazes—released on an excellent album by guitarist Giacomo Fiore—is another example of riveting postminimalism. There is a nervous jitter to Beglarian’s processed music, which gradually accrues little strumming riffs that play off each other. Its restraint feels constantly on the edge of explosion—an explosion that finally occurs in the final seconds of the work. Much of the success here, as with Chow’s and Lee’s recordings, lies with the virtuosity of the performer, who balances clarity with a sense of vastness.

The mournful, abstract cello and vocals of musician Hildur Guðnadóttir—whose latest, Saman, came out in June—offer a perhaps unlikely companion to the repetitive sentiment of Beglarian and Adashi. With plaintive vocals sung atop a droning cello, and a polyphony of still and moving lines, the song “Heyr Himnasmiður” resembles, if anything, the minimalists of medieval music. I have no idea whether this falls under any conception of minimalism as discussed above; I just really like it.