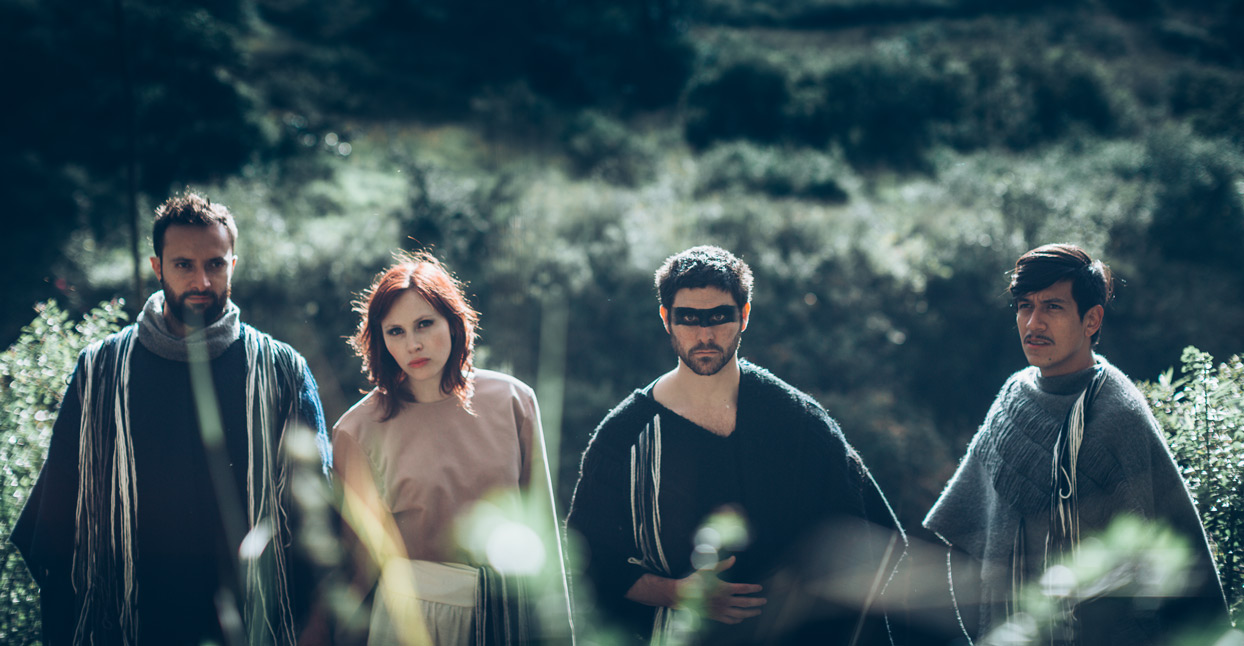 Ecuadorian music has taken great leaps onto the world stage over the past few years. Projects from international touring artists like Nicola Cruz and Mateo Kingman have put the traditional music of two distinct regions—the Ecuadorean Andes and the Amazon—on the radars of Latin American music lovers, opening the doors for them to further explore this lesser-known world of sound. Their success has also opened the doors for younger Ecuadorian musicians to begin discovering their own musical heritage, and the possibilities for experimentation it contains, blending traditional music with contemporary genres like hip-hop, rock, and electronic. Both artists emphasize subtlety and responsibility, immersing themselves in the folklore they grew up with and then reshaping it—using tools like synthesizers, plug-ins, pedals, and looping—to bring ancient traditions into the future.

EVHA is another one of the groups to emerge from the newly galvanized music scene in the Ecuadorian capital of Quito. It’s the city where the five members of the group—Renata Nieto, Martín Calderón, Alejandro Mendoza, Sebastián Schmiedl, and Mateo Kingman—met, and began a quest to, as they put it, achieve a deeper understanding of Ecuadorian music and folklore. Their mission is to encourage conversation about the preservation of their heritage, and to get people excited about Ecuadorian music. To achieve those goals, EVHA is combining the sound of electronic music with instruments from every region of the country.

“Ecuador has three main regions: Sierra, Costa, and Oriente,” Nieto explains. The regions, roughly translated to the mountain, the coast, and the West, have distinct musical influences, the result of old migration patterns. “The Sierra is mostly indigenous, and the Costa has more of an Afro influence, so what we do is mix all the different genres. We use all of those rhythmic patterns in our beats. Sometimes we substitute them with electronic sonorities. We also base a lot of our vocals on traditional melodies—the melodies that populate the rituals and the popular music that people listen to every day in these towns.”

“We all wanted to explore something different,” Mendoza adds. “That’s how the project became so experimental, with us trying to blend all these genres. We don’t want to replicate them. We mix a yaraví with a sanjuanito, or a bambuco. [Our sound] is a consequence of what we have been exploring together.”

This exploration, which has expanded during the three years that the group has been together, crystallized on their debut album, El Viejo Hombre de los Andes. Across 13 tracks, the group uses mainly Afro-Ecuadorian percussion—the bomba drum from the El Chota region, the Andean bombo, a shaker made out of gadua cane called the cununo—to create a sound that aims to replicate the rich fabric of Ecuadorian folklore. Through a clever use of synthesizers and specialized plug-ins developed through a partnership with Native Instruments, EVHA sample, loop, and emulate traditional melodies to create entrancing, beat-driven tracks that explore everything from unrequited love to visions of the jungle, medicinal rituals, the impact of mining in the region, and a generalized preoccupation for the state of nature. Each of the songs blends with one another to create a unified narrative—a slice of Ecuadorian life.

“Most of us lived in small provinces or in rural towns, very close to nature and to rural Ecuadorian culture,” Nieto explains. “In a way, all the themes explored on the record go back to our experiences in the country, the things we experienced as children. Through our music and the sonorities we use, we’re trying to recreate the different landscapes of Ecuador. Some of the songs also have to do with Ayahuasca rituals, because Mateo [Kingman] is involved in that, and he talks about his visions and the spiritual aspect of the rituals. That’s why some of the lyrics are very abstract and sometimes hard to understand.”

According to Nieto, returning to cultural roots has become a phenomenon in Ecuadorian art and music, with a growing number of artists seeking to fuse the folkloric with the contemporary. That connection leads to revelations, whether it be about the artists themselves, or about pressing social issues in the country, like the environmental crisis that legal and illegal mining has wreaked on Ecuador and other parts of South America. The song “Sahino de Plata” explores this theme.

“This is the most upfront, environmentalist song on the album,” Mendoza says. “The voice that is looped [in the beginning] is of an indigenous shaman expressing himself about our environmental problems. We feel a moral responsibility to contribute, however we can, to create conscience about what is happening here.”

“It feels violent, but it’s because we’re not speaking from the perspective of the victim. We’re speaking about how or what he [the exploiter] might be thinking about all the things that he’s doing,” Nieto adds.

One of the most striking songs on the record, “Uiuí,” is a prime example of EVHA’s achievements in uniting several different musical traditions in their sound. The only love song on the album, the track is, according to Mendoza, “a mash-up of Ecuadorean genres.” “It’s based on the cantos montuvios, from of the regions of the Ecuadorean coast,” Nieto explains. “The main rhythm is an Afro-influenced bambuco, but there are others layered on top. There is a synthesizer emulating marimba sonorities, an instrument that is used here a lot. The track is like a drama about an unrequited love.” The record also features the song “El Loco Juan Carabina,” an homage to the famed Venezuelan singer, Simón Díaz, who has not only had a big influence on Ecuadorian music, but also on the band and, specifically, Kingman.

On El Viejo Hombre de los Andes, EVHA offer listeners a deeply-nuanced perspective on Ecuadorian culture—one that celebrates every aspect of the country’s folklore, from the Pacific coast to the Amazonian jungle, and adds new colors, sights, and sounds to a music that was, as they say, stuck in tradition. Throughout our conversation, most of the band members emphasized their desire to use their music to encourage Ecuadorians to be proud of their heritage, and to share that pride in real, proactive ways. At their live shows, they’ve seen both teenagers and older adults latch onto different elements of their music—either the folkloric or the electronic—and they’ve heard renewed debates between musicians and academics on how to move Ecuadorian music forward.

Because the need for innovation is contagious, they’ve also seen a new interest in the revival of the contemporary Ecuadorian music scene, one that was squashed by the entry of the American and European major labels in the 1950s. “In the last few years I’ve seen a lot of people forming projects and taking their music to the international stage,” Calderón says. “What I’m seeing is a scene trying to consolidate itself, but that is still a bit nonexistent. In Ecuador, there isn’t a developed national music industry, there’s no support for the arts—there is no mechanism to develop projects that have international reach. But even then, you can now see self-released projects, people doing crowdfunding, funding themselves any way they can or applying to national and international competitions. That’s how we did it: we applied to contests sponsored by the city, we fundraised for our video, to produce the album, to master it… anything we need to do, we’ll do it. I think every band is doing it this way, and I’ve started to see quite a few bands making important leaps in different genres. There’s a lot of growth and, hopefully, we’re expecting more.”