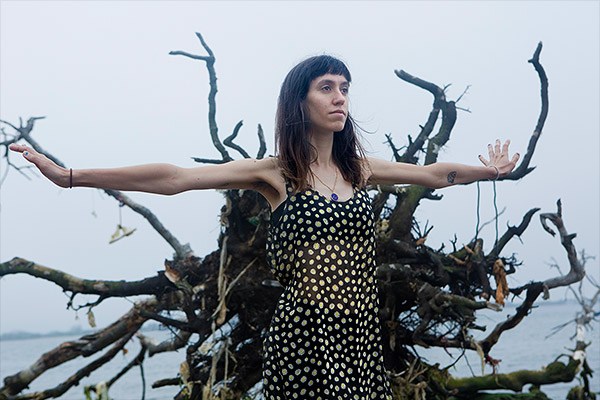 “It’s always really exciting  when there are things that just happen to rhyme, and I tend to stretch what I think are the limits of rhyme.”—Gabrielle Smith

Gabrielle Smith, of the Brooklyn band Eskimeaux, is a triple dragon. According to the Chinese Zodiac, if you are born in the year in the dragon, the month of the dragon and the day of the dragon, you are a special human being. Her album, Year of The Rabbit, out today on Double Double Whammy, has little to do with the Chinese zodiac, which determines your fortune based on the year of your birth. But it’s full of perfect pop songs that recount the details of Smith’s relationship, which began during the year of the rabbit (2011). Her last record, 2015’s O.K. was an anthemic announcement that something exciting was about to happen; the much shorter Year of the Rabbit feels like a bookend, or the last chapter of a novel. Gabrielle Smith has been recording music for close to 10 years, and also plays with Frankie Cosmos. She is about to embark on a series of tours that will stretch through the summer.

Why did you decide to call your album Year of the Rabbit? Does it have anything to do with the zodiac?

It actually doesn’t have anything to do with the Chinese zodiac, except for the fact that I was excited about the rhyme. It’s always exciting when there are things that just happen to rhyme, and I tend to stretch what I think are the limits of rhyme. The opening lyrics of the record are, “2011, the year of the rabbit,” and I thought, “Oh my god, that kind of rhymes, use it.” But 2011 is the year that my partner and I started dating, and while I was writing this song I was thinking about the things that we’re confronting now as a couple—both problems and things that are good. I was reflecting on when our relationship started, and trying to figure out if they were things that were consistent, or if they were new. And obviously the problems were not new.

Does each song reflect the entirety of that relationship? Is it set in the present?

The first song is set in 2011 and then it progresses through to now. In a way, it’s a chronological record.

The song “Drunk,” seems to be a about a very specific evening. Can you tell us about that evening?

I was walking around with my partner, which is such a simple, normal thing. It hadn’t happened in a really long time and probably wasn’t going to happen for a really long time because both of us are super busy. Us just getting to go for a walk together wasn’t that normal for our relationship, so it was very exciting to me. The whole song ponders other great things that would seem really normal. One of the lyrics is “Dinner date and a movie?/ Sounds amazing to me.” But it’s something that we never get to do, which is explored throughout the song.

You have been on tour so much. How has that been? Any rough patches?

When we used to tour we would play in these places that didn’t care that we were playing, and we’d often sleep there. These places were often really dirty and nasty, and the people are really intense and disruptive. Sometimes we would get into this kind of situation and feel like it was our only option. We couldn’t imagine leaving and staying somewhere that made us feel comfortable. But then touring with Frankie Cosmos showed me what standards are, and what you can reasonably expect or reasonably demand from yourself as far as comfort is concerned. These past few tours have been amazing and really comfortable, because I finally realized you don’t have to sleep at the venue. We’ve been playing at fancier venues too, where you aren’t allowed to sleep.

At this point are you supporting yourself through your music?

At this point I do not have a day job. Or I guess this is my day job. My mom always told me not to slack off in math class, because you’re going to need those skills no matter what you do, and I was like, ‘Mom, shut up I just want to be an artist,’ and she would say, ‘You’re gonna get screwed in the future.’ And it turns out, she was right. You do need math.

What music will you bring with you on this next tour?

That is a hugely important question that I need to figure out. My car is the car that we are taking on tour and it only has a CD player, and we’ve been toying with the idea of getting some kind of AUX cable installed. I watched a video about how to install it yourself, but I’m not going to do that because I feel like I’m just going to break it. The CDs that we have right now in our car are Alex G’s Beach Music, which I listen to like 90% of my life, and we have a Hall & Oates Best of the 80s CD. We’ve got a really scratched up Elliot Smith CD—self-titled of course—and that’s pretty much it. We also have Nirvana’s In Utero, but we like Nirvana more in theory than in practice.

What does that mean?

We’re like, ‘Nirvana is awesome and they rock!’ and then we turn it on we’re like, ‘Alright, I wanna listen to Alex G now, because this is too ‘blaaaaaah.’’ It’s really awesome to walk around to, but maybe not as much to drive to, because you’re trying to not hit other people and you get angry. Maybe it would be fine in other cars, but my car has a pretty trebly stereo system, so it’s kind of dangerous to listen to.

When you’re thinking about putting about a record. How do you imagine people listening to it?

Alright, here’s my ultimate scenario. I definitely think it would be the most dope to listen to it on vinyl, because that’s the nicest way. But I think, if it were me, as a new listener, I would like to be in the late summer. Your hoodie is up and you’re listening to it on some kind of mobile device, walking through the woods. Or, like, a very chill environment where you could be by yourself so you might break out into dance, because you know that nobody’s watching you. That’s my ideal listening format.

So this record is specifically for late summer in shorts and a hoodie? Is there a parka record coming out for winter?

I’ve already been through my parka record phase. O.K. was like, you listen to it right before the summer when you’re just excited about not wearing as much clothing. But Year of the Rabbit is definitely like you’re ready for your hoodie. But you’re still in shorts, because you’re a really optimistic person.