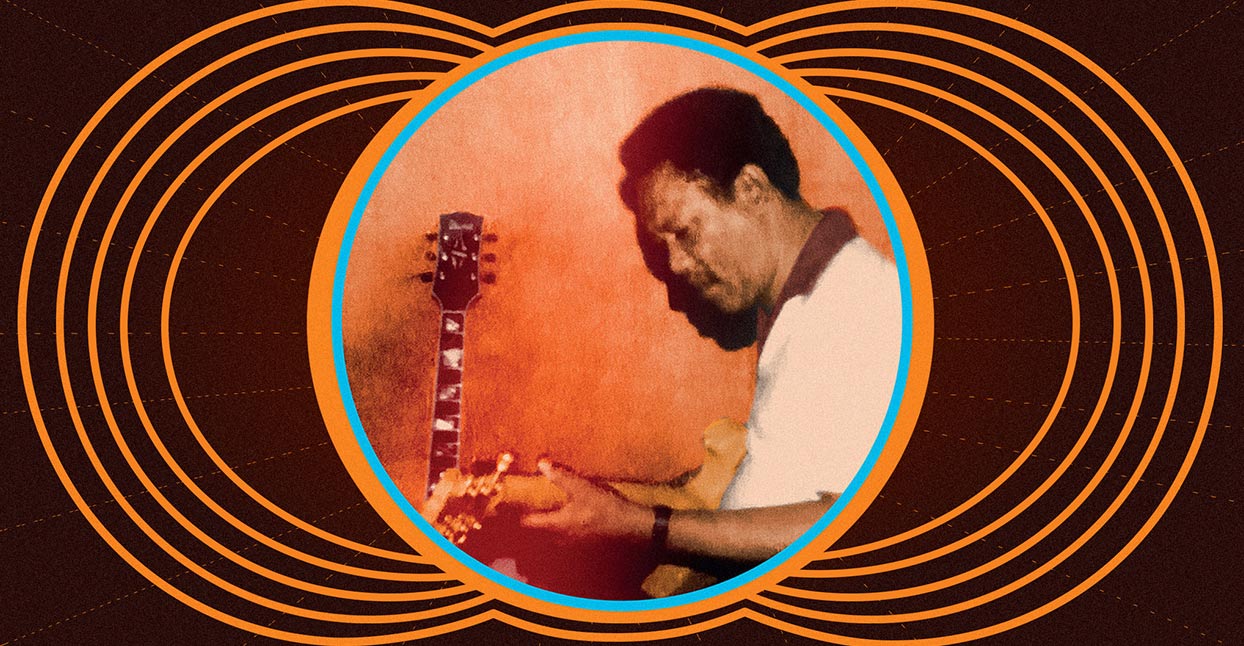 In the 1980s, Miami was a focal point of American pop culture. Don Johnson and Philip Michael Thomas, in their pastel jackets and white linen pants, were drawing 20 million viewers every week in Miami Vice. The bold, garish design of Scarface, which is set in the city, made it stand out from other gangster films, and it went on to become holy text for rappers for years to come. And the excess at the Miami nightclub The Mutiny was making headlines during a decade known for its overindulgence.

This was the environment into which legendary Jamaican musician Ernest Ranglin arrived, traveling to the city on the invitation of fellow Jamaican music legend Noel Williams, aka King Sporty. The two old friends were convening to work on Be What You Want to Be, a Ranglin solo album that would fuse classic reggae with the electronic post-disco sounds pulsing through the nightclubs of early ‘80s Magic City. In the U.K., the album was released as From Kingston J.A. to Miami U.S.A., and while that title is extremely literal, it also deftly summarizes its unique grooves.

“It’s a little bit different from the normal disco, funky disco, sound,” says Simon Lee, one half of house music group Faze Action. “It’s got that Jamaica feel mixed with disco. It’s definitely got that sort of flavor.”

Lee first discovered Be What You Want To Be in the mid ‘90s while working at Daddy Kool, a beloved reggae music shop on London’s Berwick Street. The album has remained a regular feature in his DJ sets (“It kind of stayed with me ever since then, really”) and it was Lee who passed it on to record label Emotional Rescue with the advice that they consider a rerelease—an idea that, thankfully, they decided to pursue.

Born in 1932 in Manchester, West Jamaica, Ranglin’s recording career began in the 1950s. He played guitar on the soundtrack to the first James Bond movie, Dr. No (1962), and counted Bob Marley and Prince Buster among his collaborators. By the time he was en route to Miami, Ranglin had at least a dozen solo albums to his name, showcasing his classic jazz-style fretwork.

King Sporty came from similar stock. When he passed away in 2015, headlines tended to focus on his role as a co-writer on Marley’s ubiquitous classic “Buffalo Soldier.” But Sporty’s legacy is nothing if not broad. Ranglin knew the producer and DJ from the renowned Studio One recording studio in Kingston where, under the stewardship of label head Clement “Coxsone” Dodd, the pair would hang out with guys like Lee “Scratch” Perry and Clancy Eccles, and genius would be regularly laid down on wax.

In 1968, Sporty moved to South Florida. Embracing the disco era, he worked with KC & The Sunshine Band, among others, before his sound evolved toward funk, electro, and Miami bass. Just last year, Emotional Rescue reissued a series of Sporty’s 1982 singles, released under the moniker King Sporty & The Ex Tras on his own label Konduko, on which the virtuoso was deeply immersed in fizzing synths, synthetic basslines, and early rap-influenced vocals.

Ranglin was living in New York when he accepted Sporty’s offer to produce his next record. When they met up in Miami Sound Studio, they were joined by an impressive line-up of guest stars including Florida soul queen Betty Wright (Sporty’s wife until his dying day), singer Bobby Caldwell, and solo R&B star Timmy Thomas. Five of the six songs that eventually formed Be What You Want To Be were penned by Sporty, with a reggae-heavy cover of Anthony Hester’s R&B classic “In The Rain” filling out the track list.

The result was an album that at times sounds very Kingston-centric. Leaning on classic rocksteady, the instrumental “Why Not” features a mid-tempo drumbeat, repetitive key riffs, and sunny horn stabs, over which Ranglin deploys his trademark jazz-style guitar licks. The sharp strings of “Be What You Want To Be” summons the spirit of the deceased Miami disco scene. Keeping things fresh, the prominent bass, mean congas and funky vocals of “Soft Touch” land close to the kind of music Los Angeles star Roy Ayers was making at the time.

The record appears to have been released without much ceremony. It came out in the U.S. on Sporty’s Konduko Records as Be What You Want To Be and on Vista Sounds in the U.K., with a slightly different cover design and rearranged tracklist, as From Kingston J.A. to Miami U.S.A. (It’s a weird quirk of the album’s history that both those editions and, now, the reissue, have all assembled the songs in a different order.)

Vista Sounds was run by industry kingpin Jeffrey Collins, an entrepreneur who’d found success as a man behind the music. “I was releasing a whole catalog of Jamaican music, mostly reggae music,” he explains, “and I was asked if I’d like to release the album in England and I did. Very simple.”

Collins’s career has been long and his legacy unimpeachable. He is quick to tell me, with pride, that he turns 80 next year. “I have released literally thousands of records over the years and if you go to my name, Jeffrey Collins, on Discogs, you will see,” he asserts. But on Be What You Want To Be, at least from a business point of view, he’s less enthusiastic: “It was a unique recording. It wasn’t like the other reggae records. It did pretty well, it didn’t do as much as some of my other releases.”

And so Be What You Want To Be was largely forgotten. Its key players kept their momentum: Sporty stayed in Miami and maintained an interest in programmed music. (“Computer Age,” released in 1996 under the name Sporty and the Laptop, pulls together classic house-music glamour and electro-funk in a zany retro-futuristic package, highlighting its creator’s relentless inventiveness.)

As for Ranglin, he’ll be turning 87 in June. The star spent the 1990s and 2000s furiously recording, adding new ripples to his legend. In 2015, he dropped Ernest Ranglin At Side Door Records, an album of fluid jazz guitar playing over strong Jamaican rhythms that once more encapsulated his timeless sound.

Now, we have the reissue of Be What You Want To Be—an essential part of the Ranglin and Sporty’s joint story, a glimpse at what was possible when Jamaican ingenuity joined forces with soulful American excellence, and a depiction of another side of 1980s Miami that belongs in its blessed cultural canon.