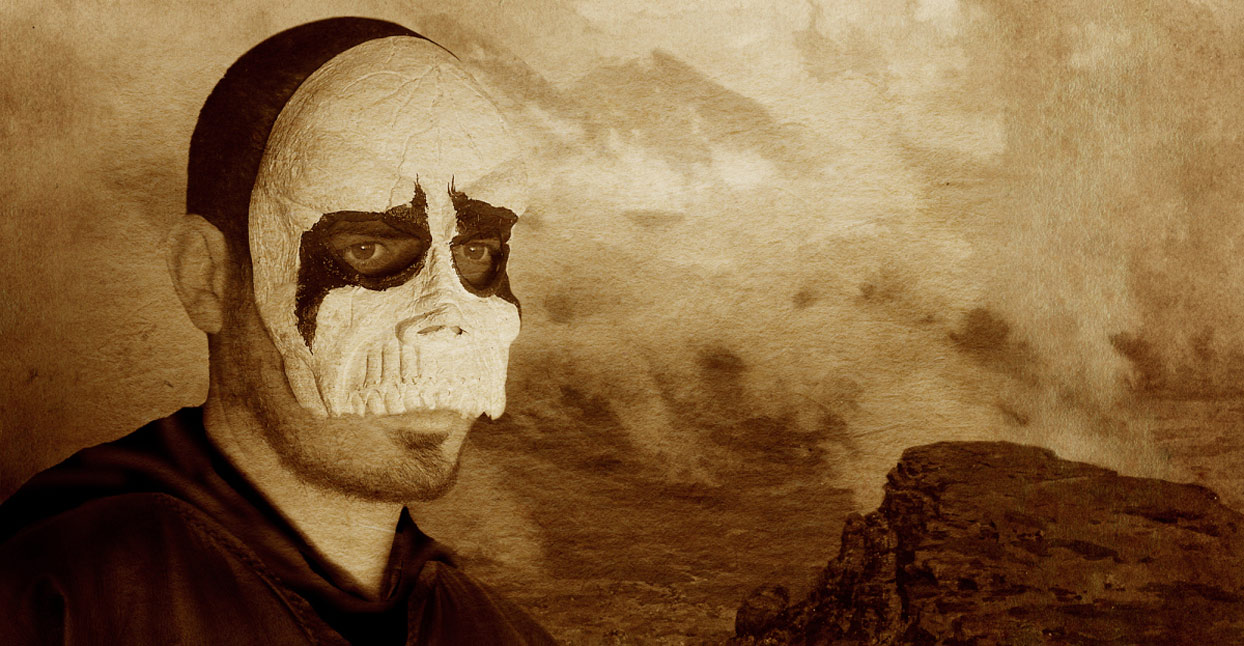 The Kingdom of Erang is a treacherous place. Head north, and you’ll come to the High Tower, encircled by dragons and looming dark and ominous. To the east is Arakno Castle, the place where unwitting travelers will find themselves lost forever in its catacombs. It’s populated by a host of characters—some of them friendly, some less so. There’s the Drunken Tyrant, who ascended to the throne by poisoning his father and his brother; the People of the Crystal Cave, with their sharp claws and fiery eyes; and the Stone Giant, whose unmoving visage betrays the kind of sadness that accompanies great loss. The deeper in you travel, the more you discover: the Gate of Kolm, the Village of Lobrok. And while it sounds like something out of Tolkein, or the kind of stories parents in the Medieval Age might tell their children to get them to go to sleep, they’re all the invention of one man, a Frenchman who goes by the name of Erang, and who is rarely photographed without his unsettling skull mask. And while the worlds he has created are fantastical, all of them—and the music he makes to accompany them—are drawn from real life.

“My art is very nostalgic and intimate,” Erang explains via email. “My main influence comes from my life—the experiences I had, the places and people I’ve grown up with. It’s all small details here and there—a specific sound, or the name of a song. They wouldn’t recognize themselves, but I know what they all mean. They all are my little secrets.” Erang funnels his “little secrets” into music that could broadly be termed “dungeon synth,” but that shorthand is selling his accomplishment short. Across 18 albums, Erang has steadily and gradually expanded his world, with characters who appear and reappear in different forms and different guises. “There are several characters and places who appear regularly through my albums,” he says. “Like the Drunken Tyrant, the Stone Giant, the Lost Underwater Kingdom, the Emerald Forest, and many more. When an album takes place in a different timeline, the characters evolve; the Drunken Tyrant on my synthwave album ANTI-FUTURE became the Drunken Maniac, and on my last album, which has a wild west theme, he became the Drunken Marshal.”

Concept records have been around ever since Tommy put his first quarter in the pinball machine, but what Erang has done is far beyond a concept album—he’s created a concept discography, painstakingly mapped, populated by characters with their own distinct personalities, and soundtracked by Erang’s own hauntingly beautiful music. The First Age skews semi-medieval, with synths that alternately gently pipe and ominously wheeze; Kingdom of Erang is gorgeously unsettling, with windswept layers of guitar and keys creating an atmosphere of high drama; and Casting the Ancient Spell Again is his most immediate, beautiful work, filled with ribbons of synth that unspool slowly, casting spells that lull the listener into a dreamlike state. What stands out about all of Erang’s records is the certainty of vision—for all of the minute adjustments in approach, the throughline of fantasy and Early Music themes bind them all together as products of one person’s specific imagination.

The vast majority of Erang’s albums are set in the Kingdom of Erang, a map of which appears on Erang’s homepage. Getting a grip on the lore is crucial to understanding Erang’s work—so much so that each album download is packaged with its own suite of accompanying materials: .pdf books explaining the stories of each album, annotated maps, illustrations, collectible cards of the characters. The level of thought, detail, and care Erang puts into each album goes far beyond the music it contains. It’s not just music—it’s a world unto itself.

“The Land of the Five Seasons is the fictional ‘earth’ where my world exists,” Erang explains. “It is a land where five seasons are taking place simultaneously, in five different parts of the Land: winter in the north, summer in the south, spring in the center and the east, autumn in the southwest. The fifth season is a season of magic, all over the Steppes of Kolm, in the west. It is there that the ‘Colored Salt’ formed. Rare and precious, the 13 different Colored Salts are the primary resource for sorcery. There are ‘doors’ between our world and the Land of the Five Seasons, and you can activate them with ageless books called ‘The Tomes.’”

Erang is also a character in his stories, but the way the man himself describes him, he feels more like a spirit guide or a quiet observer rather than a corporeal being. “Erang is the ghost of the shadows from the past,” he explains. “He wanders through the Land of the Five Seasons. He is the magician behind the curtains, knowing what was and what will be—that’s why he is wearing the Skull Mask. Even if my music is often sad and melancholy, I use my memories as a strength to create positive energy. That’s what the Skull Mask illustrates: a laugh in the face of time and death.”

The music itself has a disquieting, almost sepulchral sound, and drilling down on how it is created is a tricky task—one that Erang is hesitant to elaborate on. “The only thing I can tell you is that I’m using completely outdated software, more than 15 years old,” he says. “There are no rules. I always follow my heart and my passion. I can use the worst lo-fi sound or a high-end VST, or even me playing some notes on my guitar through an old recorder. No rules—just passion!”

It is that passion that binds all of Erang’s disparate albums together. Whether it’s the grinding synthwave of ANTI-FUTURE or the haunting dark ambient of Land of the Five Seasons, each album is unmistakably his own, guided by the steely vision behind the skull-shaped mask.

“Erang has always been with me, and always will be,” he says. “To me, it’s more than music, more than art. It was here long before I played my first note. We all have a secret inner kingdom, deep down in our heart and our own past. What I try to achieve with my music is to reconnect people with those memories.”