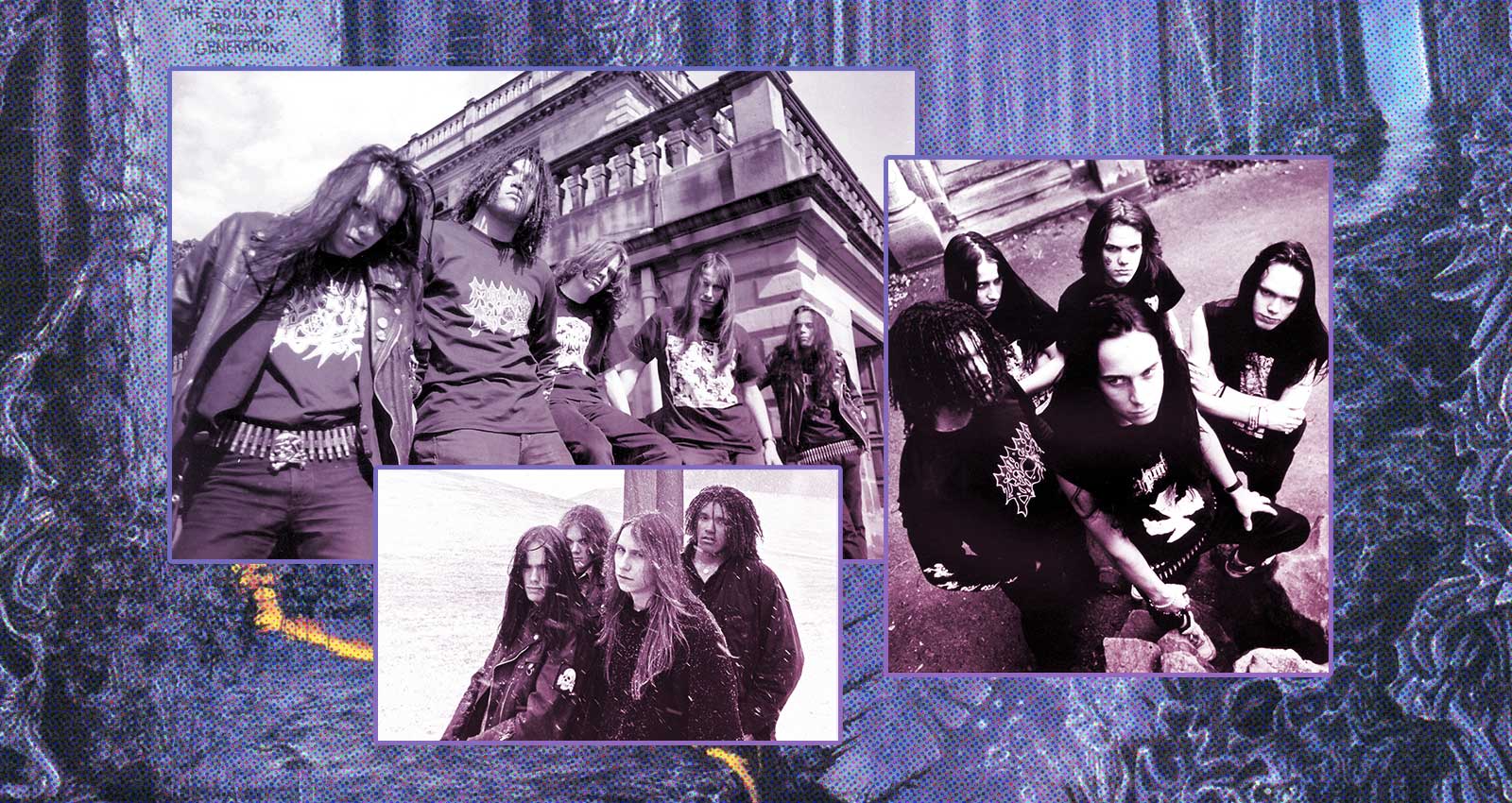 Lars-Göran Petrov, better known to metal fans throughout the world as “L-G,” passed away in March after a battle with a rare form of bile duct cancer. He was 49. Though his time on Earth was tragically short, the shadow cast by Petrov’s work in Entombed is immeasurably long. Just as his bandmates Uffe Cederlund and Alex Hellid are credited with redefining death metal’s instrumental palette through buzzsaw riffs and Boss HM-2 pedals, L-G laid the groundwork for its trademark vocal approach, making him one of the most influential frontmen in the scene.

When death metal first emerged as a distinct subgenre in the mid-’80s with albums like Possessed’s Seven Churches and Death’s Scream Bloody Gore, vocalists tended to be tasked with playing an instrument while they sang. With a few notable exceptions, that meant the vocals on early death metal albums tended to be tied directly to the rhythms of the riffs, used more as gruesome extra percussion than what could conventionally be called singing. On 1990’s Left Hand Path, a then-18-year-old Petrov took a more expressive route. Liberated from the need to play an instrument, he attacked the songs on Entombed’s legendary debut as a true frontman, running roughshod over the rest of the band’s playing in a wild-eyed frenzy. Whether summoning a deep bellow, unleashing a tortured howl, or managing to build an infectious hook out of a run of indecipherable lyrics, Petrov was the center of attention whenever he sang. Here, for the first time, was a death metal vocal performance that was every bit as crucial to what made the songs work as the riffs, the atmosphere, and the production.

Petrov departed Entombed before the recording of their sophomore effort, Clandestine—an apparent result of his quarrel with drummer Nicke Andersson. Petrov returned to the fold for 1993’s Wolverine Blues, marking a major pivot for the band, as well as the unwitting start of a new chapter in death metal history: death ’n’ roll. Wolverine Blues was the last album Entombed would release on Earache Records, the iconic UK label that also brought the sordid symphonies of Carcass, At the Gates, and Napalm Death to the world. The band’s story gets messier after that point, and at the time of Petrov’s death, he was singing for Entombed A.D., a splinter group that excluded the rest of the lineup from the Earache years.

Setting aside the interpersonal strife that would plague later incarnations of Entombed, and regardless of what you think of their later records, the trifecta of Left Hand Path, Clandestine, and Wolverine Blues remains one of the strongest runs in metal history. Here’s why.

The first lyric on Entombed’s landmark debut album is “I am my own God,” sung with the utter conviction of belief that comes with being 18. Petrov, Cederlund, Hellid, and Andersson then promptly get down to the business of proving they’re not full of shit. That opening title track alone has a half-dozen of the most instantly recognizable death metal riffs ever, and its genius interpolation of the Phantasm theme consciously places it in a lineage with Possessed’s “The Exorcist,” one of the genre’s first (and best) songs. Entombed wanted to be compared to the greats, and they wanted to come out on top. After the title track, the hits just keep coming. “Drowned,” “Revel in Flesh,” and “Supposed to Rot” launched legions of Swedeath imitators in their wake, and the mid-album diptych of “But Life Goes On” and “Bitter Loss” provided a surprisingly insightful set of ruminations on mortality for a bunch of teenagers.

It’s become a bit overstated over the years just how much of Left Hand Path’s greatness is owed to its maxed-out HM-2 pedal and the magic of Stockholm’s Sunlight Studio. Those elements may have given the album much of its signature sound, but we wouldn’t be talking about it in hushed terms more than 30 years later if it didn’t also consist of 10 of the greatest death metal songs ever written. As we’d see time and time again in the ensuing years, the chemistry of the band was porcelain-fragile, but when everyone was locked in, there was nobody else in the world who could do what Entombed could do.

Clandestine is an oddity in the Entombed catalog as the lone album without L-G Petrov. Petrov’s temporary ouster from the band meant Nicke Andersson had to step in to handle vocal duties. (In another layer of oddness, live fill-in Johnny Dordevic is credited as the singer in the album’s liner notes. Dordevic does not actually appear on the album.) Andersson would go on to considerable mainstream success as the lead singer of groovy hard rockers the Hellacopters, but he’s no match for Petrov as a death metal singer.

Fortunately, the songs on Clandestine are so undeniable that even a serviceable vocal performance is more than enough to carry them. “Sinners Bleed” is as strong as any track on Left Hand Path, and Petrov was performing “Stranger Aeons” and “Chaos Breed” with Entombed A.D. in the last shows he played before his cancer diagnosis, despite the fact that he didn’t sing them on the record. The album doubles down on the buzzsaw Swedeath of its precursor, but in the margins, you can hear traces of the more straightforward death ’n’ roll band Entombed would soon become. There are those who will tell you Clandestine is even better than Left Hand Path, and while I won’t go that far, I’m comfortable calling it a masterpiece—albeit a masterpiece tinged with more than a little what if?

The final Entombed album to be released by Earache may have sounded like a radical reinvention at the time, but we know now that it was the sound of these mad Swedes becoming the band they were always meant to be. Wolverine Blues is a rough-and-tumble bacchanalia of Motörheadian proportions, infusing the band’s death metal with so much rock ‘n’ roll swagger that a new subgenre was born right then and there. Death ’n’ roll has been a controversial style pretty much throughout its existence, but few would deny that in its purest form, it can be a truly awesome force. Nearly every song on Wolverine Blues hovers around the three-minute mark, getting in and out with maximum efficiency and maximum neck-snapping precision.

The album also marked Petrov’s return to the band, and nothing released under the Entombed or Entombed A.D. monikers would ever exclude him again. The barking, mosh-inciter on Wolverine Blues may not sound exactly like the otherworldly presence who stalked Left Hand Path, but he sounds so cool; the platonic ideal of the death metal vocalist that hesher kids try to imitate in the mirror. The chorus to closer “Out of Hand” (“Jesus Christ/ Lord of flies/ In disguise/ FUCK!”) remains the most straight-up badass musical moment of Petrov’s career. It’s opening up circle pits in heaven now.