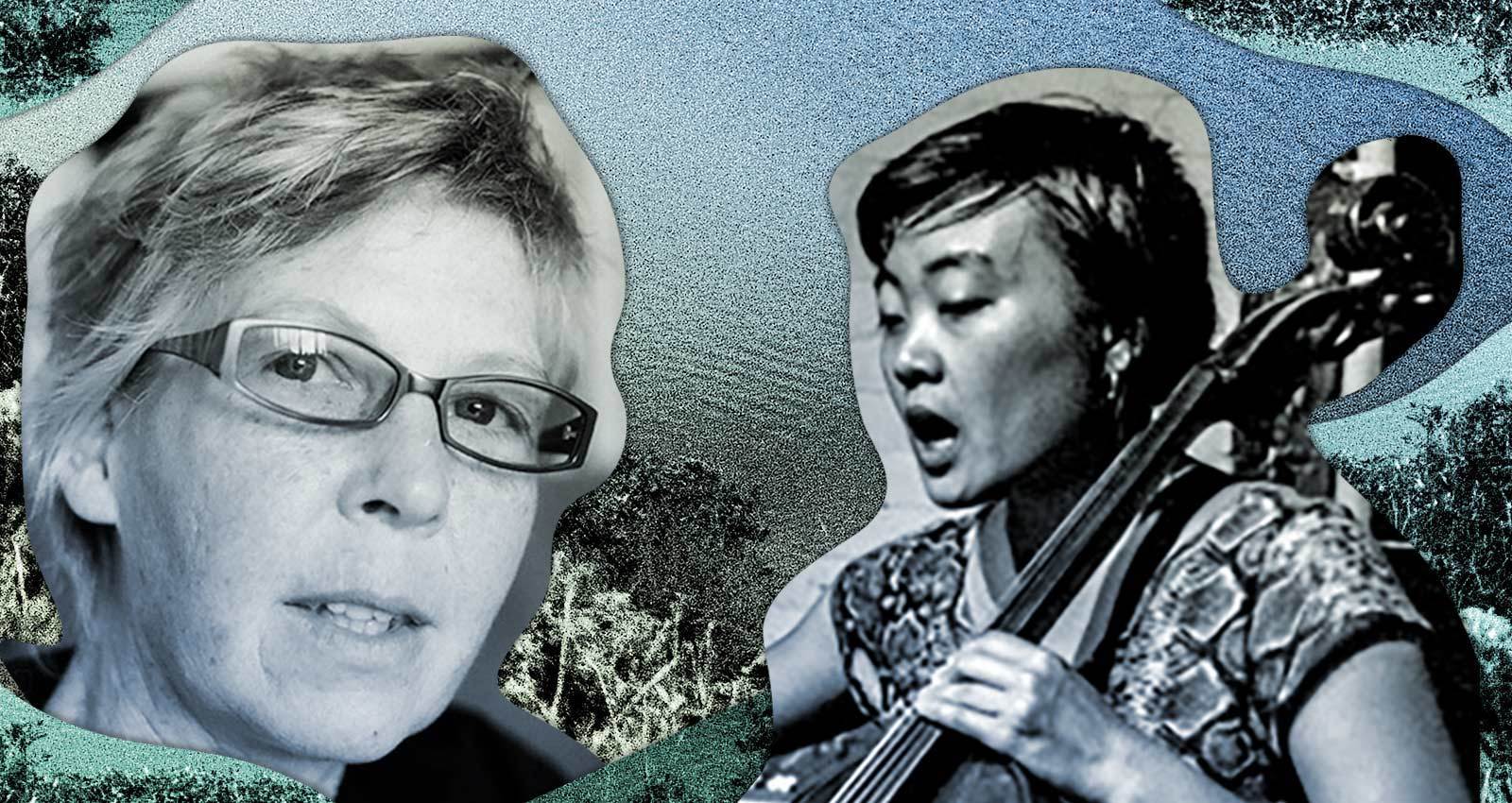 The Long String Instrument sounds like nothing you’ve ever heard. It looks like no musical instrument you’ve ever seen. It has no frame, no outer shell; unlike a harp or a piano—its closest relatives—its strings, more than 40 in all, hover in midair, stretched taut from wall to wall in whatever room its creator, composer Ellen Fullman, has been permitted to install it. Her technical rider, the document sent to agencies or institutions looking to book her for a performance, specifies a minimum length of 16 meters (53 feet) for her strings, though the ideal is 20 meters or more, and adds, “Doesn’t work outdoors. No carpet.”

The strings are in two sets, and tuned using hanging weights, on the same principle as a capo attached to a guitar’s neck. Fullman plays the LSI by walking up and down between them, stroking the strings with rosin-coated fingers. The resulting frequencies are immersive; the sound seems to come from everywhere at once. It can imitate a zither or a sitar, or sound like wavering feedback, or a whale song as heard from inside the animal.

Fullman began her artistic career blending sculpture and sound art. In 1980, she created the Metal Skirt Sound Sculpture, which consisted of four guitar strings stretched between her shoes and the “skirt,” which was a crimped sheet of metal, amplified with a contact microphone. As she walked in a constricted manner, the strings stretched and the metal clanked. “I was very interested in building things and hearing the sounds, the resonances of materials,” she says. Later that year, she saw legendary avant-garde composer Alvin Lucier’s piece Music On A Long Thin Wire, which involved vibrating a single strand of wire with a magnet and an oscillator, at the Walker Art Center, and the idea for the LSI began to take shape.

“That installation got me thinking what I might do with long wire, with a physical manipulation of the wire. What does it sound like if you try to pluck it or if you bow it? So I got some piano wire and literally just strung it up wall to wall in the space where I worked. I was fortunate enough to have a 2000 square foot loft space in an industrial building in St. Paul. It was a perfect place to build things. And that’s where it started,” she says.

The LSI has been her life’s work ever since. She’s taken it all over the world, and recorded multiple albums, including solo works and collaborations with percussionist Sean Meehan, minimal electronic artist Eleh, trombonist Monique Buzzarté, and cellist Okkyung Lee, among others. Her latest release, Harbors, is a duo with cellist Theresa Wong. The piece premiered in 2015, and gradually evolved into its recorded form over the course of multiple performances.

The album contains three tracks ranging in length from nine to 20 minutes. Each begins slowly, but gathers steam quicker than expected, eventually resulting in a flurry of sonic activity. In “Harbors Part 2,” for example, one can hear plucking like a sitar, or a detuned guitar, as well as a drone bed that seems to uncurl with imperceptible slowness; in the middle of all that, deep booms come from the cello as Wong slides her fingers across the strings, plucks them, and bends them with enough force to cause a listener to gasp with surprise. In “Part 3,” metallic ringing tones mix with almost Doppler-effect drones; it’s like hearing Lou Reed’s Metal Machine Music from a passing car. The piece has flow, and an internal pulse, but time seems to stop as it’s playing.

But perhaps what’s most impressive about Harbors is how equally balanced it is. Fullman is absolutely not playing support to Wong, and that’s by design. “I do not want to be the background…the foundation upon which melody is performed,” she says emphatically. “The way I’m thinking about my sound is, I’m working with harmonics, with partials, and the sound that is produced has almost a dimensional quality—it’s almost like a swarm of many sounds all at once, so in a way I’m composing with resonances and finding sympathetic resonances which drive the string to modulate or produce a different set of harmonics. So if I’m working with a violin, or something that’s considered a melodic instrument, what I want to do with that is produce frequencies with that instrument that drive my instrument to resonate and manipulate it to resonate in a different way. So [there’s] an interactive physicality in my music.”

Wong says that since she was the variable, Harbors was built around the sound of the cello. She describes her own instrument’s microtonal capabilities, and how to achieve harmonics and overtones on it, concluding by saying, “That’s the material we used to create Harbors—we mapped a whole bunch of pitches that already naturally occur on the cello, and named them. They’re referred to by using fractions or numbers. We don’t call it E sharp—it’s 3 over 2, or 16 over 15. And so every section of the piece would be a subset of our grand mapping, let’s say.”

“Mapping” is a literal description of the composition. Because of the size and properties of the LSI, it’s impossible to write music for it using conventional Western notation. Fullman has developed her own system which she says “describes time by distance, and transitions occur along the string length.” The same way a guitar plays different notes based on where your fingers land on the fretboard, the LSI produces different harmonics based on where the tuning weights are hung, and where the player is standing. “So in my notation, I can mark off a specific location where I want something to happen, like a chord change or something, and I can reliably repeat a kind of timbral event based on location. It’s all graphic. It’s all just basically describing a movement along the length of the wire,” she says.

Wong says that the passages—and there are many—where it becomes difficult to tell whether a given sound comes from the cello or the LSI are deliberate, but they’re not the whole point of the piece. “We did intend to blur that line at times, so it’s good that there’s times you can’t tell who’s playing, [but] of course there are times when we really wanted to be distinct, because that’s the point of composing for two instruments. But by using these pitch sets, we’re able to create kind of a sympathetic resonance as well as harmony…by combining the use of different overtones, each section has sort of a different harmonic world.”

As might be expected, playing the LSI is an extremely physical activity. “You feel it in the fingertips—there’s a buzz that travels up your arm,” Fullman says. In performance, she effectively paces off the length of the room over and over, for an hour or more. “There’s an optimal speed at which to walk to produce the sweetest tone, and an optimal amount of pressure to apply—pressure changes which harmonics are being produced. Harder pressure plays out the fundamental tone of the string, and a very light pressure plays out harmonics, so there’s a variation between that that I use as I articulate.”

“It’s kind of a joke,” she admits. “When I have a rehearsal with musicians, they’re all sitting around, but I’m getting in my daily exercise.”