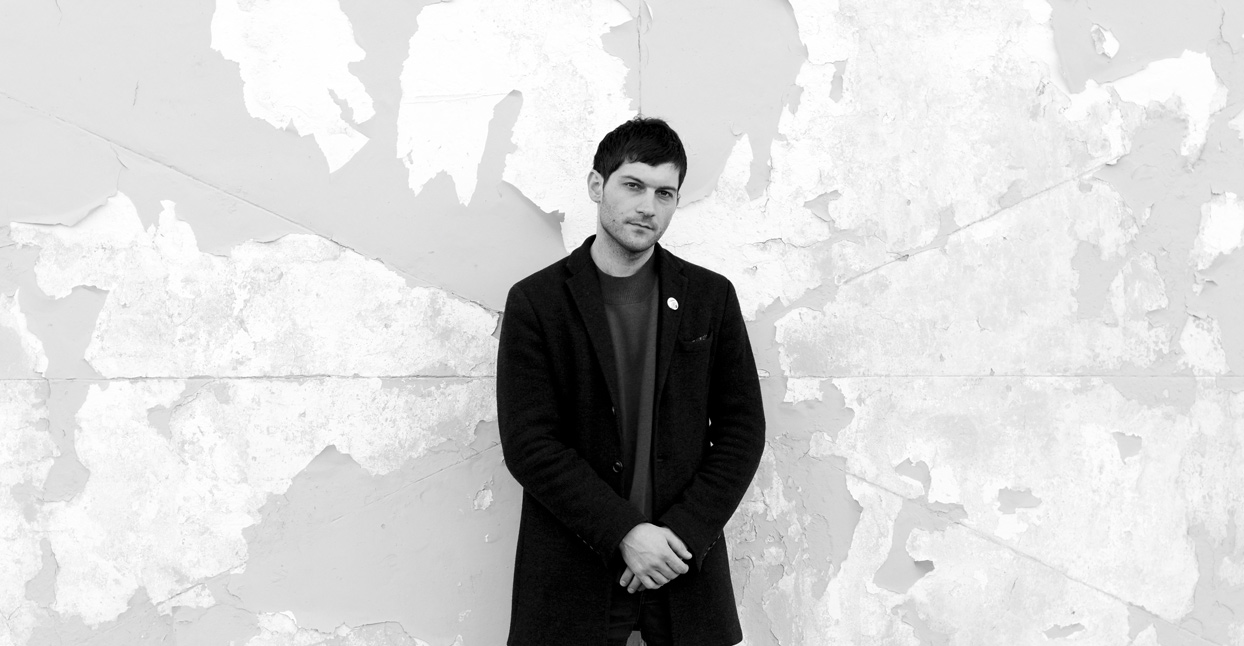 Drummer Eli Keszler is as methodical in conversation as he is behind the kit. Discussing his music over Skype, the New York-based musician takes long pauses before answering questions, literally thinking out loud; he rolls his drumsticks around in his hands, tapping out rudimentary patterns on his kneecaps as he puts things together.

“I think that the greatest compliment I get is when people come to a concert and tell me that they forget that they were listening to a drummer,” he says, after a moment of contemplation.

Keszler isn’t any old four-on-the-floor player. His signature style of play involves combining dense flurries of gentle hits that come together to create nearly sustaining sounds, which he then mixes with minor use of electronics for harmonic effect. This ingenious adaptation, modeled off John Coltrane’s “sheets of sound” technique, recently helped Keszler top Boomkat’s 2018 Album of the Year list with his cityscape-inspired album Stadium, which reflected Keszler’s real-life move from Brooklyn to Manhattan. Not one to sit idly by, just off the heels of his last release, the drummer has returned with Empire, a three-track EP that delves into the shadows of the skyscrapers the musician previously glorified.

Keszler became obsessed with jazz in high school, listening to and absorbing everything he could find. He’d pick apart classic artists like Elvin Jones and Art Blakey, methodically breaking down the techniques they were using. This practice bled into his time as a student at the New England Conservatory of Music, and more significantly, his introduction to Coltrane’s aforementioned “sheets of sound.” The term, originally coined by legendary jazz critic Ira Gitler, refers to the saxophonist’s use of breakneck arpeggios—spanning both the lower and upper registers of the scale—to transcendent effect: a sea of instrumental squalls, assimilated into a vast ambient cloud.

“I began working with people like Phill Niblock and Tony Conrad and getting interested in drone music, but I felt like that was their language,” says Keszler. “I hear the individual hits, but I don’t hear my music as particularly fast. I actually hear it as quite slow and made up on lots of points. There’s a huge confusion between volume and power, and I think there’s another confusion between density and speed.”

After graduating from the Conservatory, Keszler honed his percussive craft in the studio, with a particular focus on weight, balance, and fluidity. His obsession to detail beget intense self-scrutiny—sometimes practicing for up to 10 hours at a time—and eventually, his distinct, analytical sound. Before long, he was one of experimental music’s most in-demand sidemen; recent years have seen him manning the kits for the likes of Laurel Halo, Rashad Becker, and Oneohtrix Point Never.

Keszler credits his collaborations with non-jazz artists not only with strengthening his skills as a player, but his overall sense of artistic purpose. “I grew up thinking I was going to be a jazz drummer, [but] then I realized the jazz circle was extremely conservative, closed off, and uninterested in a lot of the ideas that I was interested in,” he reflects. “At that point, I kind of vowed that I would never become a session drummer. However, it’s all on my own terms, and I’m bringing my own sound to it. It’s been really organic and rewarding. The last couple of years have given me some of the best musical experiences of my life.”

On Stadium, Keszler explored ideas relating to the urban landscape, the utopianism of cities, and what’s going to happen to them in the future. He’d walk around urban areas listening to his music, testing the mixes against towering buildings, blinding advertisements, and leaning into the inspiration he gains from the natural rhythms of the world. Conversely, Empire—a project that Keszler admits to being a possible turning point in his discography—dives into the dystopian layers of cities by utilizing foreboding ambient passages processed with Sensory Percussion software, and more industrial, full sounding percussion placed on top of noirish field recordings of city life.

“I see Empire as connected aesthetically to Stadium in a lot of ways,” says Keszler. “But I also see it as like a standalone EP, as a transitional project. I really wanted to create these utopian landscapes that felt devoid of people. I think there are moments in everybody’s life where you momentarily enter dystopia.”

“There’s a great [Jorge Luis] Borges story where he talks about the scariest dream he has ever had,” he adds. “He approaches his home and can’t remember which apartment he lives in, and he can’t find the key to it, but he surely lives there. It’s just a feeling of not knowing where to go. That’s the kind of space that I’m trying to evoke with this record.”

Empire, in its final form, proves just as haunting as Keszler intended: errant pieces that wander about and slowly unravel, like a person stranded in a massive city block system, desperately searching for a way out. On “The Tenth Part of a Featured World,” the final track on Empire, the artist gradually reverts to airy atmospheres of Stadium, beckoning us to follow him out of the maze and into whatever labyrinth he’ll construct next. The only rule is to go with the flow.