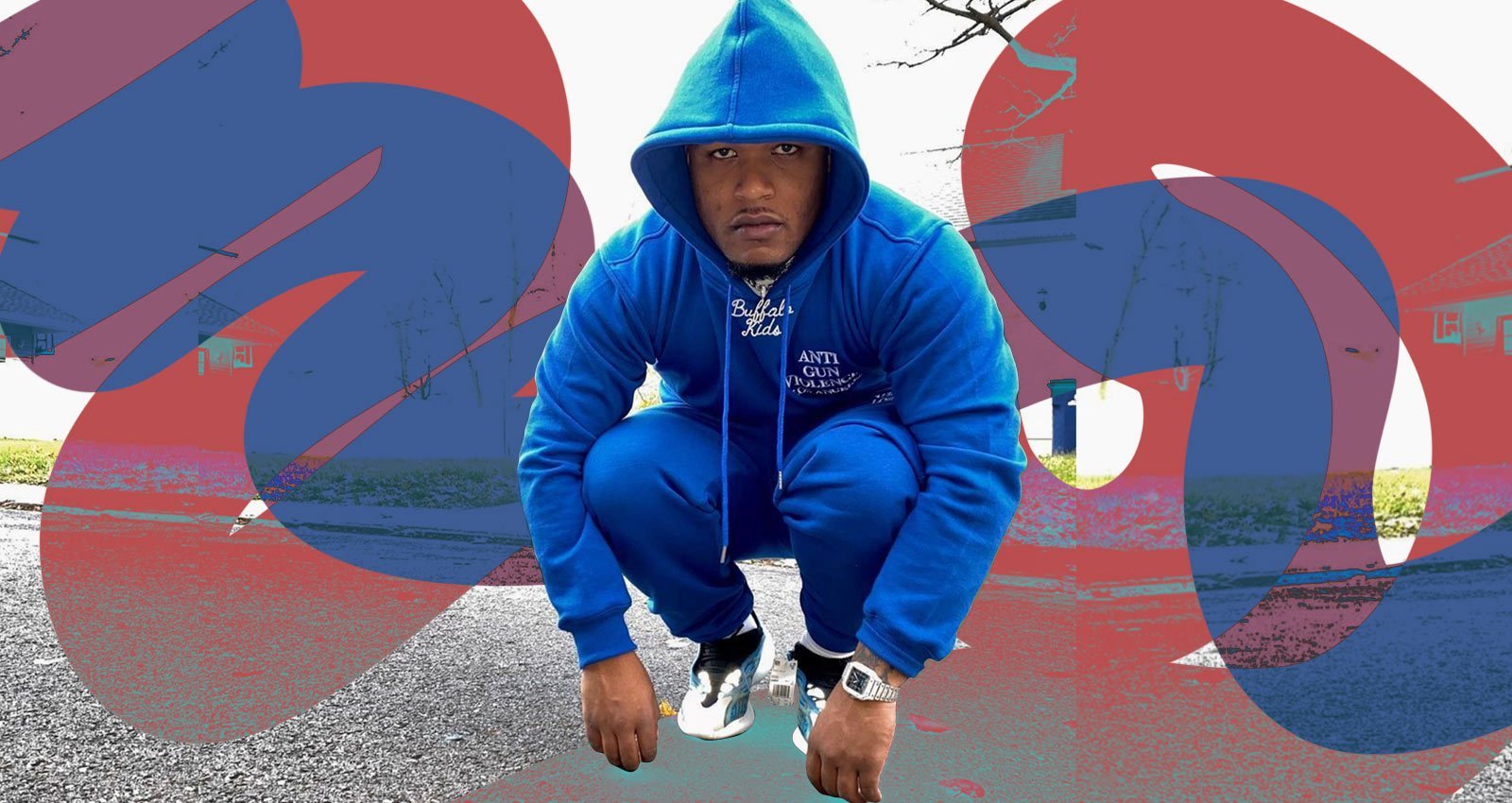 The recent success of Griselda Records has brought more attention to Buffalo, New York’s close-knit hip-hop scene—and even more so to the artists who are in that label’s orbit. One of those is Elcamino, whose frequent cameos on Griselda projects have led many to believe he’s signed to the label. The truth is a little more complicated. “I’m always associated with Griselda because we really like a family,” he says. “It’s more than just rap to us, because we look at each other as family. So, I’m gang, of course. I just ain’t on paper.”

Elcamino was born in Buffalo, where the majority of his family still lives. When he was nine years old, his mother moved Elcamino and his siblings to Baton Rouge, Louisiana. He spent four years in the South—including 2005, the year Hurricane Katrina hit New Orleans. “I was in Baton Rouge, so the shit wasn’t as bad as it was in New Orleans. It still affected us, ‘cause it was a storm,” he says. “But after that, everybody from New Orleans basically just moved to Baton Rouge. We weren’t beefing with them, but you would always hear about somebody from Baton Rouge fighting somebody from New Orleans, ‘cause they territorial. That’s how that shit was. Down South shit. That shit fucks your brain up.”

Elcamino had started writing rhymes when he was still in elementary school, and laid down his first track towards the end of his stay in Baton Rouge. “I recorded my first shit in Louisiana at my cousin’s studio,” he says. “I want to say I was like 13 or some shit like that.” In 2007, his mother reluctantly moved the family back to Buffalo. “My grandparents got old, so we had to come back to take care of them,” he says. “But if it wasn’t for my grandparents, my mom would never have moved back.”

Back in Buffalo, he started taking his craft more seriously, dubbing himself Meechy Elcamino. In high school, he linked up with a crew called the Local Residents. “Them was my boys,” he says. “I just came and joined what they already had going on. It wasn’t something we all built together. I just became a part of that, ‘cause I was really trying to be a rapper, and they was already into it, recording all the time and shit.” By 2015, he was dropping a steady string of projects including 716, The Natural, Doxa, and 1996. “Them was like when I first really started trying to record. They my lil’ mixtapes I did with the homies.”

Of these early offerings, Doxa is the clear standout. As Elcamino puts it, “That’s when I was tapping into shit as far as reading more and learning more. I was more aware.” His sing-song flow on the project is heavily inspired by the Harlem rapper Max B. “Max Biggaveli is one of my favorites, bro. You can tell. Everybody can tell. I don’t ever say it, but it’s obvious.” Nonetheless, flashes of Elcamino’s own personality shine through, his Down South bounce fully blanketing the no-frills production. (The way he winds his words around the flamenco guitar loop on “Vigilante” is a particular high point.)

It was shortly after this string of mixtapes that Elcamino was discovered by Westside Gunn. “He basically just found me in the bushes,” Elcamino jokes. “Nah, I’m just playing. Honestly, though, they just found me.” In the spring of 2017, Griselda signed with Shady Records, and by the summer, Gunn, Conway, and Benny were crossing the the country on their first proper tour. The run started with an epic show at the Webster Hall in New York, where Raekwon made a surprise appearance and named Griselda the torchbearers of 1990s hardcore hip-hop. Elcamino was supposed to have been on that tour, but he was on probation due to a gun charge. He had to wear an ankle monitor, and wasn’t allowed to leave the county.

But instead of dwelling on the missed opportunity, he concentrated on recording his debut album. By this time, he’d dropped the “Meechy” from his name. (“I think it was Westside who said, ‘You should drop the Meechy and just call yourself Elcamino.’”) That was also what he called his first proper solo album, a somber, downtempo affair that has the unmistakable Griselda gravitas. “West really exec produced it,” Elcamino says, “we just never said he did.” On Elcamino, the rapper sheds his youthful croon for a calm, nonchalant flow accented by a potent raspiness. His unflinching honesty on the LP gives the listener a window into his world. (On “Blood, Sweat & Tearz” he reveals that his younger brother died by suicide.)

Over the next two years, he released a staggering nine projects, including Where’s My Pyrex? with Oh Jay, Martyrs Prayer and Sacred Psalms with 38 Spesh, and Saint Muerte with Bozack Morris. But the hidden gem in this run of albums is 2019’s Lot & Abraham, an eight-track LP full of soulful production, and featuring the return of Elcamino’s stirring harmonies. It was also produced by a Buffalo legend: the late DJ Shay. “[Shay’s death] hit me so different,” Elcamino says. “Shay was one of my immediate people that I talked to everyday. I couldn’t even really take it in, because I had also just lost my sister. Even now, it’s still fresh, you feel me?”

Lot & Abraham also continues a tradition Elcamino began with Walking on Water and Don’t Eat the Fruit, drawing lyrical references and album titles from stories in the Bible. “My mom was a choir director,” he says, “So, that’s pretty much where I get my process from.” (His upcoming album Walk By Faith, Not By Sight continues that tradition.)

And regardless of the boost his guest verses and local affiliations have given him, it’s the adversity he has overcome, and the hours he’s logged in the booth that are the foundation of his success. “That’s how I really got to where I’m at,” he says. “Being focused, and trying to work through my situations.”