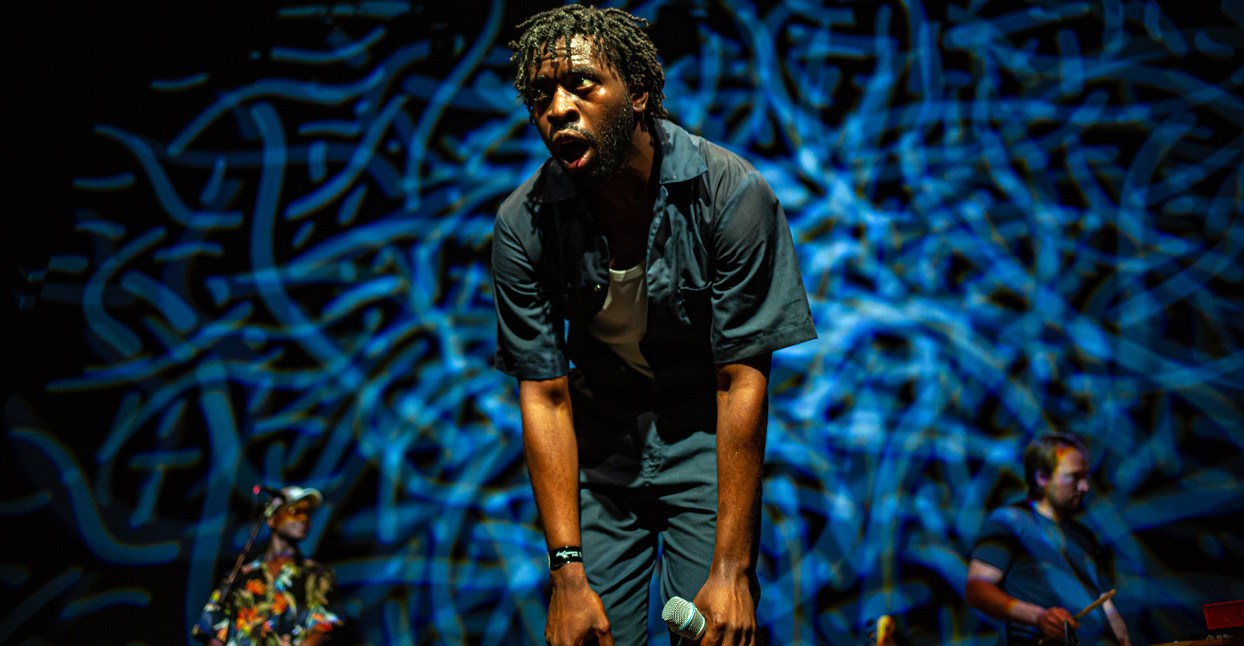 Edmund Oribhabor is sitting alongside his fellow Ed Balloon bandmates in their Los Angeles studio. He’s telling a story about growing up in the Boston suburbs of Roxbury, where everyone in the neighborhood would laugh when his Nigerian father would mistake the sound of firecrackers for gunshots. “They’re shooting! Come in the house!” Oribhabor recalls his dad saying, while playfully imitating his thick accent. Then, he grins, casually shrugging off the memory.

The idea of finding levity in darkness is at the core of Ed Balloon’s debut full-length, The Dubs, an experimental pop record with a sonic palette that ranges from the grimey R&B of Young Fathers to the glowing synth-pop of Toro y Moi. Over the course of our hour-long Skype call, Oribhabor outlines the various “Ls” (or losses) that he was working through while developing the record—like how “Rainbows” is about one of his close friends dying from a drug overdose last year. But instead of focusing on the tragedy of situation, the song is written from the perspective of being overjoyed from the high. “I’m touching ceilings / This here view is amazing,” he bellows as if he’s on top of the world. The only hint of darkness comes during the song’s outro, when Oribhabor repeatedly sings the phrase, “Save me.”

Though many of the tracks on The Dubs have a bleak backstory, Ed Balloon’s lively, animated productions often casts the subject matter in a more hopeful and optimistic light. “Du Rags in the Air” paints a scene of black men dodging flying bullets, but the grim images are cleverly concealed by the track’s clubby Kaytranada-like beat. And though Oribhabor says that “Toughie” is about “the fear of a black male being open and receiving love,” he outright rejects any overly sentimental wallowing over the waltzing electronic R&B ballad. “If we’re going to talk about real shit, the last thing I really want to do is sit down and cry,” he says. “I don’t feel like you speak your truth in a way where you have to be sober about it. I want people to move to this shit.”

The diverse set of influences that show up on The Dubs can largely be attributed to Ed Balloon’s longtime producers Dave Chapman and Sam Creager, both self-professed “metal kids” who gradually learned to work in an array of genres during their time running a music studio in Boston together. Oribhabor—whose inspirations range from Brandy to New Edition and Fela Kuti—first reached out to the two multi-instrumentalists more than five years ago, when he was making music as Ed Balloon by himself, and was looking for help recording his 2015 debut EP No Smoking. Ever since then, the trio have been workly largely in a kind of client-producer relationship—though Oribhabor never set any limits, instead allowing his collaborators to add their own stylistic touches to his songs. Early on, their eclectic music found a home on Deathbomb Arc—the L.A. label known for releasing music by experimentalist acts like Death Grips, Clipping, and JPEGMAFIA—which the band still feel is a fitting platform for their genre-melding project.

The Dubs marks the first time that Ed Balloon have officially been a band as opposed to a solo project, a transition that has been challenging due to each member’s varying musical pedigrees. “Because of the kind of different backgrounds we come through, it’s about picking a body of work that all makes sense together,” Chapman says. In the end, the 12 songs that landed on the album were culled from a total 23 completed tracks. Creager emphasizes the band’s shared ambition to make forward-thinking music. “We make sure that we’re making something that all of us have never heard before,” he explains. To help make The Dubs even more far-reaching, the band tapped a handful of collaborators to sprinkle some of their own magic onto the tracks, like multi-disciplinary rapper Open Mike Eagle, fellow Deathbomb signees They Hate Change, J Dilla’s brother Illa J, and the Madagascan vocalist Niu Raza. “We let them be who they are and tried not to tell them what to do,” Creager says. “They all totally delivered.”

The members of Ed Balloon hope to keep putting out music and touring; their ultimate dream is being able to work on the band full-time. But Oribhabor mostly sees it as a means to connect with people, and to inspire them to follow their dreams. “There was one time, someone at a show came up to me, and she was like, ‘I was afraid to be a singer and seeing you guys up there made me so motivated to do it,’” he recalls. “Me growing up in Roxbury, I was always told not to do music and that my voice was too deep. To see people feel encouraged to keep doing something…that means a lot.”