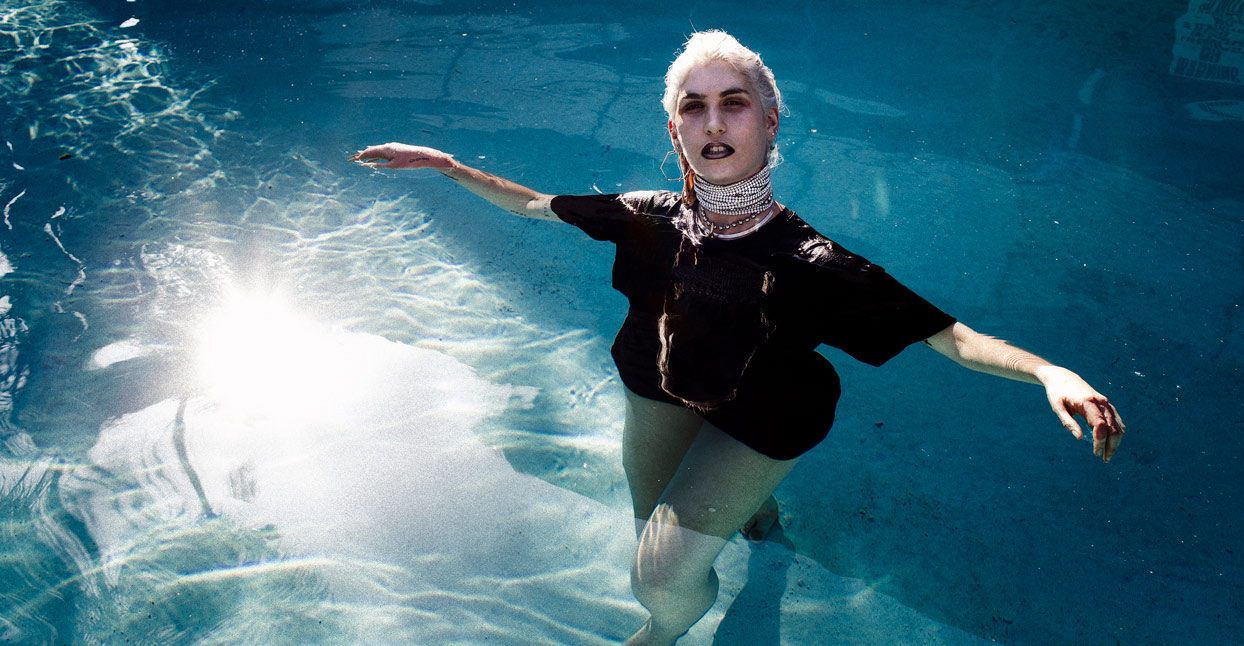 It’s impossible to discuss Eartheater without mentioning horses. The equine motif has turned up on the album covers for Alexandra Drewchin’s last two records—Metalepsis and RIP Chrysalis, both released in 2015—and it rears its head again on the artwork for her new LP, IRISIRI. Growing up on a horse farm in Pennsylvania, Drewchin has long been drawn to the strong, graceful animals. But where the horse photos on her last two records were computer modified, on IRISIRI, Drewchin’s first LP for PAN, that modification falls away; in its place is a candid picture of herself guiding two horses back to a stable after a photoshoot that lasted a couple of hours. “The photo wasn’t me posing,” she says. “I was there to do a shoot with [the horses], but at that moment, my friend Elise [Gallant] just snapped the picture. That’s the one that made it, because I’m actually leading them. Horses are very intuitive. Where you move, they move, and how you move affects them, too.”

Drewchin has been doing quite a bit of moving herself over the last few years. Her vast skill as a vocalist and multi-instrumentalist have led to collaborations with percussionist Greg Fox and guitarist Bernard Gann (and occasionally others) as part of the experimental psych group Guardian Alien. She’s also worked with industrial hip-hop group Show Me The Body, activist and hip-hop artist Bunny Michael, and experimental duo LEYA. And though she began by playing violin at a young age, she has since picked up guitar, synthesizer, and “can express [herself] on flutes and other stringed instruments.”

Her first two albums as Eartheater were cyborg concoctions combining both organic and synthetic sounds. Drewchin spliced string instruments (guitar, cello, violin, piano) with beats, synthesizers, and her own alternately eerie and playful vocals. A song like “Put A Head In A Head” on Metalepsis managed to be both hypnotic and sparse, using just guitar arpeggios and her own voice for the rhythm. On the songs where drums did show up, they were often subdued, as on “Humyn Hymn” and the meandering, string-heavy title track from RIP Chrysalis.

By contrast, the more abrasive IRISIRI is full of percussion. Album opener “Peripheral,” a ballad plucked out on a harp, is the song that most directly recalls her earlier material, and the album’s most straightforward listen. Then, things change. Within seconds of track two, “Inclined,” Drewchin has broken out a rattling drum machine and crying violins. By the time her woozy vocals kick in, it’s clear that the simpler, poppier melodies of her earlier works have been banished from IRISIRI.

There’s a lot of “new” on IRISIRI, a fact that might have cowed other labels. But Bill Kouligas, owner of PAN, was unperturbed. “I knew Bill was right for this record immediately, because he wasn’t scared of it,” Drewchin recalls. “A lot of people were hitting me up, trying to hear this record, but it’s not a consistent Eartheater Barbie Doll to put on your shelf. There are a lot of wild cards on this record, and Bill was totally with it—super enthusiastic.”

The record that Drewchin originally sent Kouligas is not the same as the final version; the tracklist went through multiple revisions, primarily because Drewchin curated the songs on IRISIRI around a single mantra. “Everything had to relate or equate to my ‘C.L.I.T.’ theme—‘Curiosity Liberates Infinite Truth,’” she says. “C.L.I.T.” is inherently tied to IRISIRI, but it’s also personal. “I’ve realized that I’m a slow learner,” she admits, “but only until I’m actually curious about something. When I’m interested in something, I completely embody it. Maybe it sounds corny to say ‘Curiosity Liberates Infinite Truth,’ but it’s real for me. I have a lump in my throat even talking about it. I was told I was stupid so many times when I was young, and I had terrible test anxiety. I scored so poorly on standardized tests, but I played violin very well in my youth orchestra, which is where my heart was. I was figuring out ways my chemical computer processes information.” Drewchin wrote dozens of songs that never made the final cut because they didn’t fit that theme. “Songs that I felt were there to encourage me to take care in how I think and nurture my mind—those songs made it onto the record.”

The album cover, as well, falls under Drewchin’s mantra. “The horse symbolizes [the idea of] intuition within the ‘C.L.I.T.’ mantra,” she says. The difference between forced learning versus personal discovery is profound. The path to truth is one of personal determination, and can be explored and experienced as the traveler sees fit.