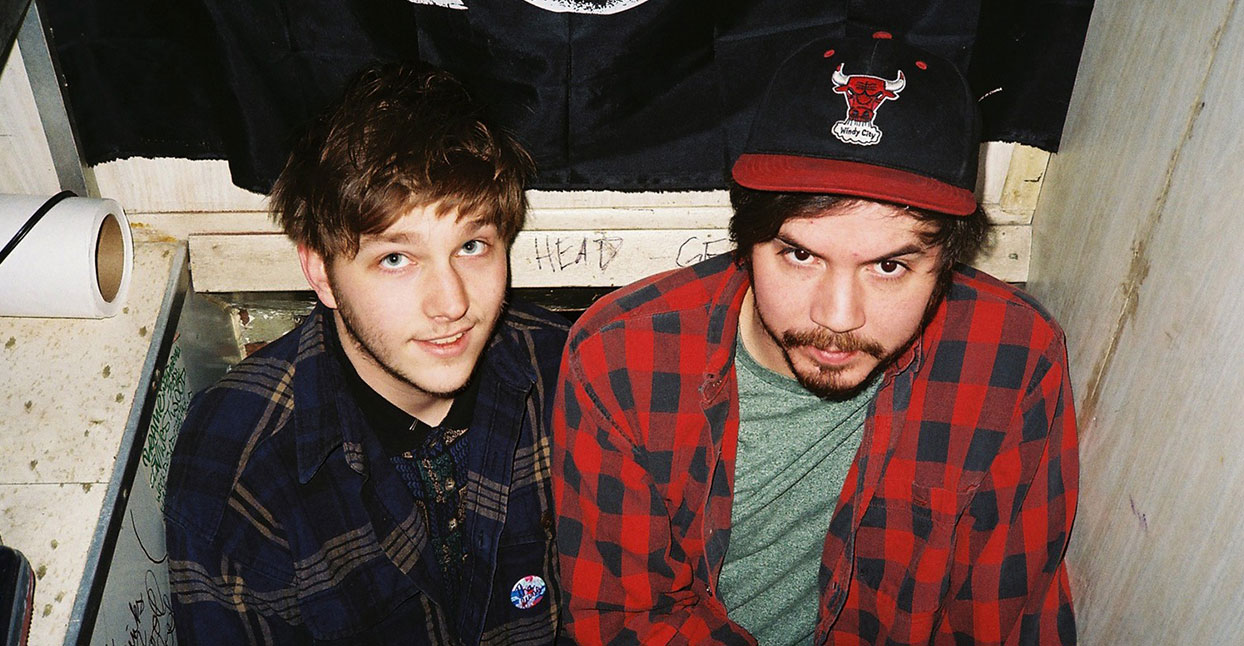 Anyone who purchased the vinyl version of Tunn Star, the hypnotic new record from Chicago duo Earring, would be forgiven for thinking they were playing it at the wrong speed. Opening track “Dark Star” doesn’t even crawl—it practically comes to a dead stop. The guitars are pitched down to subterranean levels, and Jason Balla’s vocals are so deep, low and forlorn they make Stephin Merritt sound like a soprano. All of this is key to the record’s deep power: its songs ooze out slowly, grim and grimy, with enough blank space between the drum beats to fit a whole other song inside. According to Balla, all of that is by design. Rather than make a record that punishes with heaviness, Balla and Alexander Otake instead wanted Tunn Star to mesmerize with slowness, sucking listeners into its bleak world like a sleeping man disappearing into quicksand.

On the eve of a summer tour, we spoke to Balla about the creation of the record, how slowed-down rock music can cast a spell, and why he lugged his gear up a mountain to play a show.

You’ve talked a little bit in interviews about your fascination with hypnosis, and about the link between hypnosis and music making. I’d be curious to talk a little bit about the points of overlap between those two things for you.

The main thing is that [with this record,] we were trying to speak to people on a different level than the typical, ‘Oh hey I wrote this song.’ It’s supposed to be much more about the experience, being taken through something. Which is why we used some elements of drone and repetition and stuff—to evoke that. So it becomes more about the process and being in the song, rather than listening to these specific songwriting devices. You just kind of get lost in it.

It sounds like you’re trying to approach some kind of spiritual way of writing music. A lot of what you just said is a lot of the same reason people recite mantras—to try to access this deeper level of emotion through repetition.

Yeah, totally. It’s kind of trying to speak to some animal understanding of what we go through. We try to put it into words as well, but it’s a neat thing when you can express something without relying on eloquence in language. It’s something you can recognize, but can’t quite put your finger on.

I almost feel like there are really two levels of being hypnotized. There’s the, ‘Go see a magician and he puts you in a trance’ kind of thing, but then there’s also this existential type of hypnosis, where you can fall into these periods of depression or dislocation. You’re conscious, but you’re walking around in a trance. It’s like there’s this wall between you and the world around you. That, to me, is the kind of headspace in which this record exists—that glazed-over, walking-dead feeling.

I don’t know if I’d ever put a general emotion around it, but we’ve both definitely come in and out of periods like that in our lives. I think it’s more just an overarching feeling that we share solidarity with—that even when things are going great, there’s this recognizable feeling that’s always there. It’s what you let yourself fall into, in some ways, as a default. Whereas in the example of the magician, you have to submit yourself to the act of falling into something. It’s an agreement you consciously enter into.

There’s a lot of interesting juxtaposition going on throughout the record, even in some of the song titles. With “Smile Like Hell,” you get both the optimism and the nihilism in just a few words.

I’ve always been interested in that. You can be having this intense, dismal conversation, or things can be happening around you, but you can be laughing at the same time. That’s the messiness of living, I guess. It’s kind of neat to try to embody both of those things. It was funny—the other night we were playing a show for a bunch of college kids, and we were playing one of our more dreamy, romantic songs, but these kids started a mosh pit. Which is not even something that ever happens to begin with—every song is so slow. I looked up and thought, ‘This is so nice. These kids are taking the sound and the heaviness and noisiness, and were saying, ‘This is our response.’ Meanwhile, because of the lyrics I was singing, I was playing the role of some kind of fucked-up Andy Williams or something. But it can be both things at the same time.

That contradiction is really interesting. There’s an actual, documented response in some people where life stress can become so extreme that their involuntary response is to start laughing, because their body doesn’t know what the hell else to do.

Yeah, it’s kind of this absurd-but-nice release from all of the stuff that’s surrounding you. It’s almost pretty in a way.

You’re based in Chicago, and I know the DIY scene there has been experiencing a lot of upheaval lately. One of the spaces where you practiced and played is shutting down, which seems to be something of a common story across the country. How much of the record came out of seeing your world and your community changing like that?

It was at least partially a response to that. The whole record was made at the same time that we were solidifying ourselves in that world, and beginning to branch out into playing in venues like the Empty Bottle. We were growing up and growing through different sized spaces. Now that there are quite a few more spaces closing, it’s been pushing us to play in bigger venues. That’s almost been beneficial, because we’ve been writing with those kind of larger spaces in mind. We can play a bit more dynamically in bigger rooms, and it doesn’t have to be turned up all the way. It allows us to be a bit more expressive in our playing, because it doesn’t have to be at full volume, blasting everyone out.

I’ve often heard musicians talk about ‘playing the room,’ as if the room itself is another instrument.

Totally. I read the David Byrne book How Music Works, and he talks a bit about that—how chamber music evolved because of the situations it was being performed in. But it’s freeing, because playing in a room with a PA, you realize, ‘Oh, I don’t have to yell all the time.’ We can play quietly and loudly and the difference between the two is more noticeable.

Speaking of site-specific performance: you recorded Tunn Star in a house in the middle of winter. How did that impact the shape of the songs?

It’s hard to say. The songs were already there, but the way that we play has always been a little tricky. How do you make something that sounds a little bit broken already sound good enough to play for someone else? We were recording in our friend’s living room, basically, in the middle of winter, so it was super cozy. We were in an environment that allowed us to be very much ourselves and very vulnerable—you’re at home, you’re not under the microscope you would be if you were in a fancy studio. In fact, in a studio, you’re almost literally under a microscope, because you have the engineer on the other side of the glass watching you and listening to all of your little mistakes. This way, we were able to include all of the messiness that I think gives it charm.

I’m stuck on the image of the engineer watching you from the other side of the glass, because I read an interview where you said that as you were recording, you were watching people outside through the window walk by in the snow. It’s almost like you were the engineers in this scenario, and the people outside were who you were controlling.

Totally. It’s super funny—the house we were playing in is in a pretty pleasant neighborhood, and you’d watch these people walking by and kind of looking in thinking ‘What is going on in that living room?’ You’re trying to make something tender, and you’re just seeing all these people outside fighting the cold.

You’ve hit on the note of ‘tenderness’ a few times, which is interesting to me, because for me when I listen to the record, I hear a sense of desolation.

That’s part of it, but I think the other side to it is that it’s meant to have uplifting moments. It’s not all despair. Which is, hopefully, how life goes. It can be kind of a bummer, but there’s a lot of good things to find, too. It was fun recording in the winter for that reason—everything is really cold in Chicago, and people don’t do a whole lot. They’re just bundled up, sitting in their home. That’s kind of a fair analogy for the music we make—it’s supposed to wrap you up, and you can just sit inside it.

A song like “Slow Mud,” which is one of the ones I really like, I listen to it over and over and I can’t make out what you’re saying—a lot of the vocal is just texture. Did you deliberately obscure the vocals.

I think it’s the same thing we were talking about earlier—trying to make something that speaks to the animal nature. The sounds that you hear can be recognizable, or you can pair them with some sort of sentiment that should be familiar already. You hear this noise and it’s just familiar in some way you can’t put your finger on. That’s the main reason. And that’s just the nature of the way I sing, even if it didn’t have affected vocals. We played on a mountain once for this show in New York. We hiked up with a guitar and a few drums, it was more stripped down than we’d ever played. And I was just singing with no microphone or anything, and my friend still couldn’t make out what I was singing.

Wait, you hiked up a mountain to play? How did that come about?

A friend of ours does this thing called Mountain Shows on this Mountain called Mount Taurus, which is an hour outside New York City. A bunch of people from New York would hop on a train and meet at this pizza spot, and then you’d take this six-hour long hike to the top of the mountain. Then, on the hike down, different people would perform at different spots. They’d play at burned out houses or a weird bunker—there’s basically a bunch of ruins perfectly spaced-out on this hike. A lot of the people we played with were doing ambient noise stuff or acoustic stuff, so it was the perfect setting for both of those.

So you hiked six hours with all your gear and then you played? Or did you have alternate transport up there?

Oh, no—the hike itself only takes an hour, but you keep stopping on the way down for these mini shows. One thing I will say is that you don’t realize how heavy your gear is until you’re carrying it a mile straight up a mountain You realize, ‘Hmm, we should have re-thought this.’

As far as I can tell, Tunn Star, which is the name of the record, is the name an oil company based in Myanmar. I couldn’t tell if that choice was deliberate, because the image of oil in a pipeline, thick and black and grimy, kind of overlaps with the record.
That’s amazing. I should have looked into that! The title for us is just being multiple things at once—looking up into the celestial but also down into the muck. Oil is a pretty good one, though! Unfortunately, I don’t think we’re political enough to pull that off.