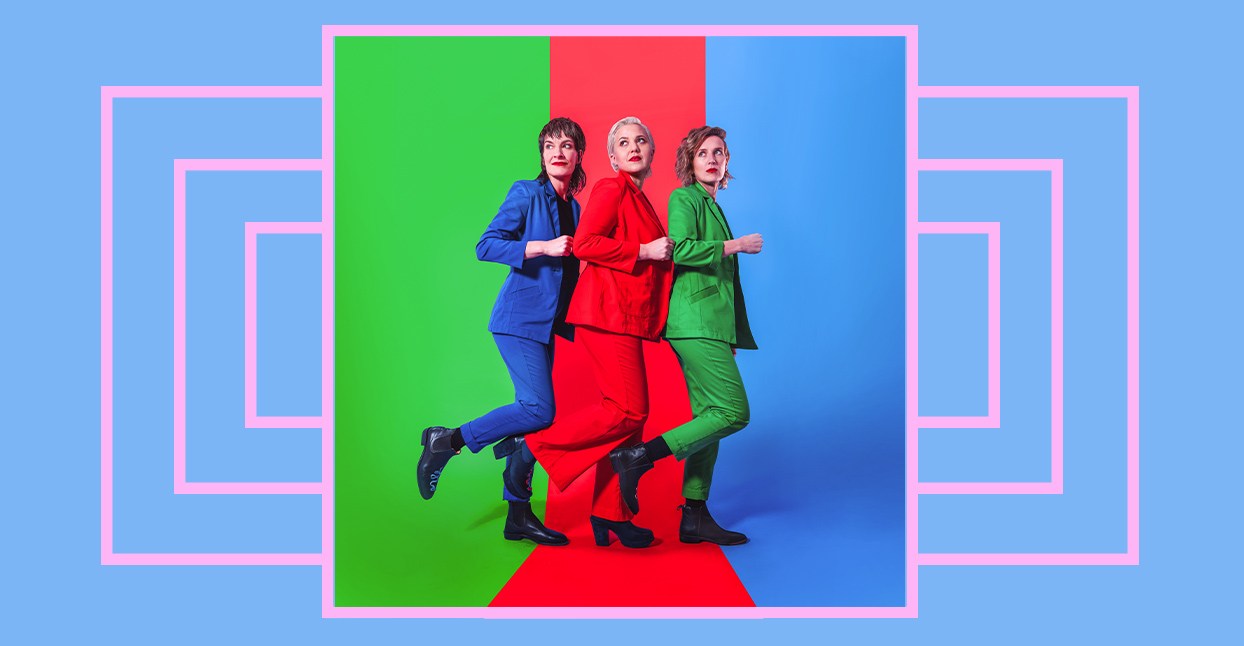 Longtime fans of Australian music are in for a delightful surprise the minute they press play on the new album from the Melbourne trio Dyson Stringer Cloher. Just a few minutes into the first song, amid crunchy, overdriven guitars, comes the lyric: “…Jodi Phillis, Trish Young turned things upside down….” The song is about The Clouds, a beloved but perpetually overlooked Sydney band from the ‘90s. The song, called “Falling Clouds,” details not only the ways in which the group opened doors for artists that followed, but also how their contributions are barely rendered a footnote in music history: “Underrated, overlooked/ A woman’s work is never done, or it’s erased from history books.”

“Jen [Cloher] wrote that song,” explains Liz Stringer, over drinks at a suburban Melbourne pub a couple of weeks later. The song details Cloher’s experience of seeing The Clouds and fellow Australian ’90s band Falling Joys as a teenager. “It was the first time she’d seen women playing rock ‘n’ roll. And it just blew her mind.”

“Falling Clouds,” is the first single from Dyson Stringer Cloher’s self-titled debut album. And while the word “supergroup” (usually followed by “of sorts”) is overused, what you should know about Dyson Stringer Cloher is that it is a group of three women — the third being Mia Dyson — who are each successful artists and excellent songwriters in their own right. (Milk! Records, who released the new LP, is co-owned by Cloher.) The trio played together for part of 2013, recording an EP and following its release with an extensive tour, before going their separate ways again.

Now, in 2019, they’re back together. “Over the last six years, we weren’t 100% sure whether we would ever pick [the group] up again,” Stringer admits. “But Jen suggested it and it just felt like a good time for all of us: a natural point for all of us in our solo careers where we were between albums. It’s important to rotate the crop a bit in the creative arts, and it presented a good way to do something that could take the focus off all of us individually—which I’m always really happy to do.”

The presence of three strong songwriting voices in a band is rare, albeit not uncommon; some of that may be due to the potential for conflict, but it’s more likely because proficient songwriters don’t grow on trees. Either way, the songs on Dyson Stringer Cloher present a best-case scenario for a band with such a wealth of talent: each writer’s voice is clear and distinct, and each seems to benefit from the input of the others.

“That’s one of the great things,” agrees Stringer. “Bringing in all these other perspectives and angles that you don’t have in your own set of skills. And I really enjoy not having to drive every song. I do a lot of session work, and I really enjoy being able to add to songs, rather [pushing] the. I don’t miss singing whole songs, either: I really love arranging backing vocals and all that stuff. So on a performing level, it’s great.”

Some songs on the album are recognizably the work of one writer: Stringer’s sardonic but philosophical “Too Seriously,” Cloher’s reflective “Young Girls,” Dyson’s racy “With My Hands.” Others reflect the album’s egalitarian songwriting split: two songs each, plus four collaborative efforts. The arrangements and variety of styles on display reflects the composers’ diverse musical backgrounds. “The One Who Leaves” echoes the folk stylings that both Stringer and Cloher have explored over the years; “With My Hands” displays Dyson’s impressive guitar chops; the final track “Can I Borrow Your Eyes”—one of Mia’s—is almost a spiritual: a gorgeous a cappella piece characterized both by the tonal differences between the three women’s voices, which, by the end of the track, merge into a single, harmonious sound.

At the other end of the stylistic spectrum is the second single, “Believer,” a snarling rocker. It’s another Stringer composition, and in the band’s press material, she describes it as “classic Oz rock… you can take the girl out of Melbourne, but…”  Its video has also turned heads: directed by Melbourne filmmaker Annelise Hickey, who also made the video for “Falling Clouds”, it plays out almost like a documentary, following 16-year-old Australian Rules footballer (and Cloher’s next-door neighbor) Lulu Beatty through a training session.

As Stringer says, the video really “captures a moment”: women’s Australian Rules has only recently gone professional with the launch of the AFLW (Australian Football League Women’s), which played its first season in 2017. “When I was first pitched the idea,” Stringer says, ”I was concerned. I was like, ‘Well, that’s not really what the song’s about, guys!’ But it’s up for interpretation, and I can see why [Hickey] got that sort of aspirational feeling from the song.”

She laughs. “I mean, the voice of the song… it’s in true Liz Stringer solo fashion, very spiteful and cynical. But that’s why it works, [contrasted] against the awesomeness and the triumph of this young person. I’m a huge football fan, and since the AFLW came in two years ago, it’s a really amazing time for women in general. People have told me that they get quite emotional watching the clip, and it is because it’s just something that is so new and so exciting.”

If the memories of hope and possibility related in “Falling Clouds” (“You kicked the door wide open/ So I could walk onto that stage”) are occasionally laced with bitterness, “Believer” portrays a more optimistic future. (Stringer notes pointedly in her blog that “The fact that we ourselves are now visible and consistent contributors to the Australian and wider musical landscape as three women over 35 is a flag that we fly with extreme pride and a role that we take incredibly seriously.”)

“I put out my first record in 2006,” she says, “and in that time, the number of women—young women playing instruments, particularly—has quadrupled. The older we’re getting, the more people are coming up behind us.”