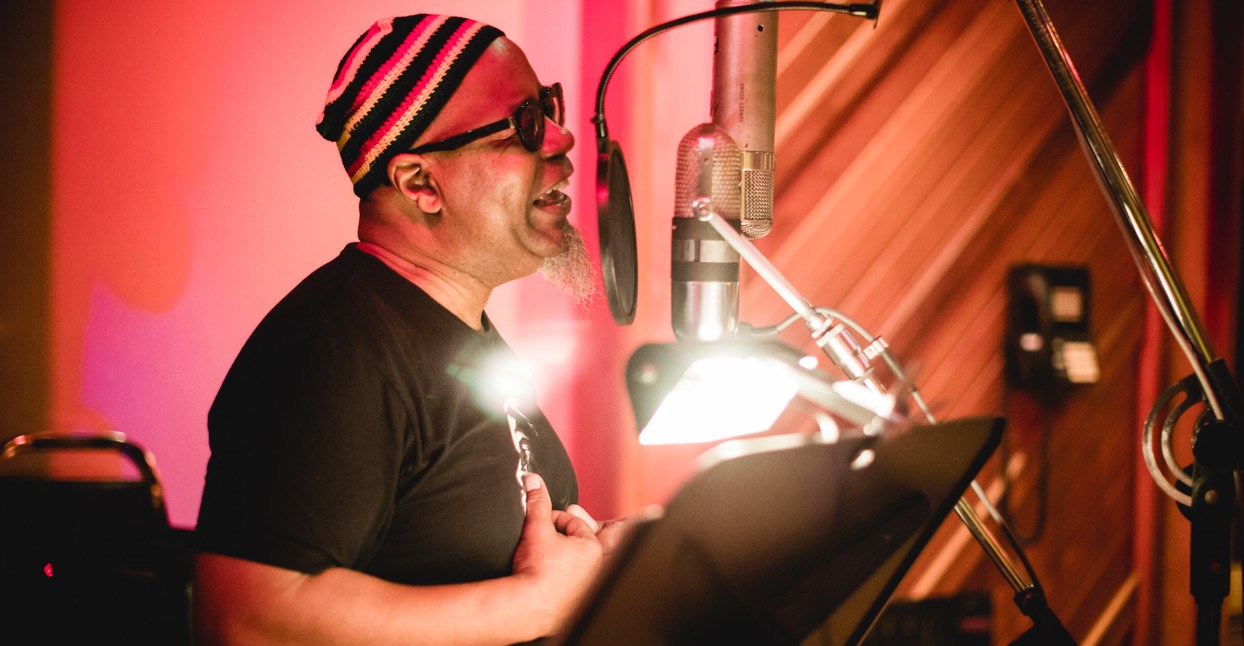 Vocalist Dwight Trible has also recorded “Mothership” twice. The first was on his solo debut, the aptly named Horace, released in 2002. The second is the opening track of his latest album—also called Mothership—which features a ferocious tenor saxophone performance by Kamasi Washington. Mothership also includes a version of “Desert Fairy Princess,” by Jesse Sharps, formerly of Tapscott’s Pan-Afrikan Peoples Arkestra.

In the 20 years since Tapscott’s death, Trible has been one of a group of L.A. musicians who have dedicated themselves to keeping his musical legacy alive, and preserving the communitarian spirit that he brought to that city’s jazz scene. His work with Tapscott’s Arkestra, which still performs, is particularly close to his heart.

“I think this is the fourth generation of the Arkestra,” he says. “After Horace passed, Michael Session took over and was leading the group for several years, and now his son, who’s a drummer named Mekala Session, is leading the Ark, and he’s bringing in a lot of his friends from UCLA and Cal Arts and all that stuff…you’ve got these young people that are still excited about this music and see the importance of this organization. So now the Ark is probably as vibrant as it has ever been. It’s a beautiful thing.”

Trible moved to Los Angeles from Cincinnati in 1971, enticed by the sunny paradise he’d seen watching the Tonight Show. With little formal training as a singer, he drew inspiration from soul and jazz performers like Aretha Franklin, Linda Jones, Betty Carter, and Mahalia Jackson—as well as his own mother. After visiting his sister in a hospital while still living in Cincinnati, he went to a Richie Havens club gig on a whim, hoping for nothing more than to take his mind off his troubles. “I had never seen anybody give as much as this man gave,” he recalls. “When they talk about giving 110 percent…he was not a fabulous guitar player, he didn’t have a great voice, but he gave so much and he had so much heart. When I saw that I said, ‘That’s what it takes to be undeniable.’”

Some of Havens’s hoarse, impassioned delivery is present in Trible’s singing. His deep voice has a theatrical, declamatory quality, allowing him to instill even the corniest lyric—like “What The World Needs Now Is Love” from his 2017 album Inspirations—with genuine emotion. On Mothership, tracks like “Mother” and “Brother Where Are You?” are delivered with tremendous power, Trible’s voice sliding up and down the octaves, and wrapping around the words like a snake coiling around a tree branch. His backing band includes pianist Mark de Clive-Lowe, bassist John B. Williams, and drummer Ramses Rodriguez, as well as harpist Maia, viola player Miguel Atwood-Ferguson, and percussionist Derf Reklaw (a friend and collaborator for decades), among others.

Though Trible’s been performing in L.A. for over 40 years, his career shifted into a higher gear at the turn of the millennium. Over the last two decades, he’s made eight albums under his own name and appeared on dozens more, including critically acclaimed albums by Kamasi Washington. In addition to being the vocal director of the Pan-Afrikan Peoples Arkestra, he’s also the executive director of the World Stage, a performance space and community center co-founded by drummer Billy Higgins and poet Kamau Daáood in 1989. Trible was part of the groups Build An Ark and The Gathering, all-star and multi-generational assemblages of West Coast players, and performs regularly with Pharoah Sanders.

His music doesn’t just cross genres, it crosses generations as well. His 2005 album Dwight Trible & The Life Force Trio was a hip-hop project that featured tracks produced by J Dilla, Madlib, and Georgia Anne Muldrow. “She’s kind of my niece,” he says of Muldrow, “because her father was my best friend. So I’ve known Georgia since she was about three years old…I’m known as Uncle Dwight.” While he doesn’t see a direct connection between the spiritual jazz he usually makes and the conscious hip-hop of Dilla and Madlib, he’s up for anything—he’d like to make a full-on funk album one of these days. “I’m always honored when the younger folks ask me to do something with them,” he says. “It’s just like, if you think I can do it I’ll certainly try.”

Trible’s voice has also crossed generations because of his work with Kamasi Washington. He’s the lead male vocalist on 2015’s The Epic and 2018’s Heaven And Earth, and also sings as part of the choir on the earlier album. “You never know what effect you’re having on people,” says Trible. “I’ve known Kamasi since he was a young kid, and you see [people] around, and you try to be nice, and you never know what it is that they are formulating and putting together. All of those guys that are with [Washington’s cohorts] the West Coast Get Down were always around the Leimert Park thing…I just used to see Kamasi and the Bruner brothers around, and they were always very respectful and all that, and now…the guy is a force to be reckoned with.”

“Sometimes I kinda wish that, when he wants me to do something, that he would give it to me in a timely fashion where I could learn it a little better, rather than learning it on the spot,” Trible says with a laugh, “but again, I’m very honored that these young guys feel enough about me to ask me to be on their music.” While he’s unlikely to yield the stage himself anytime soon, he clearly feels that the generation after him understands the importance of keeping the L.A. jazz scene unified and community-oriented. Horace Tapscott’s vision—one shared by Trible, Derf Reklaw, Billy Higgins, Kamau Daáood, and many, many others—is alive, and in good hands.