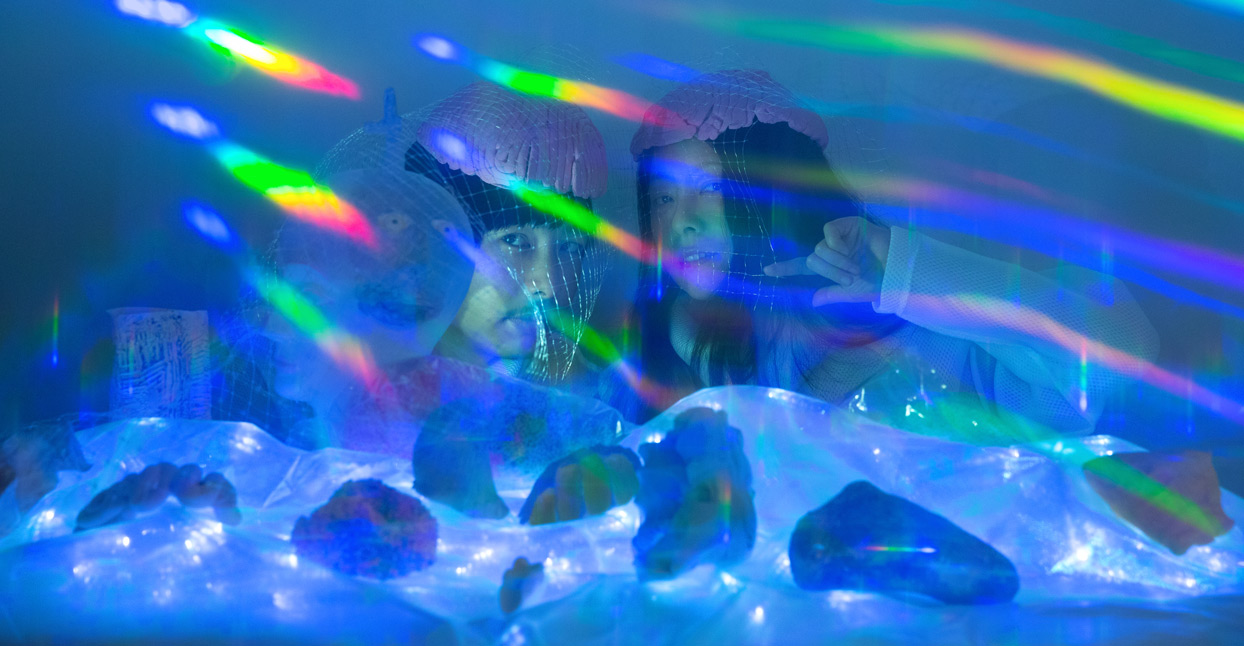 To speak with Dustin Wong and Takako Minekawa is to speak with one person. Part of this is because Wong does most of Minekawa’s Japanese-to-English translations—aside from the occasional interjection or giggle—but there also seems to be a high level of psychic understanding between them, a characteristic that permeates Are Euphoria, their third record as a duo.

While their first two albums—2013’s Toropical Circle and 2014’s Savage Imagination—are both strong, Are Euphoria takes the duo a step above. Perhaps it’s the three-year gap that led them to this enlightened place, or maybe there’s a new level of comfortability that didn’t exist as strongly prior to Euphoria. Either way, Wong and Minekawa have created one of the year’s best experimental albums, mixing pop sensibilities with rhythmic loops and kinetic percussion.

Soon, they’ll be bringing their tour to the U.S., showcasing these songs for an entirely new audience. Not surprisingly, there are broad cultural gaps between the DIY scenes in Japan and the U.S., yet Wong and Minekawa find merits in both. In Japan, Wong says, “they’re more respectful. But in America, they can show their feelings to you. You quickly understand whether they like you or not.” It’s hard to imagine too many American audiences disliking Wong and Minekawa, though. From their home in Tokyo, the duo spoke about their creative evolution, why performing in their home country can be lonely, and how collaboration begets sonic transformations.

This is your third full-length as a duo. Were there any perceptible changes or new goals you aimed to achieve this time around?

Dustin Wong: It’s been a development from the second record. We took our time, and we consciously made a [point of that].

Takako Minekawa: On the first two records, the moment we finished a song, we’d record it and put it on the album. There’s a ripening process—when you finish a song, it’s not quite ripe yet, it hasn’t really realized itself.

Wong: With this third record, we developed it and let it sit. We played a bunch of shows—maybe a year and a half of the same songs. After that, we decided to record it. The songs are situated, and we [were] used to them. We [knew] the tempos and feelings going into the recording session.

Minekawa: We [were] soaked in it.

The record is very dense and loosely flowing, from idea to idea. How prepared are these songs when you begin to record them?

Wong: We don’t really talk about it. We don’t talk about the music-making process. What we talked about in the very beginning was how we were going to create the music. It wasn’t necessarily about what, but how.

We set up all the equipment—the keyboard, the drum machine, the guitar, my pedals—and we were trying to figure out how we would incorporate all of these into the effects pedal and the loop pedal. We focused on making it in sync so we could loop the vocals and the instruments on the same grid. We wanted to paint on the same canvas. It was more about figuring out how to make an interface that allows us to make music intuitively and on the fly. All of the songs for this album were created through improvisation and memorization.

What sort of method did you end up settling on to convey the songs most easily?

Wong: The gear that we use. If you can imagine train tracks or highways merging, at the end it merges into one. That’s how we incorporate all of our elements. In the very middle of our set up, we have a mixer that merges our instruments. We’ll start improvising and jamming. We’ll record everything if it’s interesting to us. There were a lot of sketches that were never used or didn’t end up on the album. We tried to pick out the best parts, then we started developing and refining—taking out the unnecessary things or quickening the pace by taking out a few unnecessary elements. The lengths of the songs reflect the amount of layers we’re preparing and playing on top. On the album, you’re hearing exactly what you’d hear at one of our shows.

That reminds me of some of the solo stuff you used to do.

Wong: Yeah, in a way the structure is very similar.

You two are touring the U.S. pretty soon. I’m curious if there’s a difference performing in Japan as opposed to the U.S.?

Wong: I feel like, in Japan, the crowd is a lot quieter.

Wong: [In America], there’s a sense of  communication going on between the person on stage and the people watching. Sometimes, in Japan, I feel a disconnect, where the performer and audience aren’t there in the same space. The audience observes, and the performer is a specimen.

Minekawa: It feels lonely sometimes up there on stage. I feel like a lot of people are confused by our music [laughs].

Has that impacted the way you perform in Japan?

Minekawa: I’ve gotten a lot more used to it. On stage, now that I’m used to it, I can be in my own space.

Wong: I agree. I feel like we can be in our own space and be open to each other. That’s the benefit of having each other. We can support each other on stage.

Minekawa: Even though the audience is quiet, maybe after the show a couple people may come up to me and express how they feel opened up. Someone recently told me they felt like they could sense another world when they heard us play.

It seems like the DIY scene in Japan has had a profound impact on your music. What’s so inviting about that world?

Minekawa: It’s a very disparate and isolated scene. It’s mostly individuals or small groups of people doing their own things. A lot of times they don’t really communicate with each other. We don’t really belong anywhere.

Wong: We’ve been able to play shows with a bunch of different types of bands. Sometimes it works and sometimes it doesn’t. I feel like the underground here is so underground that a lot of people don’t get acknowledged. It’s isolating, but in a way, that allows people to find their voice and their expression. When all of the ego stuff is put aside, you can really see the place where you want to head, expression-wise or creatively. You see that in artists and musicians here. That’s very inspiring to witness, to see that they’ve found it and they’re doing it.

Dustin, having been a part of the indie scene in America and then having these albums out on Thrill Jockey, do you ever feel disconnected from the scene in the States?

Wong: Sometimes. This is very embarrassing, but the other day I was on Facebook and I realized there were a bunch of messages that I haven’t read from [that were sent] years ago. There were maybe 20 or so, all pending messages. They were from a bunch of people telling me that they went to my shows and they really enjoyed the experience. I replied to these messages a week ago and apologized. It was really touching at the same time, though.

Takako, after your early days making music, you took time off before you began collaborating with Dustin. Now that you’re back in it, has your approach changed regarding making music?

Minekawa: In the beginning I verbally explained my ideas to musicians. I would say, ‘I wanna do this, I wanna try this.’ All of those ideas would go into the recording process and created in the song, but I had a hard time translating that into the live performance. At the time, I didn’t enjoy performing live for that reason. Since collaborating with Dustin, I’ve gone through the transformation to writing songs for performance. We’re in a practice space practicing songs so we can play them directly on stage. That allows me to think in a different way. It makes me excited to write the next song so I can perform it.

Matt Papich is a frequent collaborator of Dustin and he co-produced this new record. Are Euphoria is perhaps a bit hard for an outsider to penetrate. What did he bring to the album?

Minekawa: The album was pretty much done when Matt came in. He gave the sound its dimension. There are different points in all the songs where he would add flair, through his perspective of what he was hearing. It was really fun working with him. His sense of humor—he has a poignant sensibility. We’re both big fans of his.

Wong: I’ve always enjoyed his music and he’s such a fascinating, intelligent guy. He has such interesting and ‘out there’ ideas. He added a new space to this record that I’m really happy with.

For example, what he did on the second song ‘Benbelo’ was a sort of automating reverb effect. He had a pretty long reverb track that he would fade in and fade out. It would expand the space you were listening to while constricting it at the same time. It was a sort of flux. In this three-dimensional reality that we’re in, that’s an almost impossible thing to create: a room that can become bigger and smaller. He added another psychedelic element that’s surreal yet also lucid. I really enjoyed that about his additions.

Dustin, a lot of your solo music is also heavily-looped based and focuses, in a way, on the act of a single person creating these sounds. Does having a collaborator make this approach tricky?

Wong: It took a lot of effort. It’s interesting. When I switched from solo to duo, my brain needed a little bit of time to adjust. I could feel the wrinkles emerging in my brain when we began making music. It took effort, but now it feels like second nature. Once we get our equipment set up it feels very natural.