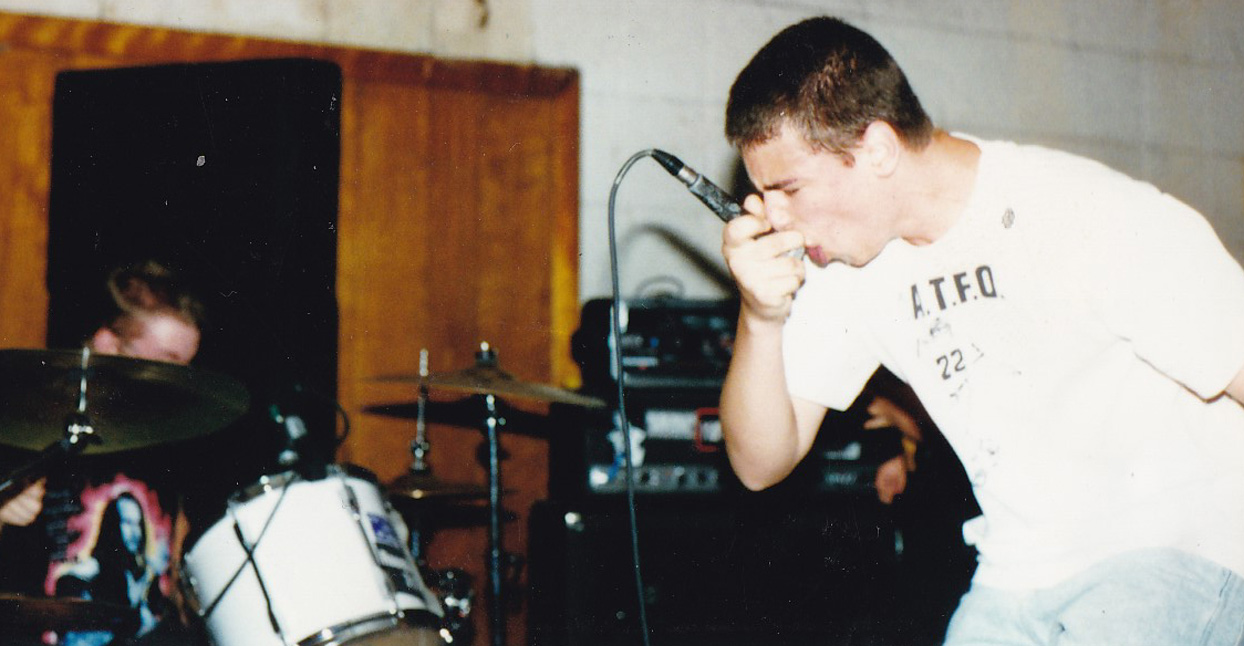 In the mid-to-late ’90s, while Chicago was the musical center of attention, suburban scum dogs were also raising a racket in a variety of venues outside the city. Within the “Chicagoland sprawl,” these “venues” were things like storage spaces, unfinished basements, vacated houses, sports complexes, and small record stores. They were micro-scenes bustling with life, and DuPage County, in particular, was producing bands at an alarming rate. There was straight edge hardcore (Last In Line, Strength in Numbers), unhinged powerviolence (Landmine, Kungfu Rick) and a veritable smorgasbord of different types of metal.

The fertile ground of the ’97-’98 era also sowed the seeds for future, more prominent musical acts. “1997 and ’98 was the ‘first wave’ of bands that eventually led to bands like Weekend Nachos, Spitalfield, and Rise Against,” says Dave Hofer, more commonly known to friends as “Hoffa,” who drummed in many of these bands and was a ubiquitous figure in the suburban DuPage scene. “Looking back, it was nowhere near the ‘first wave’ of suburban punk bands, because there was quite an active suburban scene before us, but there was zero [social] connection outside of the records.”

Hofer goes on: “We were from the same area as bands like Ivy League, Gauge and Silence [members of which later went on to form the lauded Chicago hardcore band MK-Ultra], but those bands were all five or more years older, so it’s not like our scene was born from theirs or anything. You can see a much more direct connection between bands who were active in the late ’90s and the present day than you can bands from the early to mid ’90s and today, probably because of the Internet.”

This was not the cultivated, po-faced, poised, working-class punk and hardcore Chicago was known for, but rather a sort of Gremlins-esque blossoming of a group of wise-ass kids prone to heckling everyone (in a good-natured manner) at shows, forming bands based on the Jerry Springer Show (aptly and creatively named “Springer”), and writing death metal tributes to their high school band conductors (Gravemasters’ “Gary”). Chicago acted as a hub to see touring bands, but for those living and creating in the suburbs, there wasn’t an aspiration to be a “Chicago HC band”™.

With his enormous Bandcamp archival project, Hofer’s attempted to distill that sprawling scene digitally, uploading piles of tapes, records, and CDRs. It’s a feast for the eyes and ears: not just a portal to the past, but a wondrous survey of all the kooks pumping out music in and around the area during the late ‘90s. It was a time when mockery was good-natured and commonplace. “Our whole scene was about fun. I mean, when you’re jumping around in a barn, in the mostly-affluent Chicago suburbs, singing songs about street hockey kids that won’t move when you’re trying to drive down your street… come on. We were smart enough to know our place,” Hofer says.

The DCHC project sprang from Hofer’s time as a freelance writer. He was recording all his interviews at the time on cassette tape, and rather than having these interviews decay and be lost to the arrow of time, a friend showed him how to digitize them. “As I was weeding out the interviews from my other cassettes, I started thinking that I could do the same thing for some of my old band’s demos before the tape rotted away. Then I had the idea to post the demos on Bandcamp in case anyone from that era wanted digital copies. After that, it was off to the races,” he says. When asked if nostalgia played a role in the digitization of his hardcore archive, he replies, “Nostalgia plays a little part, sure. But the main idea is the preservation of the material.”

Hofer isn’t attempting to compile a comprehensive discography of DCHC with the Bandcamp page; instead, he’s doing his best to represent what was going down at the time based on what he personally owns. “I don’t have a checklist of releases, so I can’t really ask people for specific titles,” he says. “I’m mostly mining my own collection, though a few friends have lent me releases to include. I’m open to any contributions that fit the bill.” A couple of notable bands from the time without official recordings, according to Hofer, are Leper and Hook, the latter of which was pirate-themed metal insanity. (Video footage does exist.) The drummer once “swabbed the deck” between songs, producing a mop from a bucket nearby and slopping up his drums with mop water.

Like many hardcore scenes, the DCHC crew was overwhelmingly white and male. “Hardcore appeals to hormonal boys because of our raging testosterone, of course,” Hofer says. “Looking back, I was such a fucking spazz, with a lot of energy going every direction at once. During the pre-2000 era, I can’t think of a single band in our scene that had a woman in it. Eventually, some bands like The Further Along and the Lapis Sanctuary formed with female members, not to mention Yak Spackle, whose front-woman was [writer and director] Diablo Cody. Pretty bizarre.”

The response to Hofer’s efforts has been positive, and while he can’t include key releases because they are still in print (Kungfu Rick’s Motivation to Abuse is notably absent), he’s attempted to best represent the scene as it existed with what he has. Individuals scouring the Internet for recorded material from the halcyon days of DuPage hardcore will certainly be satisfied with Hofer’s work. “Recently, I got an email from a guy who is from Downers Grove and discovered the page looking for an early, pre-Victory Records Spitalfield release. He lives in Alaska, now, and was very excited.”

It’s difficult, through the rosy fog of memory, to remember our youth as anything other than ‘the good old days’—especially when it comes to the music we loved as teens. Hofer has a more pragmatic view. He understands the scene’s place and respects it, but he doesn’t let it overshadow the present. “Of course, there’s fond memories, but it would be insane for me to think, ‘Oh, why can’t things still be like that?’ Oh, you mean living with my parents in Wheaton? No thanks! It was an exciting period that helped shape all involved, hopefully for the better,” he says.

Here are eight significant releases from the DuPage hardcore archives, handpicked by Hofer:

The Undesirables, Me & My Three Droogs 7-inch

Hofer: They were the first band from our scene to release a 7-inch on a real label that was recorded at a real studio. I was over the moon to be thanked in the liner notes!

Hofer: This was the first release on DC (DuPage County) Records, and it was financed by our friend Ben, who saved his money from caddying to release it. We were super tight with the kids in Landmine, so this was special for all of us. This actually got reviewed in some zines, which blew our minds.

Hofer: This is a comp that featured four bands who were active at the time: Last In Line, Kungfu Rick, Landmine, and Breaker. Not the greatest material, but our little statement release.

Hofer: Of course, this is a pre-Rise Against band, but even back then you could tell these guys had serious chops. Their songs were way more mature than anything I was a part of, ever, and Tim’s voice has always been ridiculously good. Again, just great people that loved music.

Landmine, The American Dream is in Good Hands 7-inch

Hofer: Released posthumously. This record was Landmine, fully formed. They started off as a jokey grindcore band and evolved over the course of a few years into a real powerhouse. Brutal stuff.

Hofer: This was the final release before they signed to Victory and had some moderate success during the early ’00s emo rush. This was one of those releases where I thought, ‘Whoa, I have very talented friends that are doing real things with music!’

Hofer: These guys were all friends from school who were more into electronic music and therefore created their own, three-piece electronic band using Nintendo samples, drum machines, and keyboards. They only played a few shows, but I was probably at every one of them. I went to see Kraftwerk in 1997 with at least two of them.

Hofer: Another great example of how diverse our circle of friends was. This is a direct byproduct of two guys that were always around, but more into Sebadoh and Husker Du than Project X or whatever. Lo-fi bedroom pop.