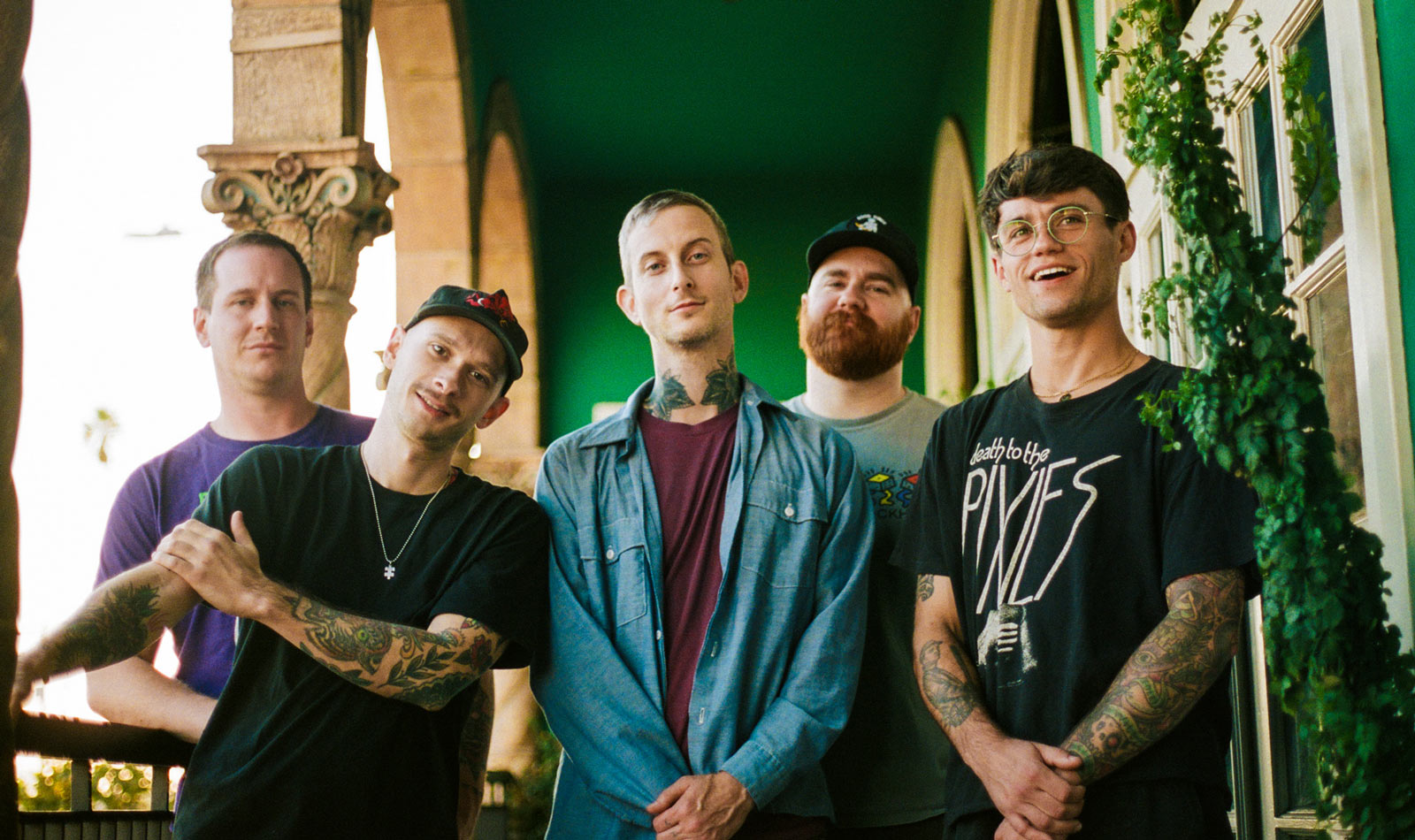 “Write a riff. That’s the fuckin’ song. A song is a big riff and a chorus that doesn’t irritate you. There are varying degrees of a good song, a great song, and a shit song, but without those two elements, it’s barely a song. If you have those, you’re off to the races.”

Patrick Kindlon’s take on songwriting is blunt. It’s also a vast oversimplification of what goes into the process, depending on who you’re asking. But he’s also not wrong: When it comes to his band Drug Church, the big riff is always there. So are layers of feedback, richly produced sonic ear candy, effects, and a guitar tone that sounds like it could split railroad ties, all of which the other four members of the group hone and perfect well beyond that first riff.

Not that the members of Drug Church are always on the same page. They don’t all like the same music, and when it comes to writing songs, they tend to have different ways of getting the job done. They’re also rarely in the same time zone, let alone the same room—Kindlon, guitarist Nick Cogan and drummer Chris Villenueve are in Los Angeles, guitarist Cory Galusha is in New York, and bassist Pat Wynne is in Connecticut. (Not that this is a problem, they note; they never practice until two or three days before a tour.) When I talk with Cogan and Kindlon over Zoom, the difference in their personalities is immediately noticeable. Cogan, speaking from his L.A. home, is relaxed and low-key, while Kindlon, chatting with us from a health food store in Albany, is more animated, prone to giving loquacious responses dripping with cynicism and deadpan humor. It’s only fitting that he also happens to host two separate podcasts.

These contrasts aren’t a hindrance to the way Drug Church operates; instead, they’re essential to the identity of the band. Any given Drug Church song, like the 10 on their fourth album Hygiene, consists of clashing elements working in unlikely harmony—immediacy with aggression, pop hooks with hardcore aesthetics, a melodic foundation counterbalanced with Kindlon’s gruff, barking, sing-speak method. That they’ve been compared to Weezer, Fucked Up, and Andrew W.K. only emphasizes their unlikely sonic collision. Even their blistering 2011 debut Paul Walker was too knotty and tense to fit in alongside most conventional hardcore albums. Drug Church are always reaching for arena-rock glory, but they’re guided by a vocalist whose husky growl and world-weary cynicism lends it an edge that prevents their music from ever truly sounding mainstream.

“[Paul Walker was] just us trying our best to rip off Seaweed and Quicksand,” Cogan says. “We saw a tiny little bit of success with the catchy stuff, but it’s catchy music through the lens of distortion and feedback and stuff like that. I feel like I hardly listen to heavy music anymore.”

By contrast, Kindlon says he pretty much only listens to heavy music, and that paradox is in part how Drug Church ends up making an album like Hygiene. After 2018’s stadium-sized stomper Cheer netted the group greater visibility and critical acclaim, they followed the thread further by streamlining some of the edges and turning out anthems that sound like honest-to-god “hits.” “Super Saturated” blows open with string-bending riffs and ‘90s alt-rock hooks, while the soaring closer “Athlete on Bench”—Cogan’s personal favorite moment on the album—is the band at their most epic and anthemic. “Premium Offer” is even the rare Drug Church song to feature actual vocal harmonies, something that Kindlon contends is mostly outside of his abilities as a vocalist. “We’re at the limit [of my range] right now,” he says. “I only have two notes. But if a song is sufficiently melodic, you can’t do anything but sing over it, or you’ll go to music jail.”

More hard-working craftsmen than off-the-wall experimentalists, Drug Church have spent a decade refining and building upon their aggressive foundation to land on a distinctive hardcore/power-pop sound. Everyone in the band has been playing punk music for most of their adult lives, and few of them count Drug Church as their only musical project. Kindlon has been the vocalist for post-hardcore outfit Self Defense Family since 2003, while Cogan and Villenueve are members of power pop group Pile of Love. Cogan has also put in some time recently with the melodic punk outfit Militarie Gun. That collective experience has led to understanding what works best for achieving their desired result.

The band’s approach to songwriting is siloed, but it has yet to fail them: Cogan and the rest of the group will work on a song until it’s close to being finished before Kindlon even starts to contribute—which usually happens in the studio, while the clock is ticking (he thrives on the pressure). “We don’t consider the vocals at all when we’re writing the songs, so it’s just trying to write music that’s exciting enough if it stands alone as an instrumental,” Cogan says. “It has to have little earworms and hooks and ear candy.”

Kindlon’s presence adds both more grit and fatalism. The self-described “upbeat but incredulous” vocalist doesn’t have a specific agenda as a lyricist. His verses are topical, but not necessarily political, and his reflections will feel familiar to anyone who’s simply trying to keep it together in a world that’s perpetually on the verge of falling apart. Take, for instance, the album’s first single “Million Miles of Fun,” where Kindlon unpacks the constant stress of a 24-hour media cycle, growling, “News flash/ I need news less,” and “I lift my spoon to socket and dig my eyes out” (a parallel to the album’s pupil-on-pulp artwork, an apparently entirely coincidental artistic choice). “I don’t know anyone who doesn’t feel inundated by news or media in general,” he says. “It doesn’t do shit for me. My rent’s still gotta get paid.”

There’s slightly more hope in “Detective Lieutenant,” the album’s prettiest song, shimmering with Cure-like post-punk guitars. On first glance, it reads like a comment on the idea of separating art from the artist; but gradually, Kindlon drills down on the idea that art’s value can only be defined by someone who consumes it, singing, “You’re the one who assigns it meaning/ You live in that space/ You give it joy, anger, hope or despair” and “I won’t toss away what I love.”

“Everybody understands that they are the person who ascribes something value, not the person who made it,” Kindlon says. “Often, the person who made it did it for money. Or maybe they don’t even know their motivations. It doesn’t matter. Every day, you’re using things that have value by virtue of the way you use them. It doesn’t matter who made your home, because you’re the one making memories there. People try to make music different than any other art or vocation, but it’s no different. Those of us that make music make a thing. You take it and you do whatever you want with it. You can love it. You can hate it.

“Somebody told me once that they listened to our music while they sniped people from their base in Afghanistan,” he continues. “That’s not the intended use. That’s not what I wrote the song for. But the thing is, each person has their own utility with each piece of art.”

By the band’s measure, the preference of most Drug Church listeners is to experience the music live, in person, either while tangled in a sweaty scrum or flinging themselves off the edge of the stage. The demographic makeup of their audience, as Kindlon describes it, is “the Venn diagram of people who want to stage dive”: on one side, kids who live and breathe hardcore and probably have Terror tattoos; on the other, everyone drinking in the parking lot before the show starts, all of whom have probably kicked Kindlon in the side on their descent.

A few scrapes are to be expected for a band that’s made their name in DIY punk spaces and among crowds of bruisers. They’re seasoned veterans at this point. Yet aside from moving to different parts of the country, nothing about the way the band operates has changed in the 11 years since they began. Kindlon offers a humble suggestion on how they’ve managed to last so long: “Maybe the reason that we work is we’re boring.”

What has changed is the environment in which they perform and release their music, which has seen increased attention from mainstream thanks in large part to the runaway success of bands like Turnstile. “We’ve watched trends come and go, but there’s nothing you can do about it because they represent a little generation, like five years,” Kindlon says. “We’re more popular than we were five years ago. And that probably has to do with us putting out good records, in my view. But that probably also has to do with the ups and downs of people’s interests and trends. When we started, even if we were as good as we are today, the ceiling was lower, just because people weren’t into the kind of music that we play. You have to make yourself happy, because everything else is out of your hands. There’s a ton of trends and a battle for what this style of music is gonna be these next five years, and if you involve yourself in that you’re gonna go crazy.”

“If you’re trying to catch the wave you probably already missed it,” Cogan adds. “It just so happens that the thing we like and the thing we’re doing is correlating with a natural interest, which is wonderful.”

Even if Hygiene doesn’t resonate with a broader audience, Drug Church did what they’ve done since day one: Make the kind of music that they want to make, without much in the way of big expectations of what happens after they put it out into the world. Drug Church understand what works for them—anything beyond that is just the eyeball on the grapefruit.

“Just have broad ambitions: I’d like to see how far this can go,” Kindlon says. “We got no fuckin’ plan.”