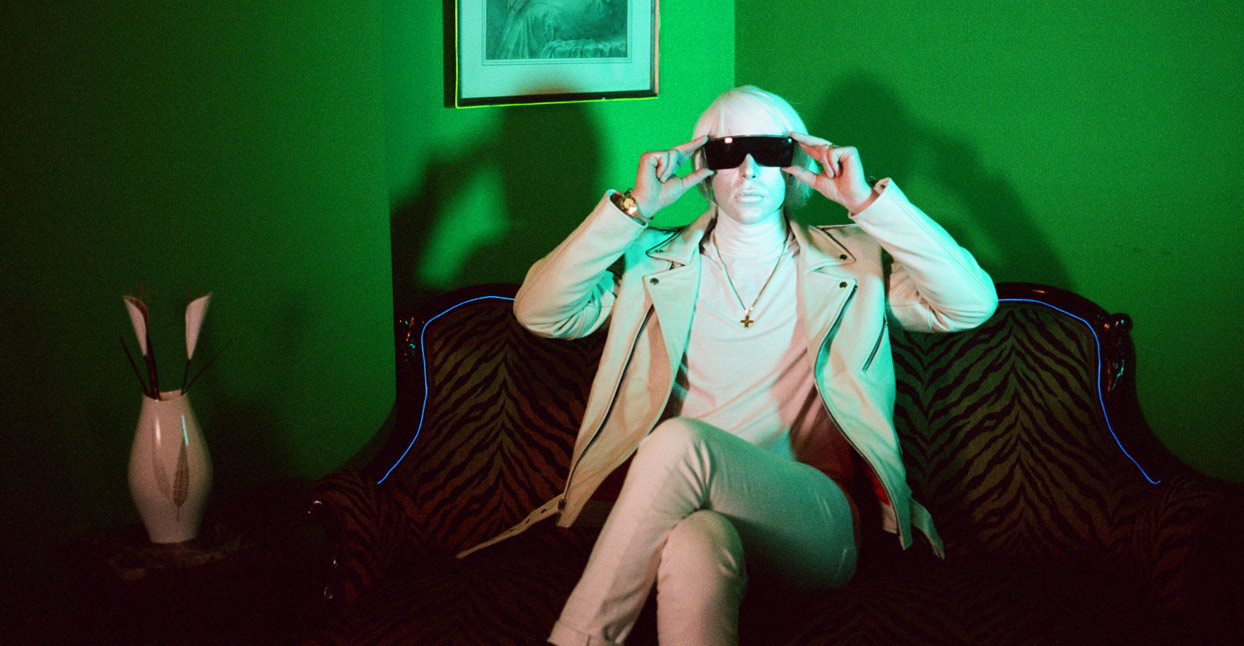 As the drummer for the Los Angeles group Marriages, Andrew Clinco had made peace with his role as a supporting player, providing the backbeat for the duo of Emma Ruth Rundle and Greg Burns. But it wasn’t long before he wanted more. “When you’re a drummer, you’re a drummer,” recalls Clinco, who performs in Drab Majesty as Deb Demure. “Unless you’re Phil Collins, you’re not bringing songs to the table.” And so in 2012, Clinco created Drab Majesty as way to exorcise his creative demons.

Clad in stark-white costumes, and wearing facepaint reminiscent of both Bowie and an escapee from Area 51, Drab Majesty initially just featured Clinco, who stood alone on stage, occasionally “backed” by a bust of Venus de Milo. Supporting slots soon led to headlining gigs in small clubs, which necessitated the addition of a second member, multi-instrumentalist Alex Nicolaou (stage name Mona D). Soon after, those club gigs started selling out, and Clinco and Nicolaou started taking their show on the road. With their new LP Modern Mirror, Clinco is beginning to rethink some of the early limitations he’d put on the project—namely that it wouldn’t have other members.

“It hasn’t been until now that I considered creating a full band, because breaking away from that format was part of the liberation of Drab Majesty,” Clinco admits. “When I’m creating in the studio, guitar parts and vocals are done totally separately. So when it comes time to bring those songs to the live show, it becomes a truly ambidextrous, muscle-memory puzzle.” The ciphers have only gotten bigger and more complex. “I think the next record will be written for a four-piece, or maybe even a five-piece ensemble,” says Clinco. “I’ll probably still play everything on [the record], though. Like Anton Newcombe.”

Modern Mirror was recorded in Athens, Greece; that majestic, storied backdrop is reflected in the album’s lyrics, which borrow heavily from the Greek legend of Narcissus, a beautiful youth cursed to fawn over his own reflection—and his own reflection alone—until the end of his days. Ironically, the fact that Clinco relocated in order to make the record resulted in a social detachment that helped shape the narrative. “The isolated nature of writing the record helped me understand myself as a person in a foreign place, with just my mind and my body responding to the external stimuli of Athens,” he says. “The ideas we roughly lyricized in the demo stages, but the real emotional/psychological impact didn’t fully take shape until I got back home and had fully processed what this stint of productivity yielded.”

Though Drab Majesty’s dour affect and home on DAIS Records sometimes causes them to be grouped in with “goth” bands, Clinco insists that Modern Mirror is not a de rigueur goth record. The occasional shadowy element notwithstanding, he’s right; the album has more in common with M83 circa Saturdays = Youth than it does Sisters of Mercy. Dramatic and heavily emotional, its songs are rooted in classic ‘80s-influenced dance grooves and alternative rock: it’s pop music, built like a classic John Hughes soundtrack. When asked to describe Modern Mirror in terms of the New Order discography—one of Drab Majesty’s biggest influences—Clinco compares his album to the English rock band’s Technique: “That record encompassed a pretty nice swath of styles and is more lighthearted, but it incorporated the melancholy undertones that were present throughout their work. I think if you go back to the first cassette and then forward, that’s where we are now.” Only time will tell if Modern Mirror will be considered Drab Majesty’s Technique. But based on initial reactions—the album landed at #15 on Billboard’s Top Independent Album chart, just below BTS—it’s clear that there are more than enough people ready to follow Clinco on his journey.