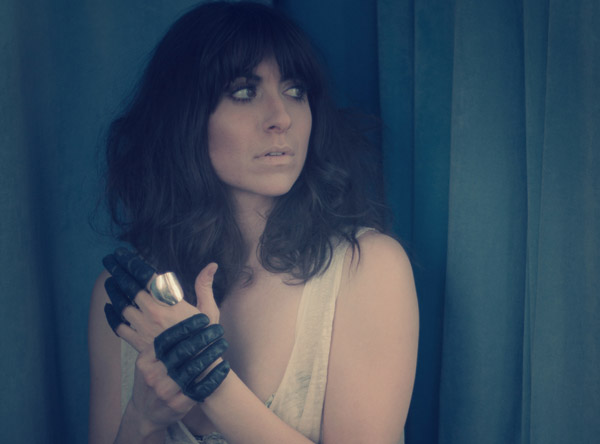 “My biggest challenge is not to be precious… I wanted to write something that didn’t feel overthought.”

Before I call Leah Siegel, her publicist instructs me what not to ask about: “Her dad, Prince.” When I later relay to Siegel my excitement and confusion about these two items being one and the same, she chuckles. Her patrilineage (she’s the daughter of NPR newscaster Robert Siegel) and the fact that the Purple One publicly praised her were easy pegs to hang the first album from, though it’s clear that Siegel would be relieved if people just paid attention to her for the “right” reasons. Her sophomore Firehorse album, Pills From Strangers, goes the distance to ensure that. Siegel’s voice moves from a throaty, husky kind of whisper–as if she’s just been roused from sleep–to a breathy collapse as she pushes her upper register. In between she shouts, roars a little, and lays it on soulful. Her vocal lists towards neo-soul smolder, but is backed with luscious electro-pop.

“My biggest challenge is not to be precious,” explains the singer. Her first album, like most debuts, featured songs she’d honed for years, and was loathe to alter at all during the recording process. This time, not so much, says the Brooklyn-based singer. “I wanted to write something that didn’t feel overthought.” Siegel’s approach verged on first-thought-best-thought. She assigned herself to write a song per day, and not sweat getting it perfect. “Removing the editor was something I had never done. I am used to editing, stewing, contemplation. It was hard to change direction–but I wasn’t really interested in pushing further in the same direction.”

That visceral impulse is all over Pills From Strangers. Siegel’s arrangements are deceptively simple – keys, drums, and a twinkle of guitar here and there. Songs build as her voice back flips and weaves over increasing layers of synth and sub-bass. “I used to start with a lyric,” says Siegel of her writing process for Pills from Strangers, “but I wanted to create more in the studio, work more with rhythm and tempo, and work from the opposite direction.”

On “Any Other Day,” Siegel’s multi tracked vocal rises to a swell over a shuffling beat, following a slinky, skeletal arrangement “I only wanted a lover like you,” she confesses, but she sounds fresh and desperate in the pain, following it with a heartbreaking line that gives away the fact that this is a tale of unrequited, solitary love: “Can’t you find it in your heart to care/a little bit more than you have any other day.” The songwriter is elusive on what her songs are about, insisting she doesn’t want any explanation to influence how Firehorse listeners would interpret them. “I certainly have my private inspirations, but I don’t think there is any great mystery to this record; it’s very honest writing.”

It’s tricky to place Firehorse in the pop pantheon. The closest point of reference might be Fiona Apple at her most outre, Jon Brion’d extremes — Siegel’s voice swings from pathos to lust to simmering rage, but in a different manner. There are shades of Prince’s Parade, but with all the party songs stripped from it, leaving only the mournful sensuality and drum machines. “I don’t know where it belongs. I don’t care. I wanted this record to be great. It wasn’t my mission to have it fit somewhere,” explains Siegel. “I don’t work in a bubble. I do consider my audience, but the thing I think about is ‘Is this exciting to perform?’”

On “Good” she yells, “Never was a good girl.” Amidst the petulance is a sadness in her voice that is perhaps owed to the music she grew up on. “I thought everyone listened to the blues,” she laughs. “I never got home from school and listened to Kurt Cobain. We only had the Beatles, blues and classical music in the house. That was it until Led Zeppelin took over my life.” Siegel has been making and playing music since childhood, playing violin and piano. Later on, her mom taught her “Trouble In Mind,” which galvanized then 12-year-old Siegel. “I knew if I could learn and perfect that song for a year, I could move forward.”