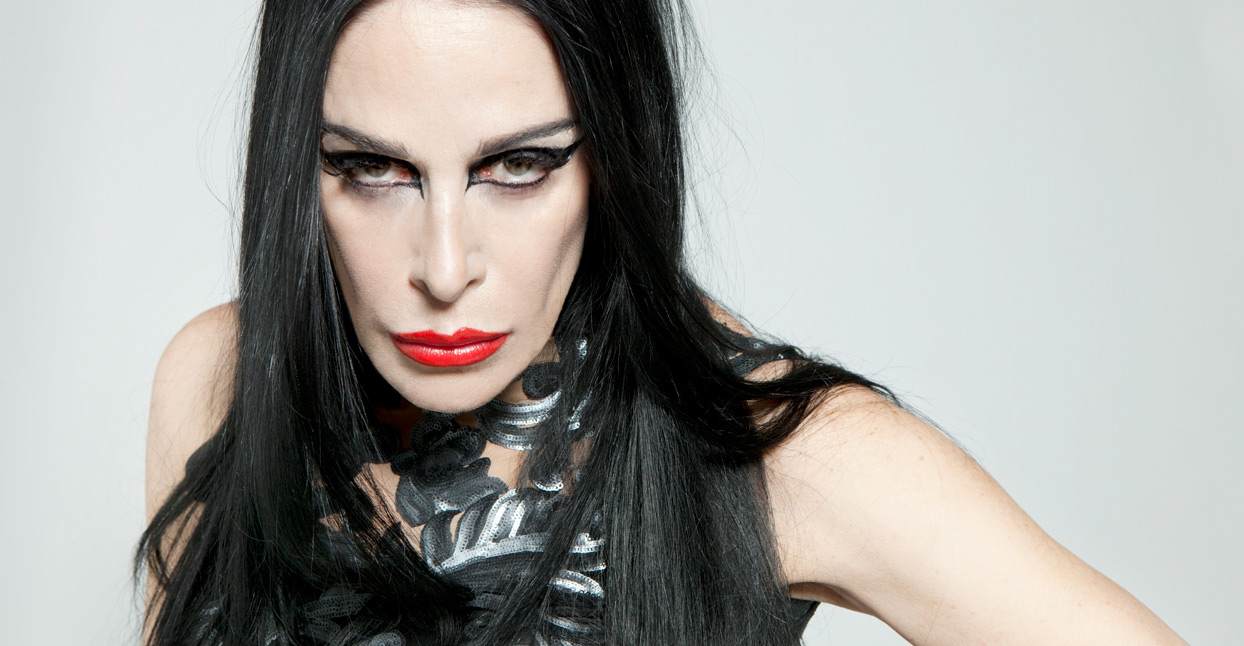 Avant-garde composer and performer Diamanda Galás occupies a distinct place in history; her work is aesthetically unique, situated at the nexus of contemporary classical composition and activism (her music is inextricable from her personal, passionate work with ACT UP!), its threads going back centuries to folk and pop practices from a wide variety of countries. Those whose musical knowledge is not as wide-ranging as hers tend to misunderstand her. This is something she’s understandably furious about, speaking about the critical reception to her new pair of albums, All the Way, a collection of traditional and jazz standards, and At Saint Thomas the Apostle Harlem, a live recording of, as she describes it, “death songs,” from a 2016 New York performance.

She’s speaking specifically about her vicious performance of Thelonious Monk’s “‘Round Midnight” on All the Way: “People who do not know anything about music—notably, most music critics—really should equip themselves with the changes of the original song and realize that every single one of the chord changes I use are connected to the original chord changes. It is not a bunch of keys falling down the stairs, and it is not someone who uses the song to her own ends only to destroy it and desecrate it and dismember it. I’m not doing [that]. I’m using the song and paying homage to what the song is originally about. The problem we have in this society is that those musicians—who perhaps used to be musicians and are now writers—have been replaced by a lot of music writers who don’t know a goddamned thing about music.”

In fact, writers, she says, have been consistently making mistakes about details of her work that are easily researched. “There is a misconception that ‘The Thrill is Gone’ [on All the Way] is the same ‘The Thrill is Gone’ that I recorded many years ago [on 1998’s Malediction and Prayer],” she sighs. “In fact, it was written by Lew Brown and Ray Henderson. It was written by a completely different author. It was not written by B.B. King. It was a funeral party song. But I’ve had at least 10 journalists write about this ‘tremendous power of Galás’s interpretation such that she could take a song like ‘The Thrill is Gone’ 12 years ago, or 17 years ago, and turn it into something completely different,’ and I’m like, ‘You bloody fucking idiots! It was interpreted by Chet Baker, who is completely different from B.B. King. And he didn’t write his song either. It’s bloody exhausting having to hear this kind of shit over and over again.”

The reason Galás is so candid with me is because we spent the first part of our conversation bonding over our shared classical background; she lights up when she discovers that I’ve done a little bit of composing myself, a fact I was nervous to disclose. I mention to her that I’ve gotten a fair amount of pushback from fellow critics because I am a musician. “What kind of crap!” she says. “Because you make music, you’re not objective enough to write about it? That’s like saying to George Bernard Shaw that because he was a playwright, he’s not objective enough to write criticism. That is absolutely historically incorrect. The greatest writers, the greatest critics, have been those who have been practitioners. That is absolutely absurd. Absurd! Because the only other thing you could do is write in endless and tireless simile and metaphor. You know, when a person reviews what I’m doing, like ”Round Midnight,’ I dare anyone to take ”Round Midnight’ and discuss every one of the chord changes I used. I’m not saying you should do that, and you don’t have the time for that, nor the space for it. I dare someone to take the changes and discuss what I’m doing and either agree or disagree. But no, I can barely hope for that these days.”

So we dig a bit deeper, together, into those very chord changes, and she traces the history back for me. “The first three songs [on All the Way], come from the tradition of Chopin, of Liszt, of Scriabin, of Rachmaninov. Those chord changes come from Eastern European and Russian sensibilities about chord changes that were brought to Hollywood by Eastern Europeans who had fled Europe. ‘You Don’t Know What Love Is’—someone should listen to Scriabin before that and after that and see how similar the chord changes are. These composers, most of the bebop players were students of Bach.”

She’s correct, of course; early bebop was considered “musicians’ music,” notoriously uncommercial, distinctly positioned in contrast to the popular entertainment of big band swing. In the 1950s, some composers—Jimmy Giuffre, André Previn—moved to blend jazz explicitly with “European concert music,” combining traditional jazz combos with chamber orchestration. This was an uneasy alliance, and the results didn’t always work—but artists like Chick Corea and Keith Jarrett built out on these efforts to create music that had enormous popular appeal.

This touches on something else Galás is frustrated with—the tendency of critics to describe her music as so avant-garde that it’s inaccessible, when she’s really working with centuries-old pop traditions and raw, universal human emotions. The opening track on At Saint Thomas is the striking “Verrà la morte e avrà i tuoi occhi;” it’s a poem by author (and literary critic!) Cesare Pavese, which Galás has set to an original composition. Pavese, who was associated with antifascist and communist movements before and after World War II (he worked on the Italian Communist party’s paper, L’Unità, after the war), capitulated to lifelong deep depression and killed himself by overdosing on barbiturates in a hotel room in 1950. This poem was one of a handful of missives written right before his suicide; “He talks about how, no matter what you do each day, you look at yourself in the mirror and you see yourself as a dead man. Your thoughts are that of a dead person. No matter what you do, no matter how you try to escape that state, you know you’re already dead,” Galás explains.

For the accompaniment to Pavese’s poem, Galás drew on the 18th century Italian technique of bel canto singing (literally “beautiful song”), which emphasized beautiful tone and technical precision. The style fell out of fashion in the latter years of the 19th century, but was revived in the U.S. in the 1950s (shortly after Pavese’s death) by popular opera singers like Maria Callas, Joan Sutherland, Montserrat Caballé, and Marilyn Horne. It’s an elegant nod to the Italian origin of the music and the Italian-American pop connection. “[‘Verrà la morte e avrà i tuoi occhi’] is the song that’s the least discussed [in criticism of the new records],” Galás says sadly. “It’s the song that’s least understood. It’s because people don’t understand bel canto singing. They think it belongs to a world they’ll never enter, and that it doesn’t speak to them, and that’s ridiculous, because it was the music of the day. The early art songs, it was the music of the day.”

Since classical music is rather class-restricted in the U.S., and so currently unfashionable, it’s important to remember that, from the development of commercial opera in the mid-17th century through the early 20th century, opera was a pop art enjoyed by the masses. “If they didn’t like the singer,” Galás laughs, “they’d throw vegetables at them. They would really communicate and say ‘Ehhhhh! What are you doing!’”

There were no vegetables thrown at the Saint Thomas the Apostle Harlem performance, for which Galás has only praise. “The audience was so splendid, the audience was so empathic, I felt,” she says. “It was possible for me to sing these songs without the comments that imbeciles make. These were very smart people who were at these shows. And if they weren’t, they were cowed by those who were.” (I was at one of the three shows, and I can back up this assertion; the atmosphere in the room was warm and receptive.)

Galás’ music traffics in strong emotion, of course, and always has; this is true of the two new albums, from the elemental sadness of the death songs on At Saint Thomas to the standards on All the Way. “When I did the performance of ”Round Midnight,’ I was in a rage, in an absolute rage, as a person would be at the end of a love affair,” Galás explains. “Even if the love affair is in your own mind, even if it’s not real, it’s still—yes, there’s droll moments, there’s dreary moments, but there can still be a violent rage, like you want to attack the person with a saber. And so it’s in my performance. I did many performances of it that day, and many performances before, but that performance in particular was the one that was closest to the vein on that day.”

Close to the vein: a perfect description of what makes her work so resonant. “Whenever I do a song,” she observes, “I feel compelled to do it. It’s just something that is going on in my life that I want to document—not in such an academic way, in a very emotional way. And I’ve been doing music for such a long time that it comes very easily. I learn the songs [that are not original compositions] very, very fast, and it just happens. You know, a lot of times I think musicians make a big deal out of nothing when they try to talk about how they explain things, and I just want to say it’s like, my hand’s on the table. And there it is. And there’s the truth. It’s like I put a hand on the Bible as well as my hands on the keyboard, and there it is.”