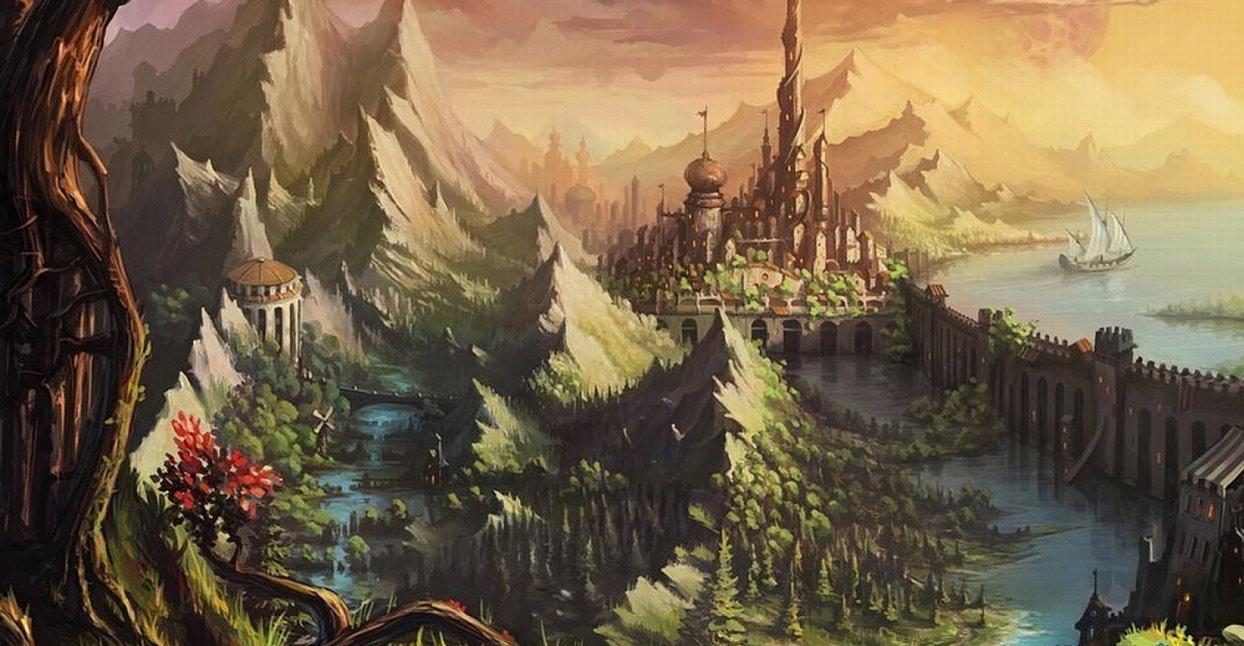 Dungeon synth is a genre long rooted in isolation. In the 1990s, reclusive artists built reputations by releasing demo tapes and records on the fringes, but there wasn’t anything that resembled a community. Looking at dungeon synth in the digital age, it’s clear that people working in this traditionally solitary format are now coming together—over their shared love of fantastical music and imagery—to create something new and bold.

In the past year, French dungeon synth artist Det Svarta Landet (“The Black Land”) has managed to cultivate a unique sound of their own over the course of multiple releases, the most recent of which is a split with fellow French artist Dantefever. It’s a pairing that makes sense: Both are relatively new acts, and both are building their own entire mythologies and histories to go with the high fantasy music they create.

The enigmatic and anonymous individual behind Det Svarta Landet took time to speak with us about the inspirations behind his work in both the realms of high fantasy and music. In addition to shedding light on the particular mythologies and details of the universe he’s created within his albums, he shared some of his favorite artists in the dungeon synth community. He also gave hints as to the future of his musical endeavors, and the stories he seeks to expand upon with future releases.

How did you begin playing music? Is Det Svarta Landet your first musical venture?

I had a very ephemeral musical project a couple years ago. It was named Huvudlös Drömmare and it was a kind of ambient project, something like this. But it was really nothing compared to Det Svarta Landet, and the music is not online anymore. That was personal but very poor actually.

You released two demos before releasing your first proper EP, Beauty of Bulverdoch. While all touch upon the story of the Black Land, what is the thematic or musical distinction between these three releases for you?

As you said, all my music is about the universe of the Black Land (‘Noire Contrée’ in French). Every release deals with something in particular about that universe. It can be a place or an event, or more largely about the atmosphere of something special. My first demo was really a first attempt about composing dungeon synth music. When I discovered that genre, I thought it was perfect to illustrate my universe. So the first demo was really simple, almost minimalist, but I really love the result. I have worked more on Nhervatum, which is about one of the cities of the universe. On that demo, the music is a bit descriptive, because I wanted to depict what the city looks like. And I think I passed a milestone when I worked on Beauty of Bulverdoch. The music is more atmospheric because the EP depicts the atmosphere of an entire island, Bulverdoch, and some tracks are about special events that have happened on it.

Much of your work captures beauty, yet your first demo touches on a history of war and destruction. Is its closing track, ‘Rebirth,’ a hint towards the prosperity and wonder on your other tapes, or is there a darkness yet to be explored?

Indeed, the first demo was a bit more warlike than the other releases. I wanted to paint something simple to comprehend, because war is really present in dungeon synth in general. So that choice is more practical and useful than really related to the evolution of the project. And it was intentional to close the demo with ‘Rebirth’ because as you said, the other releases are about beauty, colors, and peaceful atmospheres. But there is enough calm now, the [darkness] is going to be revealed soon.

There are mentions of royalty and class hierarchy in song titles, possibly lending themselves to signs of civil unrest in dealing with the death of a king. How does the society of The Black Land work? Are there other islands? A main continent? How does their technology vary from medieval technology in our own history?

In the main geographic space, there are three different islands. A very big one, the Black Land (‘Noire Contrée’), that is almost unknown for the people of the kingdom, even if two cities have been built on the coast. And two small islands, Bulverdoch and Meridun, that are the heart of the kingdom. Bulverdoch is the first island on which the colonists have arrived, and this is where we can find Estemont, the capital city. This is a very important place in the kingdom. People in Meridun are often in conflict with people who live in Bulverdoch, but this is more a rivalry than a real aversion. I don’t really know what to say beyond that. I don’t want to give too many details, as it would be heavy. But the technology does not vary from the medieval times in our history. Alchemy is really developed, but there is no magic. At least, that’s what people of the realm think.

What was your introduction to the realm of high fantasy and the music related to it? Much dungeon synth seems to come from old video game soundtracks or Tangerine Dream LPs, yet yours is more lush and pastoral in scope.

At the beginning, I had to get my points of reference in music, so I wanted to compose simple songs. That’s what you can listen to on my first demo. And when I got the basics, I tried to do richer things on my other releases. What you can hear on my two first demos is really different than the split made with Dantefever, for example. I improved my method and my style, so that’s good if you think this is ‘lush and pastoral,’ because I wanted to make music like this. Beauty of Bulverdoch was a bit different, because that release is more atmospheric, and bright somehow, even if a track is about a king’s death. But as I said, the next release will be darker, or just dark.

You recently released Our Ancient Lore, a split with Dantefever. Are Dantefever’s tracks meant to add to the story of the Black Land? How did you approach this collaboration knowing that you had a concept and mythos to reflect?

Actually, Dantefever has his musical universe, and I have mine. He is a good friend, and we were very happy to work together on a split album. Indeed, the whole split is not about the same universe, but I think our tracks fit well together, and I think that’s the best release I have worked on. We have started to compose almost at the same moment, so it was nice to work on a split with him. I really love the atmospheres and the musical work, even if the themes are different for every track.

How did you find Dantefever and begin making music together?

The artist behind Dantefever is a friend I work with on a media project about music. We became interested in dungeon synth a bit at the same time, so when we got enough skills in composing music, we decided to work together to make a split. It was a really nice experience.

Your contributions to the split are more medieval or folk-inspired in sound than the ambient synth soundscapes of your other releases. What was the goal of such a shift in sound?

Initially, I am not a musician at all, so I think this is hard for me to find proper melodies and something that sounds really good. By the way, maybe we can hear it on my first releases, everything is a bit simple. But when I composed the tracks for the split, I had in my mind special atmospheres. For example, for ‘Pelahen’s Inn,’ I wanted something that sounds like an inn, very festive. Conversely, I wanted something very black for ‘They Don’t Know Darkness’ because that track depicts something really sad about the universe. So I have worked a lot to find what I wanted to compose, and I am really proud of the result.

You’ve been working on creating your own fantasy universe. What was the impetus for the decision to create your own folklore—are there writings that predate the music or are they created hand in hand?

For many many years, I love fantasy literature and fantasy universes in general, so you can easily guess that Tolkien’s work has been a huge inspiration for me. But I wanted to have my universe, my ideas, my own features. I don’t blame the artists who keep composing about Tolkien’s universe, because their music is often excellent, but I wanted to take away from it. So I started to create that universe, almost three years ago, and it was really enthralling. I started to imagine, and quickly I had to write about it. So I chose a period in the story, and I started to write pages and pages. And when I discovered dungeon synth music, less than a year ago, I really had to compose something about my universe, because that kind of music fits well with it. That’s how Det Svarta Landet was born. And now I try to write as often as I compose music, even if the themes in music and writing are different. This is a small part of my life now.

What influences do you draw upon when you create music and art? Are you inspired by your own imagination, outside works, or something else entirely?

My own imagination is the main influence when I create music or when I write. My dreams have always been really precise so I had inspiration from them as well. But if we talk about other artists, I think Fief and Mystic Towers have influenced me. I don’t really know because I force myself to compose the most personal music as possible, but I listen a lot to these artists, so maybe I take some ingredients from them. And about writing, Tolkien for sure, but I don’t really know in what dimension.

What was the first dungeon synth you heard? What is your favorite artist or album?

I can’t really remember the very first album I heard, but the first one that stunned me was Within The Land of My Imagination I Am The Only God, by the French artist Erang. I really loved the atmosphere and it was truly like a revelation about the genre. From that moment, I listened to more and more artists and album. I have so many favorites in the genre, but among them there are Splendorius, Rabor, Fief—which is the most poetic to me—and Citadel. I also greatly enjoy Anubis, a new French collaboration project. But there are a lot, really, I can’t choose only a few of them.

There is a very visual aspect to dungeon synth and fantasy—how do you see the visual side of Det Svarta Landet and is it a necessary component to the work you do?

What else can you share about the tales of The Black Land and what is next in store for Det Svarta Landet?

One day, maybe I will be able to share my writings about the universe. Not necessarily a real novel, but perhaps a collection of short stories. I would really love to. In regards to Det Svarta Landet itself, the next release is in preparation. It will be a bit more dark ambient than the other releases, but the dungeon synth style will still be present. I am quite busy at the moment, so it won’t be released before October.