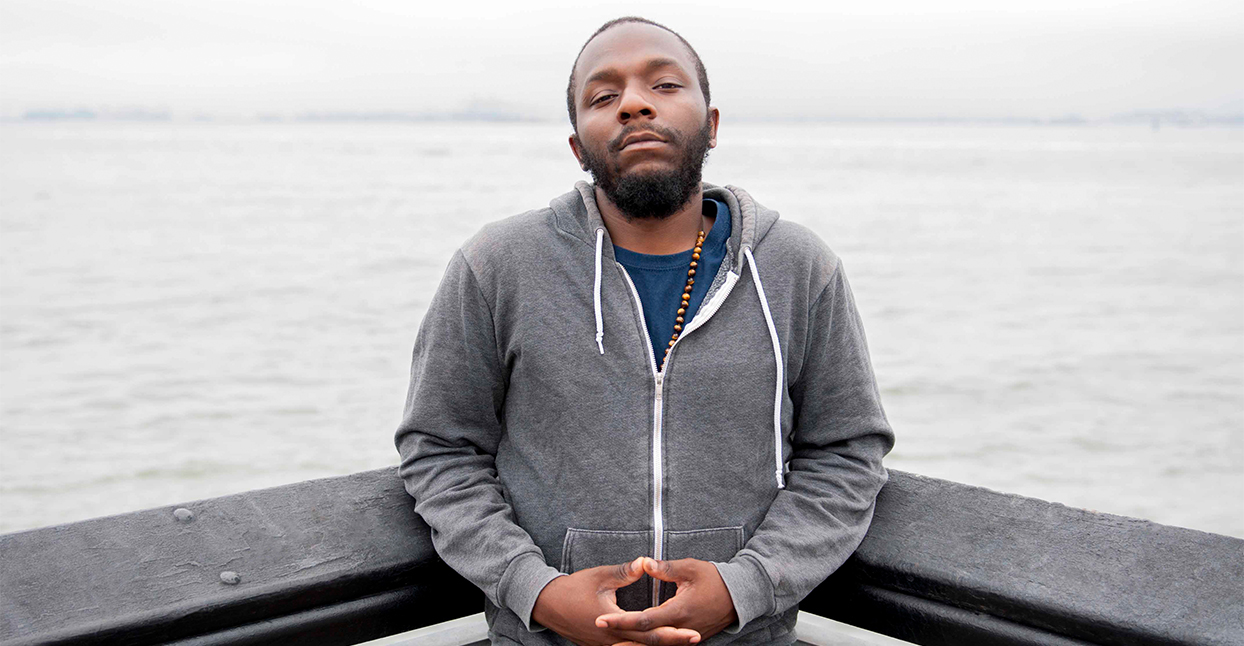 “I don’t want anybody to try pinpointing me. I want to be able to do what I want at any given point.”

In his 2012 video for “Cult Classic,” rapper Denmark Vessey walks through the subway dressed as a fictional cult leader named Dr. Yessev. He’s cloaked in what looks to be a brown snuggie, but rides the train like he’s wearing a suit and tie. Some people ignore him; others look and quickly move away. But Vessey is undeterred, rhyming like he’s in an empty car.

Then there’s the clip for “Do You Believe,” another Cult Classic track: Still in his Yessev getup, Vessey doggedly pursues a nonbeliever, stalking her on the bus and chasing her home. By the end of the video, she’s preaching Yessev’s good word, hypnotizing another passer-by. (There’s even a weird, Kool-Aid-like drink that the converted are forced to swallow.)

There’s also Vessey’s video for “HoeininDaGaddaDaVida,” where he’s in a wooded area, dressed as Adam from the Bible. There’s also someone dancing in a gorilla suit, wearing a feather boa, and someone else in a chicken costume. In other words, to say Vessey is unorthodox would be an understatement.

“I want to articulate the ideas in my head to the best of my ability,” Vessey says. “The illest thing about what I do is expressing myself and, Inshallah [if Allah wills it], making some money off of it.”

Vessey borrows his stage name from a carpenter who was killed in 1822 for planning what would have been the largest slave revolt in American history. Vessey’s music isn’t as revolutionary, but the Detroit-born/Brooklyn-based musician still dissects current events in his songs. “Broken Petal,” a standout from his new album, Whole Food, with Texas producer Gensu Dean, riffs on global warfare and police brutality. “Now how is this some real shit?” Vessey asks. “Now who murders a child in a village? Blacker the berry, more ripe for the picking, heh?” On “Nerd N***as,” from 2015’s Dr. Martin Lucid Dream EP, Vessey points a finger of blame at rap itself: “All you hear in these raps now, is who we killed, who we bodied, the new Bugatti.” But Vessey also isn’t afraid of letting loose. He’s as humorous as he is thoughtful, and sounds natural whether he’s talking politics or warning against the dangers of synthetic marijuana. That dexterity has paid off, but he’s still striving for greater recognition.

Vessey spent the early part of his career as one-half of Crown Nation with fellow Detroit rapper/producer Quelle Chris. After meeting through mutual friends in Detroit in the late ‘00s, Vessey and Chris found they had creative chemistry, and quickly developed a friendship. Vessey often features on Chris’ albums—namely Innocent Country and Ghost at the Finish Line—lending guest vocals and production work. He has one of the most unique voices in rap—but when he started out, he wanted to stay behind the boards. “At the time, he said, ‘I only want to be a producer, I don’t even like doing this rap shit,’” Chris recalls. “I told him, ‘You’re probably one of the coldest MCs I’ve ever met in my life.” In 2012, veteran Detroit rapper Guilty Simpson said Vessey was one of the best underground rappers in the Motor City. MC/producer Black Milk recalls being “blown away” by Vessey’s technique. “Being from Detroit, you know everyone on the scene,” he says. “But his music had the soulful, funky aesthetic and attitude. It was progressive and futuristic in terms of his approach.”

He’s even starting to make waves outside the underground. Rapper Earl Sweatshirt told his Twitter following: “GO BUY MARTIN LUCID DREAM BY DENMARK [VESSEY] IF YOU NEED FOOODD.” That EP was Vessey’s most successful release to date, earning him praise from NPR. “My criteria for emcees is I don’t want to hear anyone else with their style,” says Frank W. Miller, Jr., a graphic designer and tastemaker who released the EP digitally on his Rappers I Know imprint. “Denmark falls in that category for me with DOOM, vintage Nas, and Mos Def, where I wonder what he’s gonna say next that’s clever and conversational.”

On Whole Food, Vessey outlines the peculiar aspects of black life over Dean’s gritty funk-rock and soul loops. “Ode to XX Chromosome” never really takes shape; using a festive 1970s rhythm, Vessey muses in the background in poet-like fashion. “Saturday” feels like a rollerskating jam: dusty drums simmer in the background, a talkbox evokes the spirit of Roger Troutman. Then there’s “Black Love,” a spoken-word piece doubling as a diatribe against law enforcement. “I don’t want anybody to try pinpointing me,” Vessey asserts. “I want to be able to do what I want at any given point. I try to make sure I’m not [pigeonholed] at all.”

As always, it’s difficult to predict Vessey’s next move. If history is any indication, he’ll be witty, insightful and outlandish. Probably all at the same time.