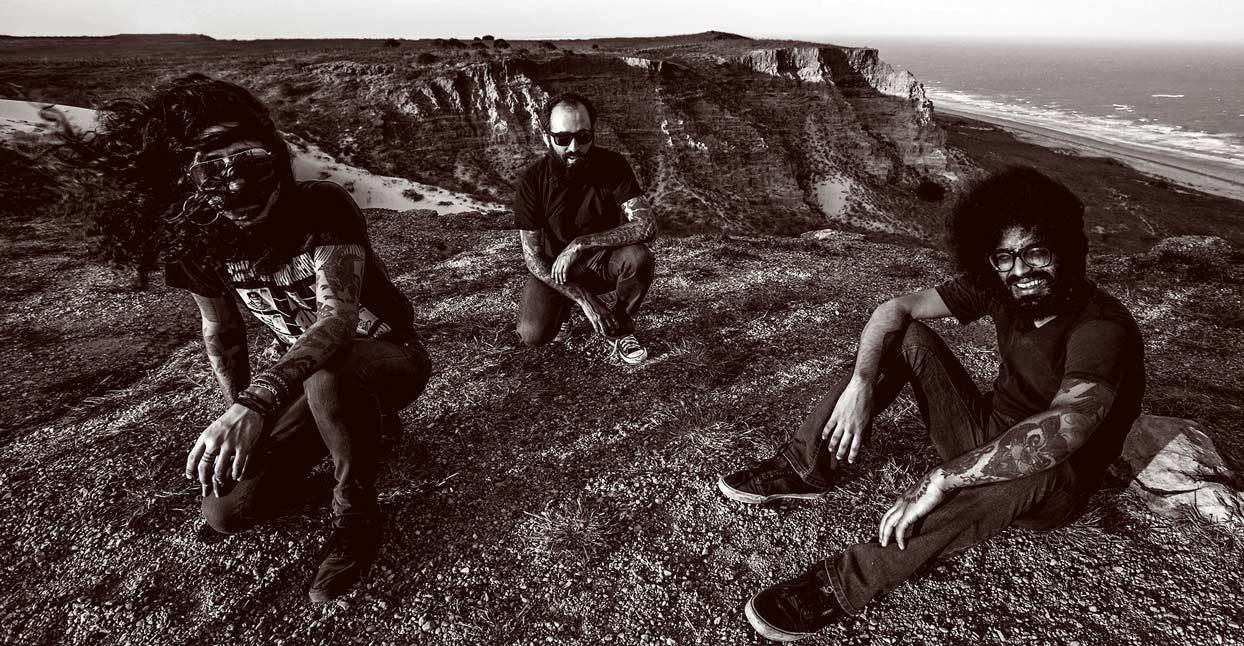 “Most people spend their lives believing that all of their feelings should be expressed only through three or four instruments,” says Deafkids’ drummer Mariano. He’s not passing judgment here; after all, his band’s earliest roots were in straightforward, D-beat punk. Rather, he’s musing on the question of how the heavy music community can free itself of the Eurocentric framework in which it has been forced to operate for decades, and embrace a wider diversity of musical traditions the way that he and his bandmates have done. For a Brazilian band, signed to an American label, who is gearing up to release its third album internationally — and appear at a Dutch festival next month, it’s a question worth considering.

“I think there are many energetic and aesthetic forces that can’t be contained by metal, such as the groove and a more fluid, corporal relationship with rhythm itself, whereas metal is more based on a more rigid corporal and mental stance,” he explains. “To decolonize metal [or] punk, it would be necessary to dismantle such congealed aesthetic forces that prevent us from imbuing ourselves [with] the music of the world, from the music of our own lives and realities—not by directly blending technical aspects, but by diving onto the energetic and more in-depth relationships and connections needed to understand these forms of expression.”

Deafkids’ latest opus, Metaprogramação, is certainly a master class in that kind of genre-agnostic experimentation. The Brazilian trio’s third album (and first studio full-length for venerable label Neurot Recordings) is, in a word, intense. With screaming psychedelia, trancelike dub, undulating reggae, and the work of Afro-Brazilian artists like Djalma Correa, Naná Vasconcelos and Pedro Santos showing up as major influences, Metaprogramação is a head-spinning slab of noisy, experimental punk that label head Steve von Till describes as “sonic Ayahuasca.” One listen to standout track “Templo do Caos” is enough to summon fever dreams; when ingested alongside the album’s 12 other tracks, there’s no telling what it may do.

The trio has come a long way since its gritty, raw 2011 debut, 6 Heretic Anthems For The Deaf, but despite the band’s penchant for obliterating boundaries, Deafkids has also retained its punk aesthetic—particularly when it comes to their percussion, where errant D-beats skip alongside polyrhythmic explosions. As Mariano explains, this, too, is intentional.

“By treating D-beat as a groove, as a firm soil for the trance, we end up creating polyrhythmic detours to it; by inverting D-beat we get other, different beats,” Mariano says. “The power of what’s considered simple is that there lies a ever-growing complexity emerging out of the possible rhythmic permutations that can be done within it. The whole reason for us to do what we do is to explore to the limit this cohesive conflict between past and future.”

Sonic subversion is not their only goal, either. Deafkids has always kept a firm grasp on social and political issues in their work (there’s that punk streak again…) and the ascent of Brazil’s latest leader, extreme right-wing authoritarian Jair Bolsonaro, has left them and many other artists struggling under his nascent fascist regime with a renewed sense of fear—and urgency. Of particular concern is the spread of a toxic government tactic that Americans dealing with our very own homegrown dictator will surely recognize: deliberate misinformation, the corrosion of truth, and the invent of “fake news.”

“Being ruled by military buffoons isn’t something new to Brazilians, but this time, dominance is exerted through the means of a more psychological warfare, one that shakes the very foundation of what we expect from concepts like ‘truth,’ Mariano explains. “I think it impacts us all quite deeply, as we try to regroup and regain the forces to react to it. Everything seems to point to a scene where things like our worker rights will be taken from us, the genocide of indigenous people and the denial of their right to their lands will rise enormously, public policies for urban security and the environment will retrocede years back, as well as the governmental stance towards unprivileged groups.”

When Trump got elected, some American music fans consoled themselves with the idea that, “at least punk will get dangerous again!” Of course, it didn’t, but more artists in various genres have gotten more comfortable talking about political issues, and the metal community in particular has been loudly—and fitfully—addressing its Nazi problem. For Deafkids, who have toured extensively throughout Europe and will play the Netherlands’ iconic Roadburn Festival in April, the opportunity to share their self-described “‘third world’ experiences” through art and music with people in different places and social contexts feels especially pressing.

“We must now think of all the structures embed in our society, in our familiar relationships and in our own minds that perpetuate this type of thing; unless we understand from where this social and personal traumas come, we’ll never be capable of pierce through them,” he says. “We live in a country with a troublesome historical path, when it comes to forced migration, miscegenation, wealth and social gaps. These things are not only major social issues, but they are completely intertwined and entangled. To address such things right now is something almost mandatory.”

This is the reason why so many music industry insiders and fans alike have been flipping out over Deafkids; not only do they have something real and crucial and uncomfortable to say, they’ve figured out a way to say it that feels—and sounds—nothing short of revolutionary.