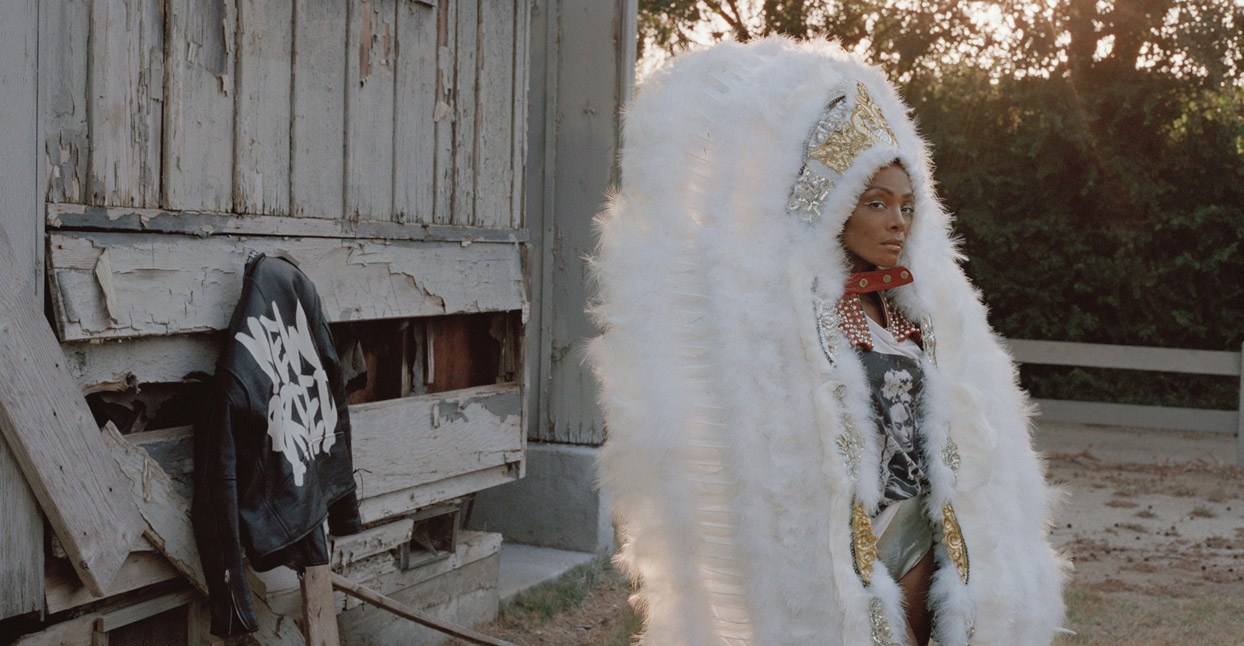 Multi-hyphenate artist Dawn Richard (whose stage name is DAWN) remembers hearing her song, a track from her upcoming fourth album new breed, on an Icelandic radio station. This was a serendipitous moment. The self-proclaimed “girl from the nine” who grew up listening to everything from Bjork to bounce in her 9th Ward New Orleans neighborhood wanted to explore how music industries operate in different parts of the world. Richard was in a rental car she didn’t plan to use, listening to a radio station she wouldn’t have found if not for her quest to find soul music somewhere on the dial wherever she goes. Then, she saw a rainbow appear in the northern sky. “As soon as that happened, Miguel was playing really softly, and then ‘jealousy’ came on,” Richard says by phone from Dubai. “And I had to keep asking, ‘Is that [my] phone?’ It was gnarly.”

Richard’s career hasn’t exactly been linear. After ascending the pop charts with the girl group Danity Kane (assembled on MTV’s Making the Band), and her duo with P. Diddy, Diddy-Dirty Money, she released a trilogy of EDM-inspired avant-pop records independently: Goldenheart, Blackheart, and Redemption. Each album, signified by the colors gold, black, and red, chronicled Richard’s rise, fall, and recovery as an indie artist battling an unaccepting music industry. For Redemption, Richard pioneered an impressive suite of virtual reality videos and became the first artist to perform on YouTube in 360 degrees. Then she burnt out.

“I spent so much money on tech and [had] done all this stuff and I still didn’t really move anywhere. It’s hard to hit mainstream,” Richard says. “When I say I was gonna stop this shit, I was serious. I was really not feeling it.”

In order to find her voice again, Richard spent time in her hometown of New Orleans writing music every day. She also met with some legendary collaborators: PJ Morton, Trombone Shorty, and Solange. “My mom and dad had just moved back, and I realized how much I had missed home and how you guys had no clue who I was,” Richard says. “I was on the road with Danity Kane, but I had no home.”

On Making the Band, cameras followed Richard as she returned to her 9th Ward neighborhood that was ravaged by Hurricane Katrina. With new breed, she takes inspiration from the sounds of her home before she lost it all—R&B, funk, bounce—and most influentially, the voices of the Mardi Gras Indians, who are said to have originated from freed slaves who mixed traditional West African ceremonial clothing with the elaborate wear of Native Americans as a form of appreciation for their help in escaping bondage. (“I told Chief [David] Montana that I wouldn’t do it unless I had his blessing,” Richard says of asking the Washitaw Nation leader to include his community on the album.)

Richard’s connection to Mardi Gras Indian culture, including the ceremonial suits, tribes, and chants, runs deep. Her great uncle, Harold Fedison, was inducted into the Mardi Gras Indian Hall of Fame for hand-sewing intricate suits that can take up to a year to make.

On new breed’s album cover, she even dons a headdress sewn by Chief Montana himself—a rarity for a woman in Mardi Gras Indian culture. Women are traditionally referred to as queens, not kings. “I wasn’t going to wear any other headdress besides that of a chief to speak of the evolution of a woman being a king,” Richard says. When she walks into tech spaces for her animation or music visuals, often as the only black woman, she carries this identity—the king—in her relationship with men. “I see myself as directly equal to you,” she says. “Men have a hard time with that.”

Speaking of male-dominated spaces, Richard also finds herself wielding the most production control she’s had in her career so far, in architecting the sound design of new breed and executing her vision with producers like Derek Bergheimer and Cole M.G.N. “[Title track] ‘new breed’ has this incredible space odyssey influence with it, but the underlying belly is bounce music,” she says. “Sonically, I used some of the synths from Blackheart and Redemption and poured it into the beginning of the album. That’s why ‘spaces’ and ‘new breed’ have a very electronic feel, but never [lose] the grit of New Orleans.”

The frenetic pace of new breed and all of the influences Richard packs in can feel a little dizzying. Rhythmic breakdowns are often juxtaposed with emotional spoken interludes; near the end of the wistful, calypso-flavored “spaces,” Richard trades her laments of a disappointing lover for the sampled oratory of an unnamed man, who reminds the crowd,“…this is about our town.” The sample-driven R&B/funk breakdown of “shades” similarly transitions into a soulful male voice singing, “There ain’t no place in this whole wide world like New Orleans.” Richard’s interludes are a tapestry of sounds, from the Mardi Gras Indians to her father Frank Richard, the lead singer of funk band Chocolate Milk.

“Sequencing is huge for me,” Richard says. “It’s one of my favorite things to do, and it’s one of the most tedious things I do. Because my interludes—everything is interwoven. Most of the time, if you know me, my albums always flow. They never stop,” Richard says. “The Indians are talking about Mardi Gras [after] ‘dreams and converse.’ New Orleans is basically that. We have all these big dreams, but we’re doing it in Converses. We’re doing it in probably the dirtiest sneakers, or the most cheapest, chillest sneakers, but the dreams are massive.”

Perhaps the most revealing moment on new breed is “vultures | wolves.” An interlude about the impact of women in Mardi Gras Indian culture eventually transitions into Richard singing of wolves, or men in the music industry who prey on women: “They showed their teeth like white pearls / Coated with meat / From all the girls / They liked to eat.”

In some ways, Richard is referring to her past. “It’s been a very hard journey, whether it was sexual assault, which I’ve been subjected to—whether it was surviving that, or verbal abuse from my bosses, or to the level of lack of care, or appreciation, or respect, that I’ve not been given by my bosses. It’s been a load of things I seen with men and the way they handled Danity Kane,” Richard remembers. “I just woke up and just decided I’m not going to pander anymore, on this level of ‘I’m going to be grateful…’ No. I work hard. I will be humble, but also be aware that I belong here too.”

Richard’s confidence unlocks a new level of freedom on new breed. Her Goldenheart/Blackheart/Redemption trilogy was rooted in mythological crisis; here, she takes a direct, pop-leaning approach as she reclaims the joy she had before encountering the “wolves” of the music industry. There are songs about sex in “shades” and “sauce,” and then there’s the reckless bliss of “dreams and converse.” In the latter, Richard says “I like whatever I just did” right in the middle of the song. The listener may not be aware of exactly what she refers to, but it’s obvious she had fun while doing it.

By the end of the album, it becomes clear that new breed is about the woman New Orleans helped her become. Richard transforms the kaleidoscope of sounds that New Orleans gave her into her own personal radio station; every song seems to be exactly what she would want to hear. She embraces the full breadth of her sonic imagination and “sits in her sauce,” which is Richard’s favorite way of saying to relish and marinate in what makes you unique. This is in stark contrast to Richard’s persona on Goldenheart, where she sang of fighting so much for acceptance that she sacrificed herself.  “The moment a woman wakes up and says, ‘I’m going to take care of myself the way I take care of others,’ she finds a new love within herself,” says Richard. “And then, she wakes up one day, and says: ‘I’m good on all this.’”