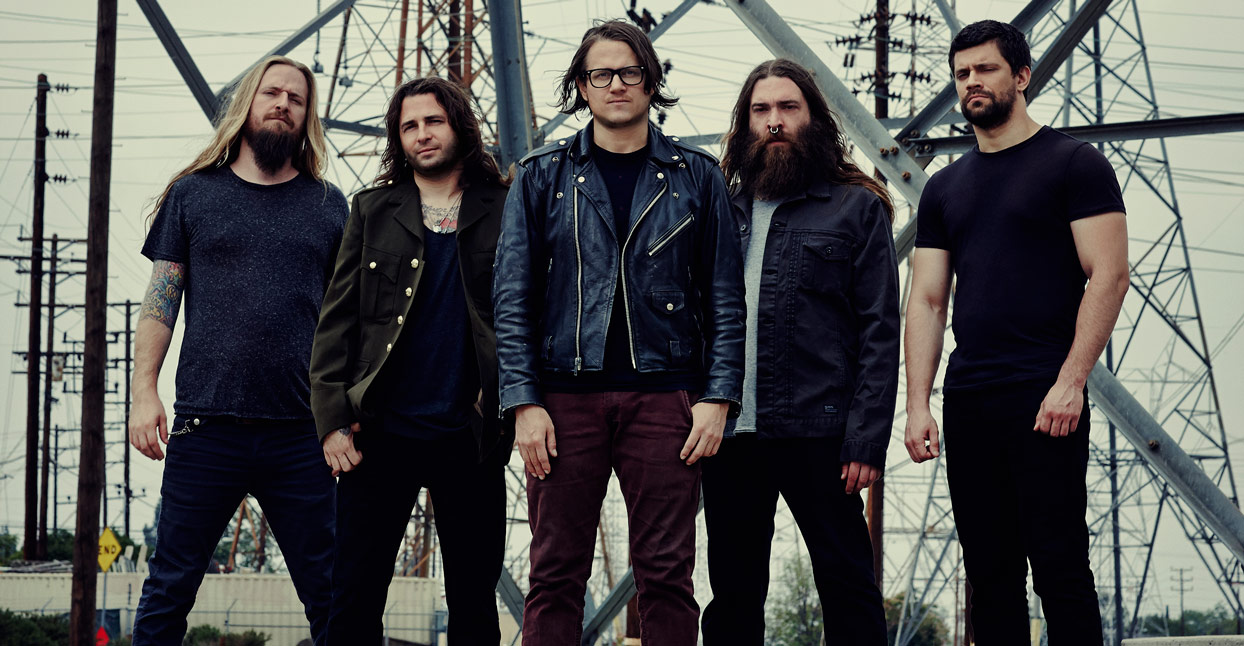 After more than 20 years, DC hardcore outfit Darkest Hour have done something more and more bands find themselves doing: they’ve left the classic record label dynamic and crowdfunded their new release, Godless Prophets & the Migrant Flora. It’s allowed them to connect directly with their fans, and also made more room for family time. They’re now in control of their own destiny, and taking full advantage of it. Ahead of their release, we got the chance to chat with the group’s co-founder, Mike Schleibaum, about crowdfunding, the political climate in DC and, of course, hockey.

First of all, you’re from the DC area and you’ve been living there for a while. So, given the recent political changes and climate, what is it like in DC right now?

It’s definitely an ‘interesting’ time. Trump is here and he’s certainly way different from even George W. Bush. He’s actually around town, and there’s always a gaggle of people around him screaming. When Obama was here, it felt like things were kind of normal. But now, it’s a city of lefties, so we are all pretty up in arms.  For the next four years it’s going to be an epicenter for people to have their voices heard. That’s why it wasn’t made an independent a state, so people will come here to have their voice heard. I guess, all this traffic will bring a bunch of money to the area. People are certainly on edge. So I’m interested to hit the road and hear people elsewhere let me know how they feel. Here, it’s kind of a given that everybody feels the same way—like over 90% of the residents are Democrats.

The riots and the craziness that happened here weren’t really televised nationally. The rioting was like what would have happened after a trial—it was very directed against the government. There was an incident where someone climbed the scaffolding outside the White House and hung a “Resist” flag. That shit was not happening a couple months ago. Everybody was just hoping there weren’t going to be any more terrorist attacks or mass shootings. Now, no one has time to think like that. Maybe we just haven’t heard about it. There have been some terrorist activities with bombings and marines killed in some raids.

I guess, it’s an important time for art in a sense. What is ‘great’ and what is ‘art’ will always be argued. So let’s just hope we don’t blow up the planet.

Certainly sounds ‘different’ to say the least. DC has always had a great reputation when it comes to divisive, heavy music like punk. What was it like growing up around that?

It’s always been really cool. At the time when you had Fugazi and other bands that were selling more records, the attention of the world was focused here. After those bands went on hiatus, the world stopped paying attention, but the community remained strong. It’s weird. It’s hard for bands to come into the scene from outside and do well, but there’s a ton of bands that stay here and do well. Tons of new bands in the hardcore [scene] are really bringing it back to the roots. It’s always been a place where lots of people meet and lots of music is happening. DC is a hub, you know—so many airports and transportation connections here. Like, the city was designed to be a place that people are supposed to protest and gather. When that’s the center of your city, it will  seep into all the art for sure.

You guys still maintain that punk aesthetic in your music. You seem pretty tight as a bunch of friends, and the idea of crowdfunding the album is pretty punk in its own right.

Yeah, man. Even our merch guy, Tito, has been around forever. He drives the van and handles our light show when we play. He just brings a few strobes and some cues with him. He’s a huge part of the band, because he’s the one that got us onto social media. Nobody in the band really likes social media. The internet allowed us to get something called ‘cash flow’ which helps, but isn’t always something artists think about. When you’re on a label, all your merch money goes to the t-shirt company that did it, and then back to the label for all the money they fronted you. This was a way for us to be more directly involved.

So, we got convinced by our manager to crowdfund this one, [and] luckily we had been fucking around with social media long enough that we knew what we were doing somewhat. All comes back to Tito, man. He said, ‘Have you seen this ‘go live’ feature on Facebook?’ We were backstage drinking and [were] like, ‘Fuck it! Let’s go live.’ All we did was drink and be surprised about the technology. It wasn’t until later on we realized it was a really, really powerful tool—to get on there and talk to people and play songs and literally just watch donations come in.

Yeah. we don’t have to tour at all. Pressure is totally off. Now we can do whatever the fuck we want. So, we already sort of won, but we want to give it the same sort of life for the live show. We actually like touring, so we’re hitting the road just because we want to do it.

But you’re a parent now. That must change things for you and make touring, being away from home and just the rigorous lifestyle and unorthodox hours that it takes pretty difficult, no?

Yeah, I got just one kid right now. There’s this great anecdote about the guy who created Calvin & Hobbes. He was illustrating for this huge company, but he would have to commute all the time and never see [his] kid, so he decided to stay home and illustrate his comic book so he could be there for his kid. Similarly, by selling the studio I had in Bethesda and keeping the band streamlined, so much happens at my house, and I’m able to be around a ton. So my daughter gets to be around the band. Ten guys in the basement rocking, and everyone is hanging out and screaming heavy metal and smoking weed while she just goes to school. Everything seems normal to her, so it’s just part of her life now. So, as far as parenting is concerned, as long as you’re around and actually try to be good at it, she’s gonna see everything going on around her as normal—which makes me afraid for her rebellion phase. The one thing she might not think is boring enough is tattoos. And I have a ton of them. But for some reason, that’s the one thing I don’t want her to get into. Can’t figure out why.

Has she seen you guys play yet?

Whenever we play in DC, there’s a 70-80 person guest list. Backstage is a serious party, so it’s not the best place for a five-year-old. Just not a good environment. I don’t really know what age it’s appropriate for your kid to be around a bunch of crazy ass shit like that. I’m hoping I just know. I guess like, around her teenage years. The thing is, she’s seen all my other bands, because we play protests and DIY venues and stuff. Those shows aren’t in bars and alcoholic nightlife settings. So, maybe by the time she sees a Darkest Hour show it won’t seem that much different for her.

Before we wrap up, I have to ask about the Washington Capitals. I read that you actually composed what they use as their goal song now. As a sports fan myself, primarily hockey, it seems like that would be living a dream.

Oh man, we actually did an earlier song, but the Capitals didn’t want anything to do with us. It was around the same time we put out the Hidden Hands of a Sadist Nation album. Years later we kept fucking with them and making new songs. I remember the dudes in the band were like, ‘You’re gonna make another Caps song?’ I had to go full on rogue! I put it together and ran into the room where people were hanging out and asked everyone to come in and just scream ‘Let’s Go Caps!’

So, finally a really old friend of ours joined the higher up staff for the Capitals and [we] were able to shop the song in a different way, able to present the band in a favorable light that was more aggressive and greedy than loud. So, then the morning talk radio started picking up Darkest Hour and playing it and once that caught on and people started using it in mashups and the team took us seriously. Then it went from a ‘fight song’ to the official goal song. We got invited to the game, and got to hang in the owner’s box. It was surreal.

Did you play hockey?

Yea! I grew up playing hockey, so I still skate every once in a while. But, the pads and gear are super expensive. I’m more of a runner now. Running is sick and you take all that anxiety and anger and you run it out. It’s bad for writing songs because you take it all out on the path. Our singer lives a more rogue, feral lifestyle.