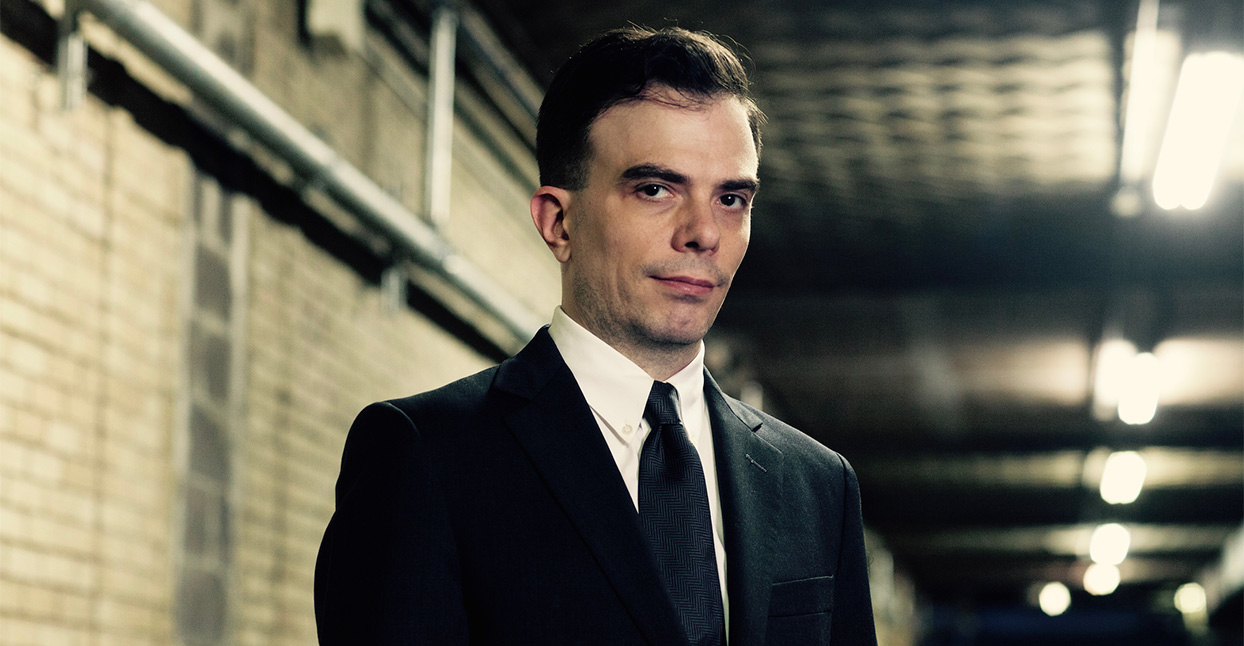 When Darcy James Argue chose U.S. conspiracy theories as the subject of his multimedia extravaganza for Brooklyn Academy of Music’s 2015 Next Wave Festival, he had no idea he would be inadvertently tapping into the national zeitgeist. In fact, the upcoming presidential election didn’t influence his choice at all. Instead, he was attracted to the conspiracies that shaped the 20th and early 21st Century after reading Kathryn Olmstead’s book Real Enemies: Conspiracy Theories and American Democracy, World War I to 9/11. “This probably sounds a little crazy,” he told collaborator Isaac Butler, “but read this book and tell me if you think there’s a show in there.”

Butler agreed: Yes, it was crazy, and yes, there was a show there. Covering everything from Edward Snowden and the notion of a “surveillance state” to the secret FBI within the FBI known as COINTELPRO, Argue’s resulting album, Real Enemies, sets these historical conspiracy theories to a score by an 18-piece big band, utilizing the 12-tone compositional technique frequently implemented by modern classical composers. (Coincidentally, it was also the favored technique of film composers in the 1970s—the height of paranoid cinema.)

Real Enemies is an ambitious project from an ambitious New England Conservatory and Grammy-nominated composer—and, eerily, it seems to have predicted exactly where we are as a country today.

Real Enemies was inspired by Kathryn S. Olmstead’s book of the same name. What made you want to embark on a project based around these ideas?

The book really gives you a vivid picture of what makes conspiracism attractive as a form of political ideology. It really crosses political boundaries. There are paranoid people on the right and paranoid people on the left, and commonalities on why they believe what they believe. Olmstead captures the circularity of it—the oppressed groups who are conspired against legitimately, and the conspiracies that emerge in response to the actual conspiracies against their own group.

There’s a famous line from Paranoid Style in American Politics which is quoted at end of album: ‘Time is forever running out.’ So clocks, and the doomsday clock, and that notion of we must act immediately because we’re in perpetual crisis, plays a big role in conspiracies—which lead naturally to using the clock and its 12 cardinal points as an organizing device for the piece.

Did the 12 points of the clock inspire you to use 12-tone compositional techniques?

Yes. Each chapter has a particular form of the 12-tone row. There was a conspiracy theory about 12-tone music, particularly in the mid-‘50s, that these 12-tone composers took over the classical music establishment, and were running all of the universities and dictating all of the awards and grants. If you weren’t a 12-tone composer, you were anti-progress—you weren’t a real modernist. You were reactionary, and not serious as a composer. It was irresistible to bounce off of a style of music that has a bit of paranoid thinking attached to it.

The nice thing about those high modernist 12-tone devices is that they can generate some really creepy sounds, as in the soundtracks for Parallax View, All the President’s Men and Klute. Twelve-tone really shaped the sound of cinematic paranoia in the 1970s.

You’ve mentioned the circularity—ideas that would lead to other ideas. Where was your starting point? It seems pretty overwhelming.

We had this idea that one thing that’s common to any type of conspiratorial argument—and the documentary Loose Change, the original 9/11 truther documentary, is a perfect example—is that it starts with the stuff that everybody knows and that is uncontroversial and completely accepted, and gradually starts pushing at the boundaries, asking questions about certain things that we know to be true. Gradually, it moves outside this circle of commonly accepted and universally known truths.

When you get out from that level of informed speculation, the next level is crazytown—’jet fuel can’t melt steel beams,’ and that kind of thing. But they never start with that. They start with the things that we all know and understand to be true. So we tried to follow that same circle, that same pattern of pushing outwards.

You state that, “the belief in conspiracy theories is one of the defining aspects of our modern culture,” and go on to describe the phenomenon as comforting. You say it’s more reassuring “ to believe that bad things happen because they are part of a hidden agenda than it is to believe that they came about as a result of mistakes, ineptitude, or random chance.”

Part of the attraction of conspiratorial thinking is that you don’t have to admit that you lost, fair and square. You engage in the democratic process, and you tried to advance your goals your values, whether through a candidate or a movement. But if you fail, it’s not because the people aren’t on your side—you fail because the deck is stacked against you because there are sinister forces controlling everything. The fix is in—and, let’s be honest, sometimes the fix really is in. There are legitimate conspiracies out there—but the attractiveness of conspiratorial thinking as an ideology is that any failure you have is because there are powerful forces controlling everything that happens. It is also comforting to think that there is a plan, even if it’s a sinister one. The desire for order in the universe is something that unifies a lot of conspiratorial thinking.

Now that you’ve gone deep with conspiracies, has your relationship with them changed?

When I first started writing, I really did not anticipate that someone who was best known as a reality show host, and politically best known for questioning the president’s birth certificate, would become a major-party presidential nominee. It’s been an interesting journey to see the paranoidization of American politics come to the fore in all kinds of completely insane and unforeseen developments—like Trump inviting Russia to spy and then the realization that, nope, they’re already doing that.

On the other side, there’s certainly a lot of conspiratorial thinking amongst some of the most paranoid of Sanders supporters believing somehow the primary had been stolen from them, and that somehow the DNC had rigged elections, that Debbie Wasserman Shultz was an incredible mastermind instead of an obviously massively incompetent official.

One thing I find fascinating about conspiratorial thinking is that there really is a kind of almost faith in competence in the idea that Debbie Wasserman Schultz is so good at her job that she could actually fix all these elections, as opposed to being someone who is actually spectacularly bad at her job. One of the things I find very endearing is that conspiracy theorists, who have a view of themselves as being the most cynical about some aspect of our society are also, in a way, the most optimistic about the competence of the villains they oppose.