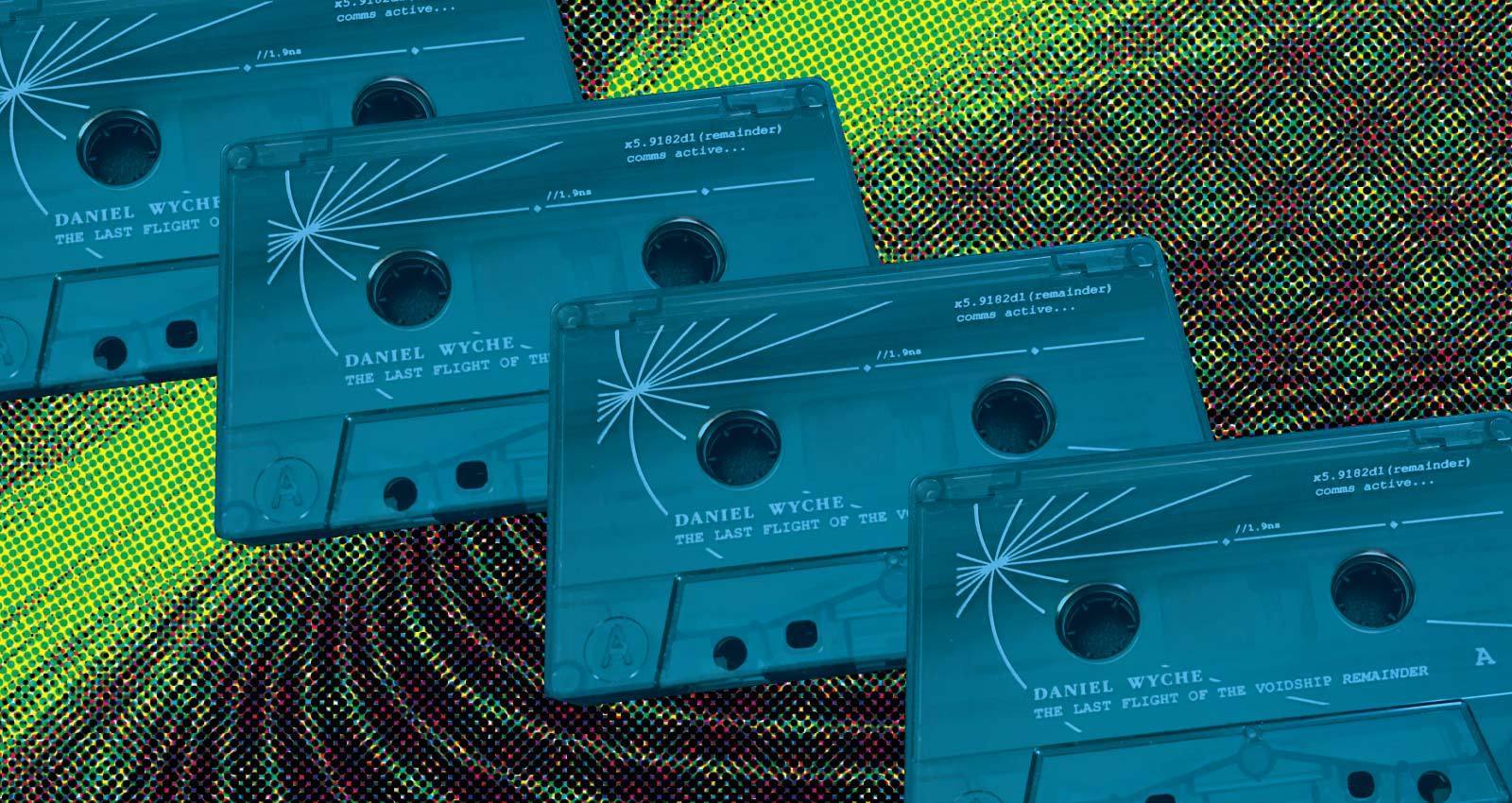 “If I recall correctly,” says Chicago musician Daniel Wyche, “there were people from other universes that had ended up here somehow, either on purpose or by accident. And our job was to get rid of them in some way.” He’s talking about a dream he had, one that spurred the creation of his collection The Last Flight of the Voidship Remainder. Wyche is an experimental guitarist with a deep love for classic science fiction. He’s also afflicted with a sleep disorder in which he wakes up during REM cycles, allowing him to remember alarmingly specific details from his dreams. In fact, the title for Remainder came from his dream—it was the name of a “voidship” whose purpose was to cross the “void” between two universes and bring back the knowledge its crew gained. Some ships were destroyed, and some “pierced the breach.” But did any fully cross? Did they achieve their goals? It’s unclear; but Wyche’s music is meant to be a memorial—in the dream, he was commissioned to create the music as a love song to the ships.

In creating the universe for The Last Flight of the Voidship Remainder, Wyche wanted to leave out the easy answers, but also forego any of sci-fi’s darker tropes. “Star Trek is the baseline for me,” Wyche says, “and one of the unique things about Star Trek is that it presents a utopia.” Wyche points out the ease with which speculative fiction gravitates to dystopia, and its tendency to utilize cynicism, weaponizing ambition to the point where any character who’s attempting to reach great heights is acting out of hubris or greed. “I think it’s incumbent on us to imagine positive futures,” he says. “Maybe it’s a just society where all of the resources, abilities, and imagination of the people in it—whether of one species or another—are being sustained and fulfilled.”

The sounds on The Last Flight of the Voidship Remainder largely come from guitar effects—ring modulators, delays, filters. The ring modulator in particular has an interesting conceptual link to the record. Built in the 1930’s, it was crucial to the development of electronic music; Stockhausen used ring modulation often. But it was also heavily used in science fiction: the 1956 film Forbidden Planet utilized the tech for the first entirely electronic music score and the voices of the Daleks and Cybermen in the original Dr. Who were run through ring modulators. The device takes two input pitches and modulates them together, making a kind of bell or resonant tone. On lush, patient drone songs like “The Fire in the Lacquer House” and “The Sacrifice of the Voidship Heart of Hearts,” it’s easy to hear the effect of Wyche’s Moog ring modulator—its analog oscillator used in conjunction with the guitar produces a full sound that covers a large frequency spectrum. As Wyche combines this with other effects and layering, a swirling cyborg orchestra emerges: part organic, string instruments, part synthesizer.

Other songs, like “The Mutiny on the Voidship Pearl of Lisbon,” are more violent and rhythmic, sounding like a mixture of Maurizio Bianchi and Morton Subotnick. A droning guitar is turned into a queasy, churning soundwave via a 4MS Noise Swash—rising and falling pitches that move like dolphins through water.

The record may not offer a clear answer about what happened to the voidships, but the album instead subtly serves an appreciation of ingenuity and the pursuit of knowledge. There is a curiosity that’s emblematic of all of Wyche’s work on The Last Flight of the Voidship Remainder. Like the best science fiction books and movies, Wyche’s fictional universe is thoughtful and rounded, filled with the joy of creation and possibility and a responsible awareness of human history.