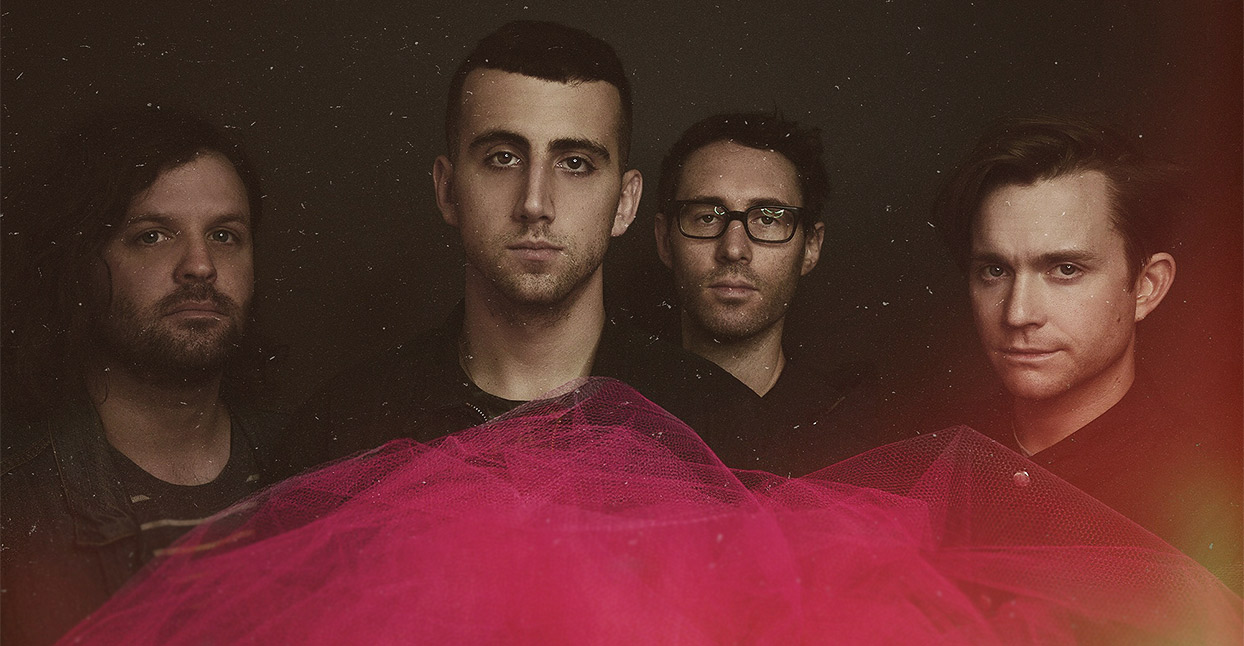 If you live in Philadelphia and ever need help moving your couch, Joseph D’Agostino’s your man. When he’s not fronting Cymbals Eat Guitars, the musician becomes the mover, hauling furniture and overstuffed boxes around town to make ends meet. But don’t pity him for his strenuous day job: to D’Agostino, lugging around armoires and bedframes is a sort of privilege, rather than a pain in the ass.

“I like this job because I don’t have to think,” he says over the phone. “I just go through my day, and it’s like doing Crossfit pretty much all day long, for hours at a time–and when I come home I’m pleasantly exhausted.” (If only we all felt the same.) It’s about the escape, and D’Agnostio’s spent a good chunk of his 27-year lifespan trying to get out of his own head. Like so many of us, the man’s got a rumination problem, a mobius strip of a mind; rather than producing daydreams, his brain conjures the object of his obsession ad infinitum. Compared to the ceaseless din blaring in his skull, the sweat and sore muscles sound almost pleasurable.

If heavy labor is D’Agostino’s sedative, then Cymbals Eat Guitars is his cure. With the help of his bandmates (the band’s current lineup comprises bassist and contributing songwriter Matt Whipple, keyboardist Brian Hamilton, and drummer Andrew Doyle), the artist’s fashioned the contents of his frazzled one-track-mind into four multi-track rock marvels, each more sharp, snide, and revealing than the last. Earlier this month, they outdid themselves yet again with Pretty Years, a polished set of urgent, acerbic anthems.

Until recently, Cymbals’ nine-year career was distinguished by continuous adjustments to their paradigms and personnel; the band started off playing heavy-lidded slacker pop on 2009’s debut Why There Are Mountains before a sharp turn into the world of unraveled psychedelia (2011’s Lenses Alien). It wasn’t until 2014’s critically-acclaimed, John Congleton-produced LOSE (D’Agostino’s cutting, concise tribute to his friend Benjamin, another work mired in rumination) that Cymbals arrived at their current sound, halfway between Shellac’s unbridled aggression and Springsteen’s stadium rock. “I feel like the first two records were training wheels for LOSE and Pretty Years,” the frontman says. “I’m really proud of all of our albums, but I just think that lyrically, I was able to come into my own after Lenses Alien, and I think LOSE was when I started to do my best work.”

Several months after dropping LOSE, satisfaction gave way to the restlessness. D’Agostino and his bandmates recorded “Aerobed,” a half-acoustic, half-electric show of dynamic strength produced by Brand New’s Jesse Lacey. They couldn’t have picked a better person to hit up for pointers, considering Lacey’s similarly transcendent accomplishments (namely, his successful liberation of the band from pop-punk pigeonholing on 2006’s much-lauded The Devil And God Are Raging Inside Me). Unsurprisingly, he advised the band to focus on melody and structure–to write “song songs,” as D’Agostino put it. Cymbals spent the next six months writing, ruminating, and rehearsing the new material, jamming twice a week for five to six hours at a time.

Whipple, who is the only member of the band still living in NYC, contributed more of the melodic structure and concepts for Pretty Years, while D’Agostino handled most of the lyrical duties. “I typically put together bits and pieces of music with guitar and various music apps/software instruments, play around with it until it has taken shape enough that the other guys will hopefully understand what I’m getting at, and then send it to Joe so we can bounce ideas back and forth. I always come in with a strong idea of what I want a song to be and it almost always ends up very different and much better,” he notes, via email. “I think the timeline we set for ourselves was what inspired me the most [writing for Pretty Years]… Joe had doubts that we could work that fast, and I convinced him that we could if we shared some of the work load. I think promising the other guys that I would step up and write a lot more than I had for past records was what lit the fire a little, and we fell into a routine that just worked.”

Painstaking preparation and lush production (courtesy of Congleton again) aside, Pretty Years is the sound of Cymbals at their most raw and unhinged: a natural consequence of the album’s blitzkrieg-like recording sessions last April. With the LP written and thoroughly rehearsed, all the band had to do was stride into the studio and plug in. Out came the songs one by one, each of them fully formed on the first take (save the glimmering ballad “Shrine,” which took multiple attempts), “Everything you hear is basically the first time we played it, the first time I sang it,” D’Agostino said. No wonder barnburners like the Boss-indebted “Dancing Days” and “Wish” sound so alive–what we hear is as it was. (“Wish” is Whipple’s favorite track on the album; he tapped out the bass line while on the subway one day and says it makes him “giddy” to think about how the song has evolved from those simple origins.)

While Pretty Years’ sonics represent the platonic ideal of living in the moment,  D’Agostino’s lyrical approach anchors the record firmly–and in a departure from LOSE, optimistically–to the past. Instead of detailing his battles with grief and guilt, the frontman relives his happiest moments, the memories that remind him (and us) of how lucky we are to be alive in the first place. “4th of July (Sandy),” for example, details the frontman’s near-death experience at the hands of an angry family while on the way to Philly on the titular holiday, thanks to his friend’s reckless driving (“When he rolls right over some family’s Roman candle/Cuts the engine, gets out, then lights a cigarette/The dad is spitting mad He brought a scary scary uncle/Gun in his waistband”); in that moment, he recalls, “My depression suddenly lifted/All the adrenaline shocked my nervous system/Swore I’d be present and grateful for every second.” The music certainly upholds that promise.

D’Agostino ventures further back in time as the album progresses, finally arriving at his childhood home in New Jersey: memories of days spent wandering aimlessly through malls with his mother to ease his anxiety (“Mallwalking”), playing Secret of Mana on SNES (“Well”), and hanging out at the Shore (“Shrine”). The LP’s title comes from home, too–more specifically, D’Agostino’s mother’s advice regarding his anxiety (“These are your pretty years; don’t waste them worrying”). “The album kind of veers into a very Jersey kind of hole there at the end,” he mused. “I think that stretch of the record is my favorite.”
It’s also Cymbals’ current mission statement. Near the end of “Shrine,” as the album approaches its conclusion, D’Agostino reveals the reasoning behind his nostalgic obsession, as well as our own: were it not for the happy memories (or perhaps the distraction of hefting heavy furniture) he’d sink right back into sadness to “shiver in the sunshine/and long for missing time.” The solution’s in the songs, and right now, D’Agnostio’s feeling pretty good about them, although he’s not sure where to go next. “I just feel like we’ve reached peak Cymbals Eat Guitars,” he joked. “I guess we have to make, like, our Kid A or something.” In the meantime, there are shows to perform, songs to brainstorm, and perhaps a cabinet or two to move.